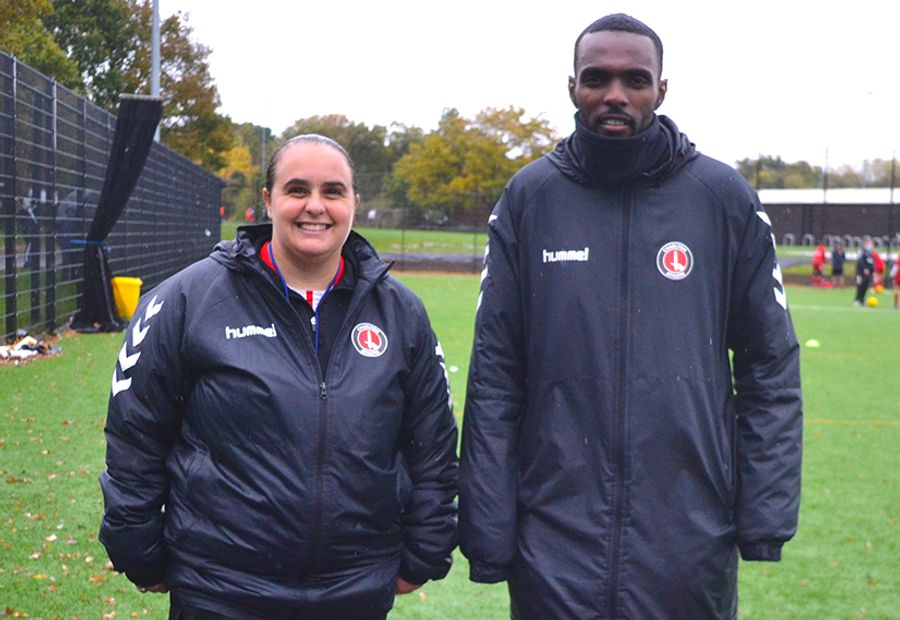 While serving a prison sentence for county lines offences, Jay Adams reflected on the actions that caused him to end up in a cell.

Never could Jay (pictured above, right) have imagined he would be able to turn his life around and, with the help of Charlton Athletic, become a positive role model for future generations.

"I would sit and think about how I got to that point in my life and the effects my offending have had on my community and wider society," he explains. "I realised I wanted to change and be part of the solution."

With the support of mentors and a philosophy class, Jay began to understand the consequences of criminal behaviour and the impact on individuals and society.

So when an opportunity to work with Reading FC Community Trust to deliver workshops on county lines came up, Jay did not hesitate to get involved.

After his release, he was introduced to Charlton Athletic Community Trust (CACT), who felt Jay could play an important role in the crime reduction team.

He became a mentor to some of the hardest-to-reach young people and in forming partnerships with the Police and social services, Jay started to make a huge impact.

He works with families and young people on a daily basis, providing support and guidance.

"I have been with CACT's mentoring team for over a year now and it's been a very rewarding journey," Jay says.

"I am in a unique position to help young people understand there is future, that we can overcome our mistakes and obstacles and choose a better path.

"We are not all perfect. We fall, we break, we fail, but then we rise we heal and we overcome any obstacle and this is the message I try to get young people to understand. Its very rewarding to know a young person tries to emulate the sort of character you admire and to choose you as a role model."

Jay has recently been appointed as a full-time Premier League Kicks officer at CACT.

And his inspirational story has led to him being honoured as part of the 10-year anniversary celebration of the Premier League Charitable Fund.

"Jay's journey is nothing more than remarkable and this is truly down to his own personal development and determination," says Paul Robinson, CACT crime reduction/mentoring manager.

"It is a true story of change. He has been able to recognise the damage of his past actions and is determined to make significant changes for himself and for everyone he comes into contact with. I couldn't wish to have anyone else working within the team."