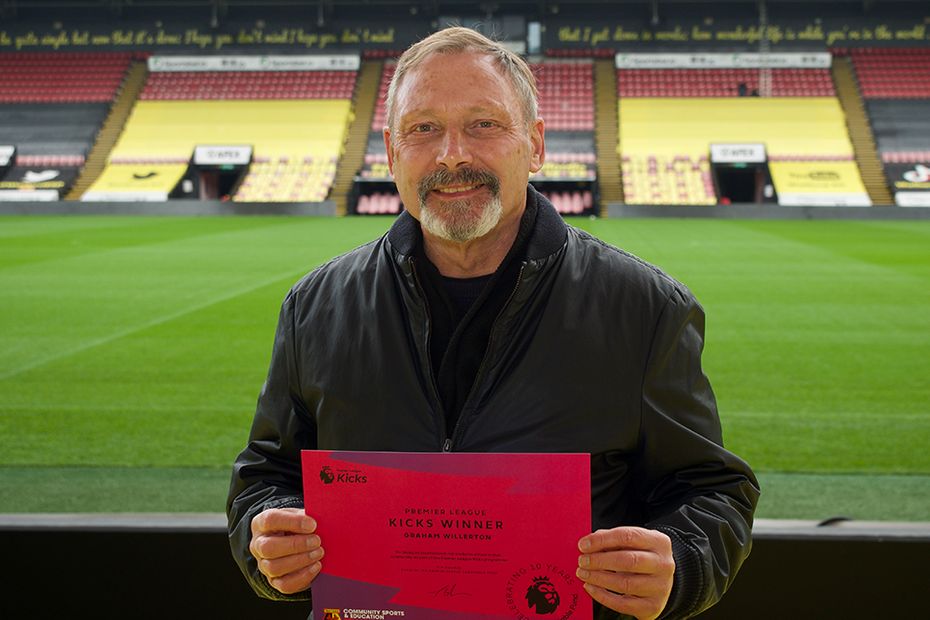 Police officer Graham Willerton has combined his love of coaching and desire to provide positive activity for young people in Hertfordshire to good effect, turning a once-a-week kickabout to daily football sessions attracting over 100 people.

"The sessions give young people a focus and keeps them occupied in the evening," Willerton says. "They form lasting friends with people from different backgrounds and schools which helps strengthen our communities."

Through his work as a police officer, Willerton knew boredom and lack of opportunities could often lead to anti-social behaviour and criminal activity.

So he got involved with local club Watford and their Premier League Kicks programme to create opportunities for young people to keep them off the streets of Harrow, Watford and Hillingdon.

"Young people were really keen to get involved, we were getting over 100 turning up to every session, even in the rain, it was incredible," says Willerton.

As demand grew, Willerton turned his hand to fundraising and secured grants and sponsorships that enabled him to set up fixtures around the country and overseas.

"It was a fantastic thing for the young people," he says. "Some of them had never been out of their hometown before, let alone abroad. The experience for these young people was lifechanging and they really appreciated it."

As recognition for his contribution, Willerton has been named the winner of the PL Kicks award as part of the Premier League Charitable Fund 10-year anniversary celebrations.

"Graham was one of the first coaches to get involved with the Premier League Kicks programme and has been an advocate for youth diversionary activities for more than a decade," Sean Flaherty, community development manager at Cedars Youth & Community Centre in Watford says.

"I couldn't think of anyone more deserving to win this award.

"His longstanding commitment and understanding young people and his talent as a coach and mentor has benefited hundreds of young people in our community."

Reflecting on his achievement, Willerton says: "We had some great times with Watford and the Premier League Kicks programme.

“It was brilliant to see the enthusiasm of the young people and watching their confidence grow over time is fantastic.”

Now retired, Willerton remains connected to Watford and the programme and during this year’s lockdown, he continued to support the community by getting involved, delivering newspapers and supplies to vulnerable residents.

“It’s lovely to receive this award and a real surprise, but I just like to help out where I can,” he says.