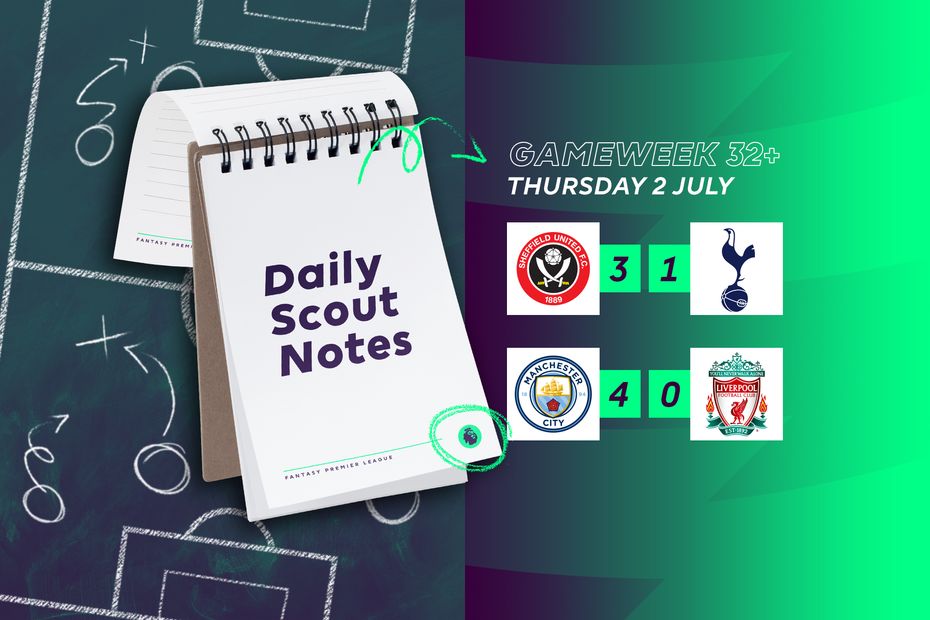 A late Harry Kane (£10.9m) goal provided some relief for the 354,000+ managers who handed him the armband against Sheffield United.

The Tottenham Hotspur forward has now scored in back-to-back fixtures for the first time since Gameweek 20, having also netted against West Ham United.

Son Heung-min (£9.8m), meanwhile, supplied his second assist in as many matches.

Their next two opponents, Everton and AFC Bournemouth, are among the seven teams who have conceded the most goals this season.

Kane also has a fine record against the Toffees, scoring twice in each of his last four meetings.

Sheff Utd welcomed back two of their defensive regulars against Spurs.

Goalkeeper Dean Henderson (£5.2m) had been ineligible to face his parent club, Manchester United, in Gameweek 31+, while centre-back John Egan (£4.5m) was available after serving a one-match suspension.

But they were unable to prevent their side from conceding for the third successive match.

They face three of the top six teams, Wolverhampton Wanderers, Chelsea and Leicester City, from that point.

Kevin De Bruyne (£10.7m) extended his lead at the top of the FPL player standings with a converted penalty and an assist in Manchester City's 4-0 win over Liverpool.

The Belgian's spot-kick duties have lifted his potential to another level in recent months.

Foden, meanwhile, continues to look outstanding value in FPL. The young midfielder has four goals and one assist in his last three matches.

He has started two of his side's four fixtures since Premier League action resumed, totalling 34 points.

Man City's performance against the champions looks very encouraging ahead of a strong upcoming schedule.

According to the Fixture Difficulty Ratings (FDR), five of their final six matches score only two.

Mohamed Salah (£12.6m), the top captain pick for Gameweek 32+, proved a major let-down for the 1.1m managers who handed him the armband

Nonetheless, he has the chance to immediately make amends this weekend against Aston Villa at Anfield.

Salah has scored 15 goals at home this season, at least five more than any other player in FPL.