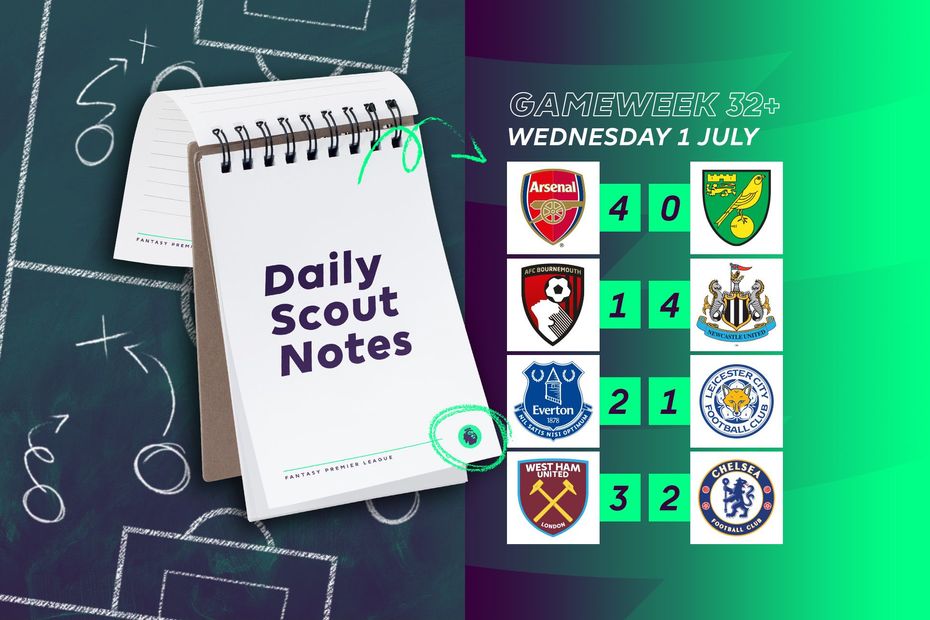 Owned by just 1.7 per cent at the time, the winger proved a major differential by supplying three of the visitors' assists at Vitality Stadium.

That contribution earned Saint-Maximin his season-high haul of 15 points in FPL.

He has now totalled 37 points in the last four Gameweeks, also scoring twice in that period.

Meanwhile, Dwight Gayle (£5.0m) justified his return to the starting XI by netting the opener. The striker has now scored in back-to-back matches for Steve Bruce’s side.

That also suggests the Magpies' cut-price defenders could be worth considering.

They have three clean sheets in their last five matches, conceding only two goals.

Three of Newcastle's starting back four against the Cherries - Jamaal Lascelles, Emil Krafth and Javier Manquillo - all cost just £4.3m in FPL.

AFC Bournemouth, however, have a far less promising run-in.

Eddie Howe’s men face four of the top eight in the next four Gameweeks.

Two goals and an assist against Norwich City helped Pierre-Emerick Aubameyang (£11.0m) to the top of the FPL forward standings.

The Arsenal forward overtook Jamie Vardy (£9.7m) by a single point at the summit after recording his season-high haul of 16 points in the 4-0 win.

While that delighted the 823,000+ managers who handed him the captain’s armband, Arsenal’s upcoming schedule has prompted heavy sales.

Aubamayang has already been moved on by 48,000+ managers ahead of matches against Wolverhampton Wanderers, Leicester City, Tottenham Hotspur and Liverpool in the next four Gameweeks.

There was disappointment for owners of cut-price pair Bukayo Saka (£4.7m) and Eddie Nketiah (£4.4m) as both were left out of the starting XI.

Managers seeking a budget pick up front should instead consider Mason Greenwood (£4.4m) of Manchester United, who plays at home against AFC Bournemouth this weekend.

Norwich, meanwhile, have now lost all three of their matches since Premier League action resumed, failing to score a single goal.

Furthermore, head coach Daniel Farke has made five substitutions in each of those fixtures.

Combined with their lack of form, the increased risk of rotation suggests Canaries players are best avoided for the run-in.

The left-back has been a big success at both ends of the pitch since Premier League action resumed.

And his run-in suggests he could be a key target in defence from Gameweek 34+ onwards.

After Monday's trip to Tottenham Hotspur, Everton’s final five matches score no more than three according to the Fixture Difficulty Ratings (FDR).

That schedule also looks encouraging for Richarlison (£8.3m) and his 10.2 per cent ownership.

The Brazilian scored his 11th goal of the season before being forced off with a knock before the hour-mark.

However, manager Carlo Ancelotti is optimistic Richarlison will be available to face Spurs.

Meanwhile, cut-price forward Anthony Gordon (£4.5m) has started two of the last three Gameweeks on the left wing. He supplied the assist for Richarlison’s strike.

For Leicester, Jamie Vardy (£9.7m) endured a frustrating evening, recording a blank for his 27.6 per cent ownership.

The Foxes' frontman has scored just twice since Gameweek 18 and his upcoming schedule could persuade many owners to consider selling him.

Five of Leicester’s remaining six matches score at least three in the FDR.

The Brazilian scored both the Blues’ goals and appears to be on penalty duties when Jorginho (£4.9m) is not selected.

He has now recorded double-figure hauls in three of the last four Gameweeks.

The wingers look the most appealing options in the Blues’ attack, with Tammy Abraham (£7.5m) and Olivier Giroud (£6.6m) rotating in the lone striker's role.

Owned by just 5.0 per cent and 6.6 per cent respectively, Willian and Pulisic have the schedule to thrive as major differentials.

For the Hammers, Michail Antonio (£6.9m) produced a goal and an assist for the second time in five matches.

Listed as a midfielder in FPL, his role up front makes him their standout pick ahead of a fine run of opponents.