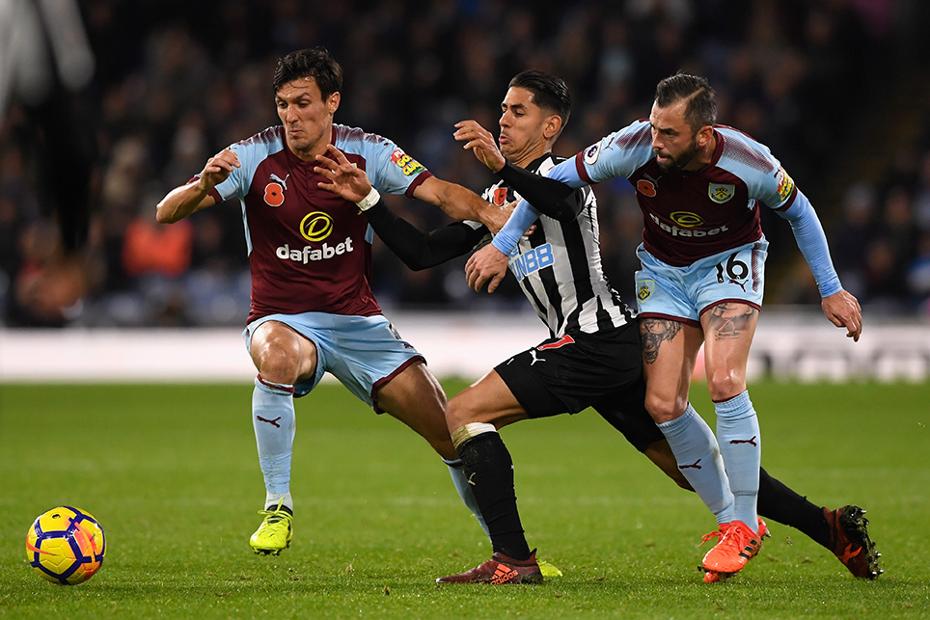 While the back four are taking the credit for Burnley's standout campaign, Adrian Clarke praises their unsung midfield duo

Burnley’s back four have been lauded for their defensive record this season, but ahead of the visit of Tottenham Hotspur Adrian Clarke says the two-man shield in front of the back four deserve just as much credit.

Jack Cork and Steven Defour have struck up a productive yet unheralded partnership for Burnley.

One of only two central midfield pairings to have started every Premier League match – the other is Brighton & Hove Albion’s Davy Propper and Dale Stephens – they form a vital layer in the Clarets’ make-up.

Without their contribution Sean Dyche’s men, who have conceded only three goals at Turf Moor this term – and only 12 overall, would be far less awkward to break down.

It is the duo’s combined physical effort that really stands out.

Shifting from side to side to break up play out wide as well as infield, Cork and Defour are relentlessly active, covering every blade of grass inside the middle third.

They are comfortably the top two in Burnley’s rankings of distance covered.

Cork has run the furthest of any top-flight player this term.

With a remarkable average of 12.18km covered per 90 minutes the 28-year-old is also ranked the fifth hardest-working player in the division of all who have been on the pitch for at least 50% of the season so far (810 minutes).

Pascal Gross, Cesc Fabregas, Andrew Surman and Christian Eriksen are the only players who can top that figure.

Cork and Defour offer not just work-rate for Dyche. They are also his side’s best passers.

Keeping possession with assurance for a side not noted for secure ball retention, Defour (84.8% pass accuracy) and Cork (80.9%) add quality.

Delivering an all-round game, the pair are integral to the manager’s plans to make Burnley a better side to watch.

But first and foremost, they are strong defensive midfielders.

Forming a reliable barrier in front of the back four, they do plenty of the dirty work.

Cork harries opponents at both ends of the pitch.

No Burnley player has won back more possession inside the attacking third, thanks to his pressing. Yet, at the other end, he regularly puts his body on the line, blocking shots.

Of all the Premier League’s midfielders, Cork shares top spot for the most blocks.

Midfielders with most blocks

Defour has adopted a slightly deeper role this term, and it’s working well for the Belgian.

While still capable of creating chances or taking shots, Defour’s primary focus is to win possession back for his side.

It’s a responsibility he handles superbly, with interceptions his speciality.

Most interceptions by midfielders in 2017/18

Spurs will start as favourites when they visit Turf Moor on Saturday, but they know that winning that all-important midfield battle will be tough.

Cork and Defour make life difficult for whoever they face.

Their determination to win loose balls sets the tone for Burnley.

Retrieving possession inside the middle third a total of 139 times, they are the only two players from the same club to appear in the division’s top 15 in that department.

It is hard to think of a more committed midfield pair.