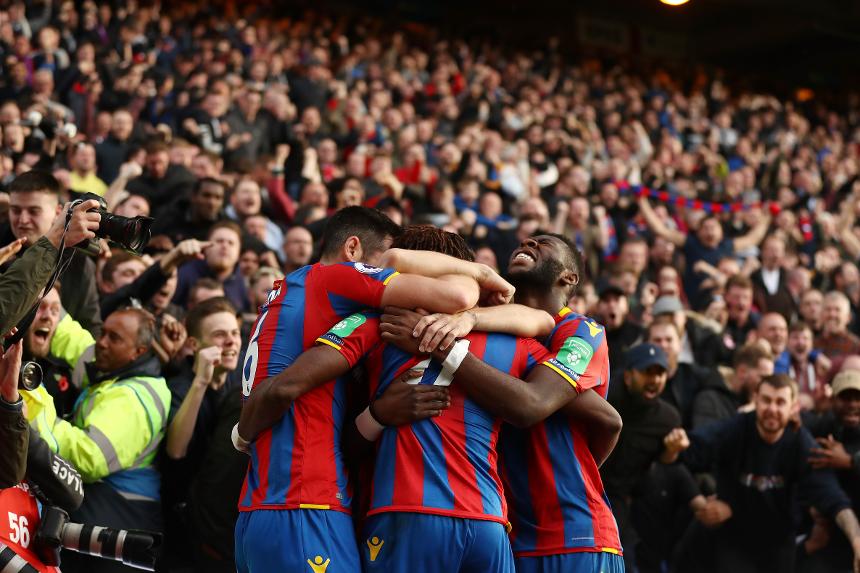 Palace began the season looking uncomfortable playing three at the back, so Hodgson immediately moved from that shape.

Hodgson’s predecessor, Frank de Boer, had switched to a 4-3-3 at Burnley, his final match before departing, but after a short period of transition Hodgson settled on an uncomplicated 4-4-2.

The Eagles have not deviated from that since beating Chelsea in Matchweek 8 and the continuity has improved the balance of the side dramatically.

Using players at ease in their positions within that shape, both on and off the ball, there is more cohesion.

It is no coincidence they have kept three clean sheets in the last five matches.

The current XI is virtually unrecognisable from the side who began the season.

Hodgson swiftly earmarked the players he prefers and was unafraid to make sweeping changes.

All five have become influential, alongside those who have continued to feature most weeks.

Hodgson wasted no time transforming the Eagles into a side who suit his philosophy.

After spending hours every week on drills that explain how to defend as a team, Palace are a significantly tighter unit under Hodgson.

It took several weeks for his famed organisational skills to sink in, but, since their 4-0 defeat by Manchester United at the end of September, the Eagles have conceded a goal every 81 minutes.

Prior to that it had been every 45 minutes.

Andros Townsend, Wilfried Zaha, Ruben Loftus-Cheek and Christian Benteke have been asked to defend from the front with more intensity and this has had a ripple effect across the rest of the team.

Cabaye has won 42 interceptions, more than any other Premier League player except Arsenal’s Nacho Monreal.

Playing in a more defensive role, the Frenchman is building a sturdy partnership alongside the combative Milivojevic.

In goal Speroni has been better protected. He has faced one fewer shot on target per match than Hennessey, but his form has also been more reliable.

It should not be forgotten that Zaha was missing for six of Palace’s first seven matches, a traumatising losing streak.

Since then Palace have averaged 1.7 points a match, with Zaha their talisman, scoring four times.

If Hodgson has benefitted from Zaha’s form, he also deserves credit for transforming him into a striker.

Deciding his skills were best served inside the final third, the Palace boss has given Zaha free rein to torment opposition defenders high up the pitch.

Whomever he has partnered, Zaha’s pace, skill and athleticism have given Palace a new dimension.

Defenders have looked extremely nervous when Zaha runs at them. This edginess has forced mistakes.

Using Zaha exclusively in forward areas is a masterstroke by Hodgson and it is paying off.

Hodgson is renowned for improving fitness levels on the training field and this behind-the-scenes work has reaped rewards.

On average the Eagles are making about 40 extra sprints per match under their new manager, but it is their strength in the second halves of matches that stands out as the major uplift.

In the weeks that have followed that watershed victory against Chelsea on 14 October, Palace have scored five goals in the last 10 minutes of matches, conceding just once.

They are finishing matches so much stronger.

Under Hodgson the Eagles are fitter and have shown an appetite for the fight.