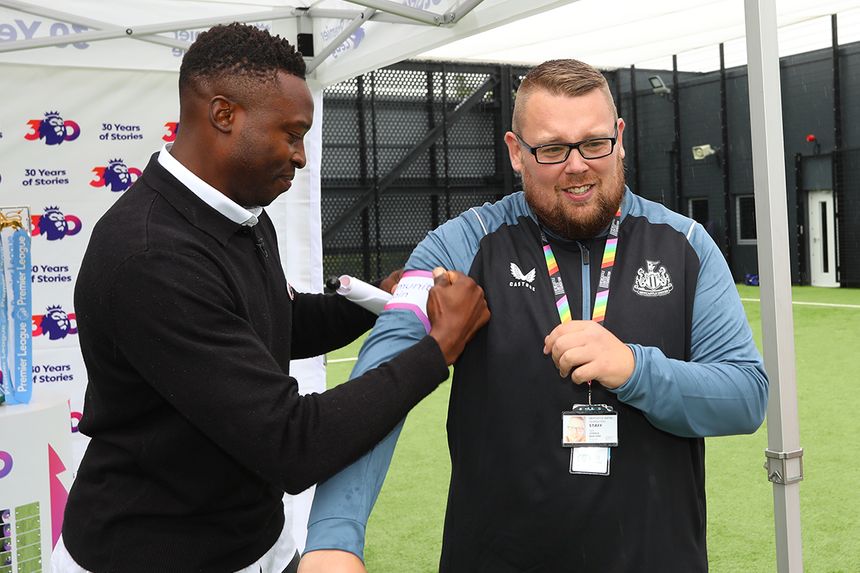 As the rain pours down on the Newcastle United Foundation building, there are smiles galore on the 4G pitch on the roof, as a range of football sessions run throughout the day.

One of those smiles belong to Foundation staff member Josh Banyard, who unbeknown to him will be presented with the Premier League Community Captain award.

It is a befitting honour for Josh as the award recognises some of the extraordinary work he has conducted throughout his time at the Foundation, including a 273-mile charity walk from Wembley Stadium to St James' Park over five days.

The walk raised money for the Foundation and particularly its "Be A Game Changer", a programme which is very close to his heart as he credits it for saving his life.

"My mental health has been bad since I was a teenager," he says. "At first it was more depressions and anxieties, which I thought was natural...but as I grew older it grew into more in-depth versions of depression."

Josh speaks openly about how he dealt with suicidal feelings and thoughts on multiple occasions, and how his love for Newcastle United and then the club's Foundation kept him going.

"I was lucky to fall into the programmes I ended up falling into but without that club, set-up, the fans and the friends I had met through the team, I wouldn't be sitting here today."

Josh specifically praises the Be a Game Changer programme, an initiative designed to get men speaking openly about their emotions and feelings.

This is especially important in the North East where male suicide rates are the highest in England and Wales, showing the urgency of addressing mental health.

"Without their support, guidance, love - I wouldn't be here," says Banyard. "Suicide was on the forefront of my mind and I didn't want to be here."

Having experienced the love and support from the Foundation at his lowest point, it seems fitting that now a large part of Josh's focus is on giving back to his community by supporting others in the way he was.

While he recognises that mental health is a continual work in progress, he is feeling better and cherishes his position at the Foundation to be able to be the difference.

When discussing Josh with others at the Foundation - they have nothing but positive words to say.

Colleague and friend Thomas Graham tells of how Josh's story has inspired him in both his work and personal life to help influence change. He is far from the only one thinking this.

When I ask others in the Foundation to describe Josh, words such as "legendary", "incredible" and "passionate" are used. But for others, words don't do Banyard's personality justice.

As my conversation with Josh draws towards an end, we naturally discuss football, as well as delving into his journey into following Newcastle and how he's feeling for the club's prospects this season.

It is clear to see how much the area, the team, the Foundation have done for him, and his recognition as Community Captain symbolises how he has grown into exactly the person he needed and now others need.