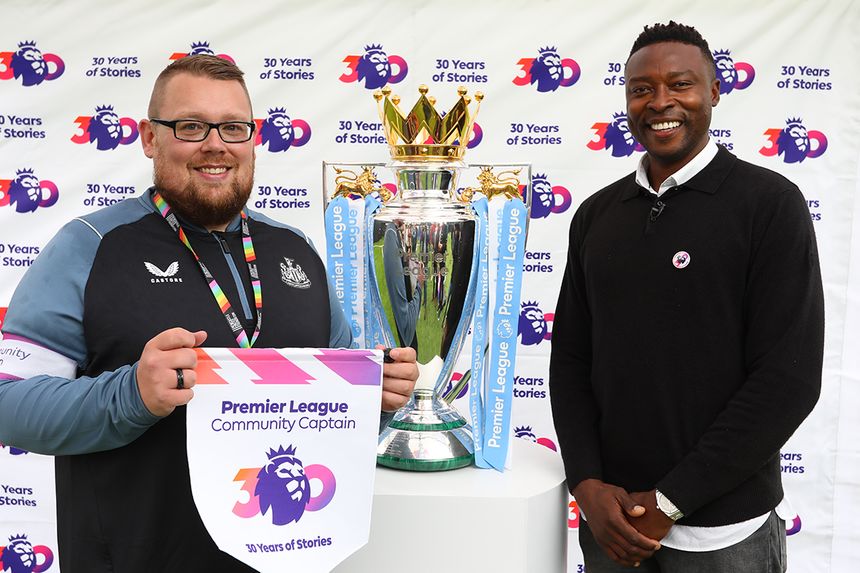 Josh Banyard has been named as a Premier League Community Captain by Newcastle United in recognition of his incredible feat raising awareness and funds by walking 273 miles from Wembley Stadium to St James' Park to support the club's "Be A Game Changer" mental-health programme.

The 35-year-old works for the Newcastle United Foundation as a sessional member of staff, having first started as a participant four years ago. He credits the Be A Game Changer programme with saving his life.

"Be A Game Changer is a life-saving campaign and I'm the life that is saved," Banyard said. "I was struggling with my mental health and felt worthless and the Foundation helped rescue me from a dark place.

"To find a group of like-minded people through the campaign has been amazing and it has helped me completely transform my outlook on life.

"I'm so delighted to be named a Community Captain. I'm hoping it helps shine a light on the work that is ongoing with the campaign and even if it can help just one person, helping to change that one person's life makes it all worthwhile."

Launched in February 2019, Be A Game Changer aims to increase mental-health awareness and encourage Magpies' fans, and the people of Newcastle, to talk openly about their physical and mental health.

Activity includes group football sessions at NUCASTLE and regular online support group meetings. More than 1,000 people have been engaged to date, with 89 per cent of participants reporting feeling less isolated as a result.

See: How Be A Changer was a life-changer

"Josh's story is truly inspiring and it has been a pleasure to present him with the Community Captain award," said Ameobi.

"Mental health is a difficult subject for a lot of us, and it takes a very brave person to reach out to someone else and talk about their feelings.

"People like Josh, and campaigns like Be A Game Changer, are so important to break down existing barriers around mental health, and encourage people to speak out if they are struggling."

"Without the valuable support of the Premier League, we simply would not be able to run these vital programmes."

Since 2018, Newcastle United Foundation has received £450,000 of funding from the Premier League and Professional Footballers' Association towards delivery of wellbeing projects.

A £2m grant from the Premier League, The FA and Government's Football Foundation also helped with the creation of NUCASTLE, which opened in March 2022.

Across Newcastle, Northumberland, North Tyneside and Gateshead, the Foundation works with more than 50,000 young people and adults delivering a wide range of projects, including providing over 15,000 hours of Premier League Kicks football and multisport sessions for 11-16-year-olds last year.

"People like Josh are at the heart of our Foundation and the reason why we do what we do," said Steve Beharall, Head of Newcastle United Foundation.

"I am incredibly proud of him, as well as our teams, who continue to demonstrate an incredible commitment to get men talking about their mental health and, ultimately, save lives. Without the valuable support of the Premier League, we simply would not be able to run these vital programmes.

"It's an honour to be sharing in the very special 30th anniversary of the Premier League, which has provided so many life-changing opportunities for countless communities not only in the North East but across the country."