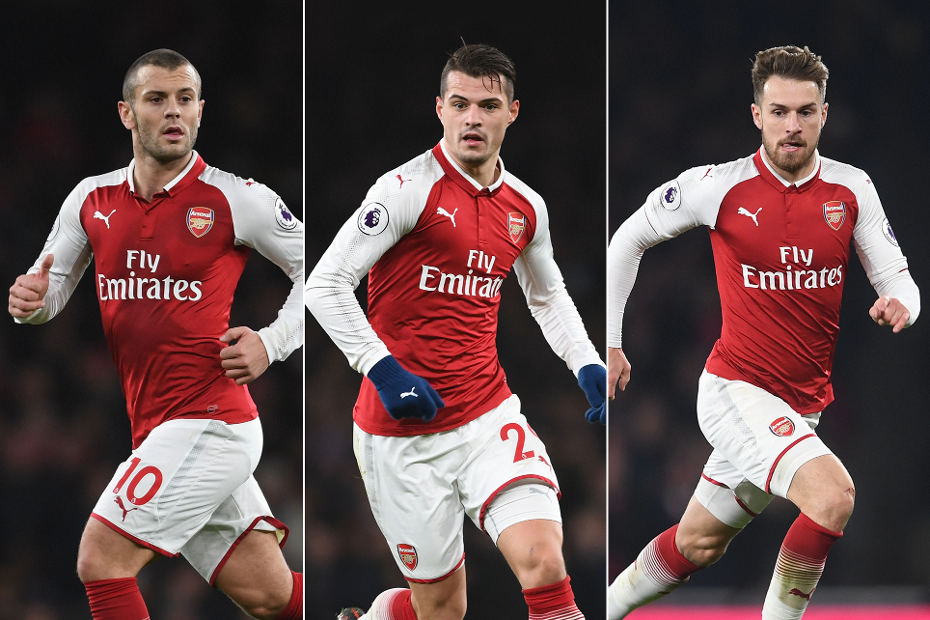 The arrival of Pierre-Emerick Aubameyang and Henrikh Mkhitaryan has given Arsenal a fresh feel ahead of the north London derby, but this weekend could also be the right time to try out a new-look central midfield.

It feels like an age since midfielders Aaron Ramsey and Jack Wilshere last started a match together in Arsenal colours.

Not since they appeared in a goalless draw against Sunderland on 20 May 2015, have Ramsey and Wilshere shared a place in the starting XI.

And, remarkably, it was six months before that when Arsene Wenger had previously selected them in the same side.

Could this weekend’s match at Wembley Stadium be the right time to reunite this combination?

It would be a smart move by Wenger.

Before he picked up an illness at the end of January, Wilshere had been in outstanding form.

The tireless Ramsey, who has happy memories of Wembley, having twice scored an FA Cup final winner there, is sure to be brimming with confidence after his hat-trick against Everton.

Although it would be interesting to see them link up as a duo, a home fixture would be far more suitable for that experiment.

Against Tottenham Hotspur a three-man midfield would offer better security with Granit Xhaka playing in between the two box-to-box players.

This combination is far better proportioned than when we saw Xhaka and Ramsey operate in advance of Mohamed Elneny at Swansea City on Arsenal's last away trip.

In possession, Ramsey and Wilshere would have licence to push on, one at a time, without leaving the central midfield empty.

Wenger has never started Xhaka, Wilshere and Ramsey together, but I see no reason why it couldn't work.

Why midfield changes are required

On the road this Arsenal side have toiled all season, so it can't do any harm to try something new.

Averaging only one point per match, letting in six more goals than they have scored, it has been a struggle to control matches played away from Emirates Stadium.

At home, when most opponents opt to concede territory, it has not been an issue to play with a midfield pairing with no true defensive specialist.

But away from home, using a pair in 11 of their 13 fixtures, they have not been able to gain a foothold as effectively as they would have liked.

Arsenal have been missing someone to break up play and recycle possession for their many attacking talents. They have been passive and regularly stretched.

They have also been unable to stifle the creation of opportunities against them, with 13 Premier League sides allowing fewer goals on their travels than Arsenal.

As shown in the table below Wenger does not have a standout midfielder who can provide a formidable central block.

*rotate to landscape to view table in full on mobiles

Defensively the team have suffered, but without a stable platform to build from, the service into Arsenal’s forwards has also been below par.

Leicester City, Watford and West Ham United have all scored more times on the road.

So until they recruit a strong and commanding defensive midfield player, extra numbers in midfield make sense.

Provided that Xhaka, Wilshere and Ramsey concentrate and stay disciplined, they have the capability to develop into an authoritative combination.

On the ball, as shown below, they have the quality to take the sting out of Spurs and provide that control which has often been missing.

As an offensive force I don't see Arsenal suffering at Wembley by adding a central midfielder in place of Alex Iwobi.

Mesut Ozil and Mkhitaryan thrive when they have space to create chances and both can be destructive from the flanks or in central pockets.

These two, along with Ramsey and Wilshere, provide Arsenal with enough imagination and quality to supply their star striker, Aubameyang, with the ammunition he needs.

This promises to be a wonderful, and extremely pivotal derby beneath the Wembley arch.

To give themselves the best chance of springing a surprise, Arsenal should at least consider trying something new in central midfield.