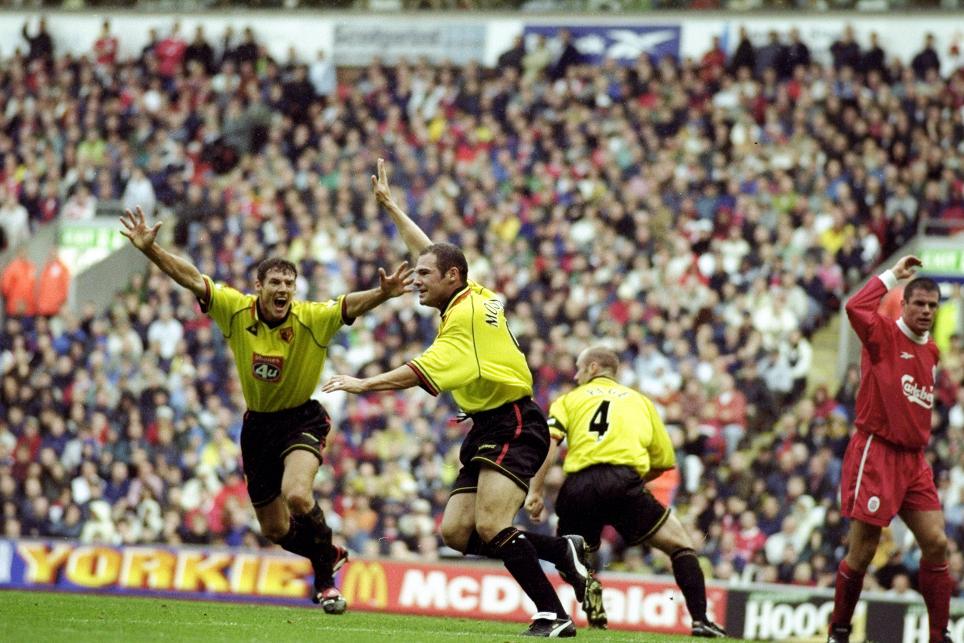 Watford returned for their third Premier League campaign in 2015/16 and they secured safety in the division for the first time, improving on their two previous 20th-place finishes.
Their debut came in 1999/00, following the impressive feat of back-to-back promotions to the Premier League.

Steve Palmer, ever-present in the top-flight that season, told premierleague.com that a notice from manager Graham Taylor with nine matches left of the regular Championship season inspired 23 points from their next 27, which secured a play-off place that they capitalised on with a 2-0 victory over Bolton Wanderers at Wembley Stadium.

Palmer said: "He broke it down into about 10 steps. Whether that was the stimulus or what, I don't know, but pretty much what he wrote on the board there actually happened.

"It culminated with that day at Wembley when we played Bolton. It was a fantastic day that was the highlight of my career. We had a good mix of players who were hungry, were prepared to work, bought into the ethics and principles that the manager wanted to play, and that saw us eventually secure successive promotions from League One to the Premier League.

"The manager was very clever with his recruitment. He brought in players who had been researched, were in the early parts of their career, were hungry to go on and had the right attributes for how he wanted to play, and they were prepared to work very hard."

Although the 1999/00 campaign started with successive defeats, Watford registered their first Premier League victory when Tommy Mooney scored a shock winner against Liverpool at Anfield and for Palmer, who had previously played in the PL with Ipswich Town, the occasion was an emotional one.

"Growing up in the 70s, Liverpool were the team to beat then,” he said. “I had been to Anfield previously with Ipswich, but that day, the part before the game was the most emotional I have ever felt on a football pitch, when Liverpool were singing 'You'll Never Walk Alone'. Then for us, to go on and win, I distinctly remember that great feeling coming home."

A win at Bradford City followed and their belief that they could stay up was enhanced when a Chelsea team full of international stars including 1998 FIFA World Cup winning captain Didier Deschamps, who lined up against Palmer, were humbled 1-0 at Vicarage Road.

Allan Smart fired in the winner to send the home fans into raptures, but then one-goal defeats to high-flying Arsenal and Leeds United sparked an 11-match winless streak for the Hornets.

Palmer, who played every minute of the campaign, admits that injury problems hit Watford hard, and Taylor stayed loyal to a squad largely assembled in League One.

"That just didn't happen for one reason or another. Perhaps it was because we played so many games during the past two years, perhaps it was the lack of breaks, but we had a whole spate of injuries that kept players out for a long time. We never had our strongest team available.

"He made a promise to the group that everyone would play in the Premier League. A couple of players moved on during that season. The team that started at Wembley never played together again.

“Certain players moved on. But he was true to that word. Everybody, even the squad players, played some part in the Premier League season."

A late goal from Jordi Cruyff gave United a 3-2 victory at Watford, while three goals just before half-time helped Sir Alex Ferguson's side run out 4-1 winners against the Hornets at Old Trafford.

"When we played them they weren't that good on the day," Palmer said. "They scored three goals at the end of the first half at Old Trafford and both games were relatively tight. But they finished 18 points clear so they were by far and away the best team in the league."

"They had an extra gear, they had a bit more quality when they needed it. Perhaps with us they did what they needed to do."