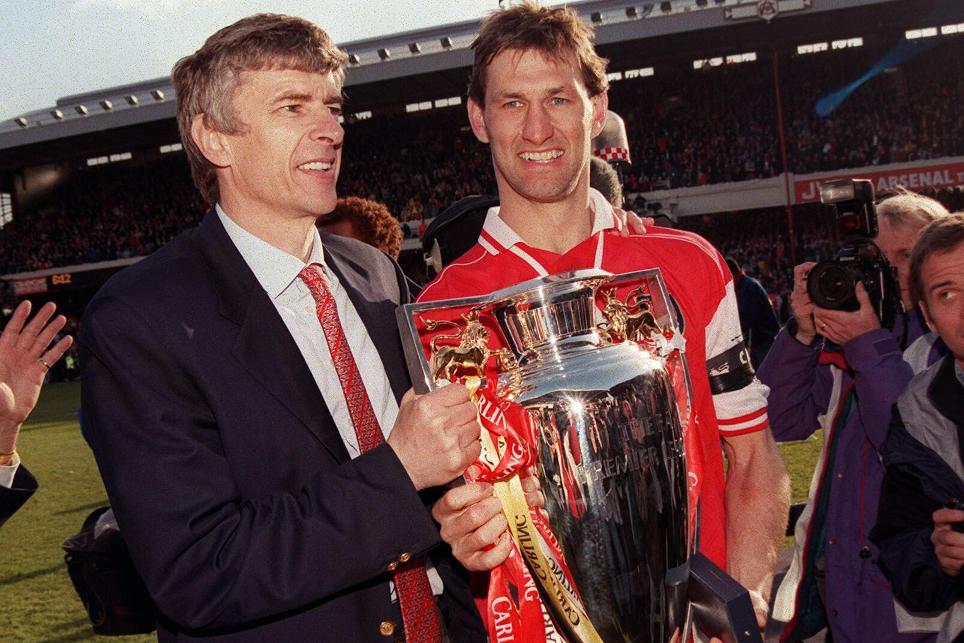 Long-serving Arsenal captain Tony Adams clinched the Gunners' first Premier League title with a volley that wrapped up a 4-0 win over Everton at Highbury in May 1998, and for another loyal servant at the club, it is a memory that will last a lifetime.

Nigel Winterburn, who won three league titles across 13 seasons with Arsenal, helped them overturn a 13-point deficit to topple Manchester United at the PL summit in Arsene Wenger's first full season as manager.

Left-back Nigel Winterburn was a key component of the rock-solid defensive foundations established under George Graham. But the Gunners developed an attacking style under Wenger, inspired by brilliance of mercurial Dutchman Dennis Bergkamp, and they overhauled defending champions Man Utd in thrilling fashion.

"It was such a significant part of my life," Winterburn said. "I'm always going to be really biased towards that season in my memories because it was such a great season for Arsenal."

Alongside Lee Dixon, Steve Bould and talismanic captain Adams, Winterburn was a member of English football's most miserly back-four, which operated in front of England goalkeeper David Seaman.

Wenger has often acknowledged his fortune in inheriting such a formidable defensive unit and the Arsenal old guard returned the gratitude by taking to the Frenchman's management techniques.

"We had a really competitive group at the football club that looked like it could achieve significant things."

Foremost in attacking flair to the defensive steel was Bergkamp, who netted 16 goals in 28 Premier League matches over the course of the campaign, including a breathtaking hat-trick at Leicester City. Winterburn was keen to point out that there was more to the former Ajax and Inter Milan forward's game than just silky skills.

"What he could do with a football, his vision and support of other players was truly immense," he said. "He was just a great player to play with and he had that ruthless streak about him as well that we saw on a few occasions. When players riled him that came out. I suppose that's what made him the winner he was.

"He had those few extra milliseconds to find a pass - where everybody else was thinking about making a pass or doing something, Dennis had already done that and the game was moving."

Despite winning plaudits for the revolution in their style under Wenger, Arsenal sat 13 points behind Man Utd at Christmas and the title was seemingly out of reach.

"I'd be completely lying if I said at that stage we were going to win the Premier League - it's impossible to say that," Winterburn admitted.

But a Boxing Day victory at home to Leicester City was the start of an 18-match unbeaten run for the Gunners.

During that time, Marc Overmars slotted in the only goal to see off Sir Alex Ferguson's Man Utd team at Old Trafford in March - the second of 10 consecutive wins that clinched the title.

"Once we beat Manchester United people then really believed that we had a fantastic chance of going on to win the title," Winterburn said. "When you beat a team that's as strong as Manchester United your confidence lifts.

"You hope that somehow you can dent their confidence, that in the next two or three games they drop points and you can capitalise on that."

It was left to Adams to add an iconic final flourish in Arsenal's last home match, a 4-0 rout against Everton that secured the championship with two matches to spare.

An FA Cup final win over Newcastle United later in May sealed a historic double, but the image of Adams completing the scoring at a sunkissed Highbury remains the defining one of an unforgettable season for Winterburn.

"Tony is associated as 'Mr Arsenal' and I suppose, in a way, it was always going to happen like that, that he scored the final goal," he added. "The way that he scored it and then his celebration I'll never, ever forget."