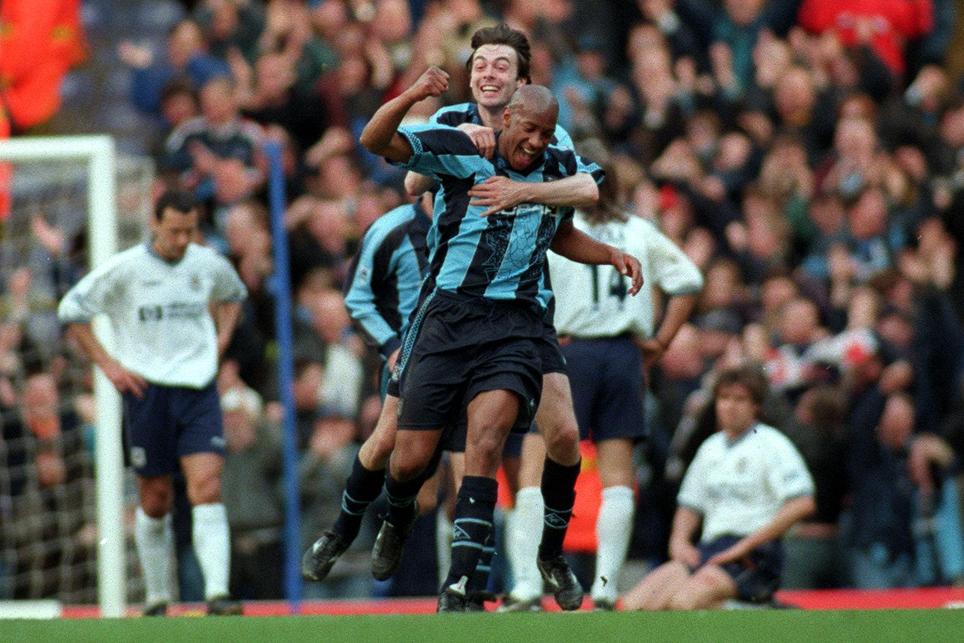 Coventry City were famed for their last-day escapes from relegation before they had to repeat the trick in the 1996/97 Premier League season. Dion Dublin was a catalyst for staying up on the final day survival, and the striker relived the campaign for premierleague.com.

The Sky Blues headed to White Hart Lane on the final day to take on Tottenham Hotspur with their fate undecided, the 10th time in 30 top-flight campaigns they had been in such a situation.

Dublin was leading the Sky Blues' fight against relegation, having found the net in wins over Liverpool and Chelsea the previous month. But the striker was feeling the pressure heading into a match Coventry needed to win while hoping other results fell their way.

"It was difficult," he told premierleague.com. "We had to get our heads right. It was very mentally draining.

"That week [Coventry manager] Gordon Strachan put a lot of pressure on us. We had to do our jobs. He picked out a few players, people like Paul Williams, Darren Huckerby, myself, Richard Shaw and Paul Telfer, senior players with a strong mentality and strong personality, to lead us out there.

"Sometimes it's the best way to do it – put pressure on people and you get the best out of them."

Strachan's calls for his senior men to step up were heeded as Dublin and Williams gave Coventry a 2-0 lead at White Hart Lane in a match that kicked off 15 minutes late due to traffic problems.

Paul McVeigh pulled a goal back for Spurs to force a nervy finish, but Coventry held on thanks to the heroics of their veteran goalkeeper Steve Ogrizovic. Middlesbrough's draw at Leeds United and Sunderland's loss at Wimbledon meant the north-east duo were relegated at Coventry’s expense.

"It was nervy, knowing that we had to hold on and doing what it took to stay in front, putting your body on the line," Dublin said. "We had players in the dressing-room that would do that.

Coventry steered clear of relegation trouble in 1997/98 with less drama, finishing 11th as Dublin netted 18 goals to earn a share of the Golden Boot and selection for England.

The former Manchester United player credits the fear of being drawn into another dogfight at the wrong end of the table with spurring him on to greater heights during the following season.

"I got the Golden Boot with Michael Owen and Chris Sutton that year and got an England call-up," he said.

"That was the effects of not wanting to be down there again and living with a summer where we'd just gone through a relegation fight – we don't want to do it again. And that's the way we started the following season."