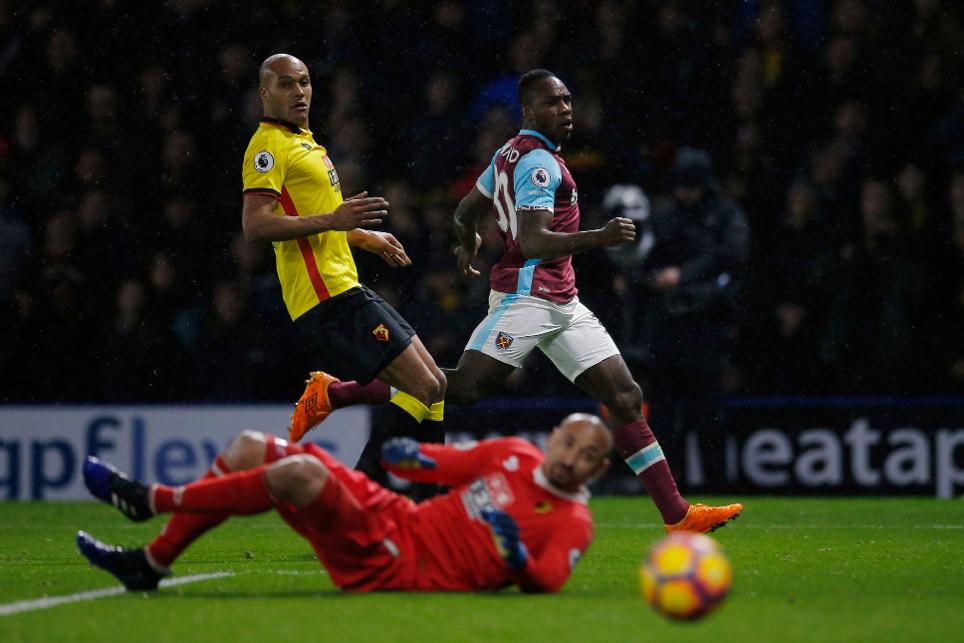 Fantasy managers urged not to lose faith in West Ham asset, who is the second-most transferred out midfielder

Tallying 26 in the Bonus Points System (BPS), the Hornets captain scored the opener from the penalty spot and also made five clearances, blocks and interceptions (CBI) and a pair of recoveries.

Andre Ayew (£7.1m) received two bonus points, with 23 in the BPS, after emerging from the bench to grab the visitors’ equaliser.

The Hammers defender produced 12 CBI and seven recoveries, in addition to completing 90% of 53 attempted passes.

Deeney also topped the ICT Index thanks to a score of 9.3.

He fired two shots on goal, both from inside the penalty box, netting an eighth goal of the campaign.

Fielded up front for the Hammers in the continued absence of Andy Carroll (£6.2m), he registered three shots on goal, all from inside the Watford penalty area, though failed to hit the target with any.

The visitors’ Sofiane Feghouli (£5.0m) topped the Creativity ranks with a tally of 37. The Algerian produced three scoring opportunities and was successful with one of six attempted crosses.

Scoring in four of the last five Gameweeks, Deeney has been drafted in by almost 8,000 FPL managers since Saturday’s deadline.

However, with Walter Mazzarri’s side set to miss Gameweek 28 due to FA Cup postponements, it may not be until Gameweek 29 before he becomes a viable option.

From that point on, six of Watford’s following eight matches score no more than two in the Fixture Difficulty Rankings (FDR).

The Vicarage Road side are likely to be without Mauro Zarate (£5.5m) for the run-in, however, after the Argentinian was taken off on a stretcher with a knee injury.

For the Hammers, Antonio’s late dismissal means that he will miss the Gameweek 27 home encounter against Chelsea, although Andy Carroll (£6.2m) could return for that encounter.

Owned by 11% of FPL managers, the versitile Antonio is second only to Matt Phillips (£5.8m) for sales among midfielders, with 32,000+ parting company.

But he will be available for a Gameweek 28 trip to AFC Bournemouth, with the Hammers one of only eight sides set to take part in that round of fixtures.

Indeed, West Ham are braced for a favourable schedule from Gameweek 28 onwards that could increase interest in their key assets.

Five of their subsequent six matches score two or less in the FDR, with matches against AFC Bournemouth, Leicester City, Hull City, Swansea City and Sunderland.