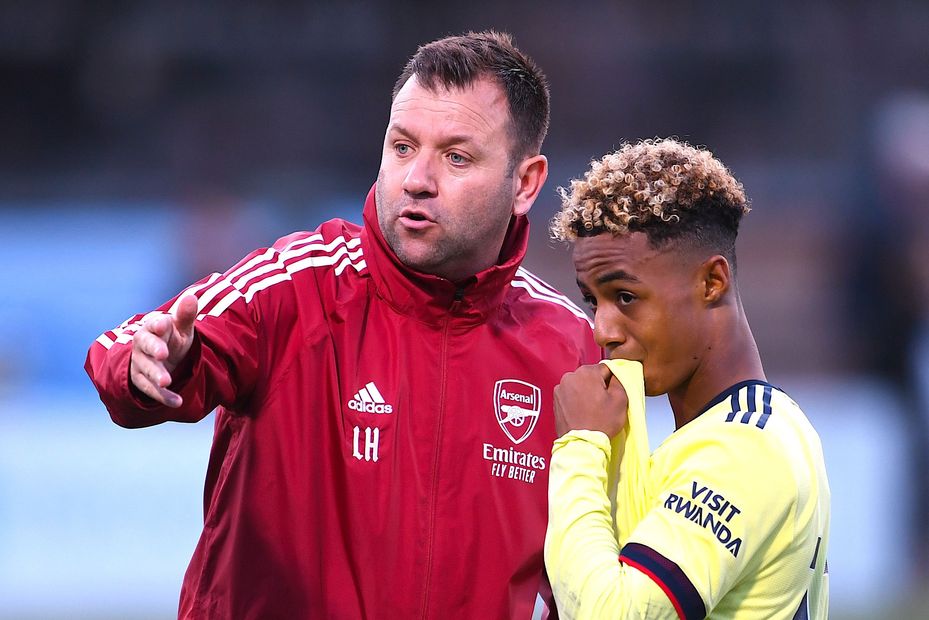 As part of this, we are showcasing in a series of articles, how the Premier League is leading a positive change in the global perception of our coaching at academy and first-team levels, as well as increasing the diversity of the coaching workforce.

One way the Premier League is leading the change is through its Elite Heads of Coaching (EHOC) programme, which seeks to empower all Premier League and EFL clubs to establish a sustainable approach to coach development in academy football.

Earlier this year, Adrian Clarke spoke to Luke Hobbs, the head of academy coaching at Arsenal, who is a member of EHOC to hear about his role and how the Premier League helps him.

Player development will always be the No 1 priority at academy level, but to facilitate this, standards of coaching must never be allowed to stand still. So, who is it that coaches the coaches?

At Arsenal, that responsibility belongs to Hobbs, who oversees the Under-9s right up to the Under-23s, across their hugely successful sites at Hale End and London Colney.

"We need to help the coaches in order to help the players," says Hobbs as he passionately explains the value of being on hand to give them regular support.

"The volume of staff around the players is so big. There's operations, sports science and medicine, player care, analysis, education, talent ID, nutrition, and psychology – and the head coach at each age group manages all of those members of staff, as well as the players and their parents.

"The support that each coach needs, to be a good coach, to be a good people manager and to look after everything else is incredibly important. That's why we are there."

As part of his remit, Hobbs rotates his time working with different age-group coaches. They will often be mic-ed up and filmed in training, as well as on certain matchdays.

"All the head coaches get match day and session feedback throughout the season," he adds. "From my end it's usually a lot of what went well when we sit down with them. It can be so beneficial for a coach to take a step back, reflect, and watch how they get their messages across to the players.

"At Arsenal we also focus heavily on our playing style and trying to be aligned from Under-9s to Under-23s," continues Hobbs, who has worked within their Academy since 2013.

"The support that each coach needs, to be a good coach, to be a good people manager and to look after everything else is incredibly important. That’s why we are there."

"And I'll ask myself, 'How do we train it?' 'What does it look like in a game?' 'Which principles stay the same, or alter as the boys get older?'

"If my eye tells me that in our playing style I am seeing similar things throughout the Academy, that is in line with our playing identity, to me is a gauge of success. I'm not overly obsessed with results."

To help retain that similar way of thinking, his Under-18s head coach, Under-23s and Loans Coach and Under-23s head coach all regularly go to Hale End to share ideas and knowledge with their fellow coaches.

Staff there also pay frequent visits to London Colney, to learn from what is going on. This helps us to create one coaching team over two training grounds.

Last summer, Mark Rivers, who had previously spent 10 years working at the FA, joined him in a role in which he manages Pre-Academy Coaching from the Under-5s to Under-8s.

Rivers is also on the Premier League's Future Coach Developer Pilot Programme with several other high-potential coach developers from across the game.

Inspired by Arsenal Academy boss and former club captain Per Mertesacker, the club's vision is to be the most caring and challenging football academy in the world.

The aim is to produce "strong young Gunners" with three core values at the heart of what they do: discipline, humility and respect.

"In the age groups I cover I am big on those values," says Rivers. "If we are preaching these messages to the coaches, to the players, to the parents and making sure they adhere to them, we have got to do the same.

"Part of my job is to make sure that by respectfully challenging the coaches. We too are living out these values.

"If we don't, they just become lovely phrases that go on mouse mats and mugs!"

Rivers is also keen to point out that his role is not just to assess the work of the coaches, but to have a constant, open and friendly dialogue with them.

"We talk about having a coaching workforce full of radiators rather than hoovers," he adds.

"Radiators warm the place up. As soon as we get into that dome at Hale End it's all smiles and fist bumps. I think having that connector with a coach is key.

"I hear you had this going on in your life, do you want to talk about it? How was your coaching course the other day? Do you want to share ideas?

As part of the EHOC programme, both men are given access to highly experienced mentors, and through courses put on by the Premier League, they are taught how to mentor too.

Great value is also placed on soaking up knowledge from outside sources.

Hobbs, 42, may have worked at Arsenal's Academy alongside Liam Brady, Andries Jonker and now Mertesacker - as well having a spell in interim charge himself - but it his view that gaining expertise from elsewhere is of paramount importance.

"At a big club like this you can sometimes become a little bit insular, but it's indispensable to get advice and learn from what's going on outside the football club.

"This season we’ve had Rio Ferdinand speak to all our coaches for an hour, and we've also had [former West Ham academy director] Tony Carr come in and chat to us too.

"External speakers from a range of different backgrounds are invited in to add value, and very soon David Seaman is joining us to tell us what he learnt from all the brilliant managers he played under which should be fantastic.

"We actively want to look and learn from others. EHOC asked us to go to Fulham recently and we both [Hobbs and Rivers] wanted to be there and it was beneficial.

Inside Arsenal's Academy, there is a holistic approach to making progress, individually and collectively within the coaching ranks.

Sharing honest and constructive dialogue is regarded as essential, and on that topic Rivers is keen to share a story that struck a chord with him earlier on this season after he'd role-modelled part of a session.

"I have a coach who sends me voice notes after every training session and one of the most striking ones was where he asked me what I meant by 'setting traps'.

"He said he felt quite embarrassed that he didn't know the term when I had delivered it, but I told him I was the one who should be embarrassed because I'd assumed he was aware of it.

"There's a subconscious barrier to learning that coaches sometimes fall into, and we don't want that to be the case here. It was a valuable period of open reflection that was very useful for both of us.

"Hopefully, at Arsenal we have created a decision-rich environment where the coaches are able to make decisions for themselves," continues Rivers, who has also worked for Plymouth Argyle, Reading, Wycombe Wanderers, AFC Wimbledon and Farnborough Town.

"There are some non-negotiables in terms of our playing philosophy and core values of course, but with that there has to be room for autonomy, and for you to freely express yourself as a practitioner."

To achieve Mertesacker's blueprint for developing "Strong Young Gunners", the Academy sets out four pillars that underpin their coaching.

Everything they work towards is aimed at developing an "Effective Team Player", a "Lifelong Learner", someone with "Champion Mentality", who is also a "Most Efficient Mover".

Their playing identity is aiming for each individual to master the ball so that all teams can dominate possession.

From Under-9s to Under-23s, every age group has three coaches. It is felt that a small coach-to-player ratio is really important to develop every player as every player matters.

Improving players is the name of the game, but as the conversation develops, it is abundantly clear that there is also a strong will for every coach within Arsenal's Academy to raise their own levels year on year too.

Hobbs puts together regular development action plans for all their head coaches, and everyone at Hale End is actively encouraged to upskill through courses and workshops run by the FA.

Monthly playing style CPD meetings (Continued Professional Development) take place to ensure there is a clear line on how they want their teams to play, and Hobbs will also meet phase leads at least once a month for progress reports.

"In football you talk about individuals-units-team and on the coaching side we do the same," he says.

"In this role I will spend time working with an individual coach, with a cluster unit of coaches within a phase, and then I'll sit down with our team of coaches as a whole.

"Putting together a successful coaching team is very similar to picking a starting eleven as a head coach. I have to select a team where I put the best people in the right positions at the right time. You constantly assess and review that."

Creating pathways is also key to a happy working environment according to Hobbs, who previously worked in youth development at Southend United, Cambridge United and Peterborough United during a coaching career that now spans 24 years.

"We are really proud of the number of coaches who have worked at pre-academy level that have now taken opportunities to work at Hale End, and a number have gone from part-time to full-time positions.

"We’ve seen coaches go from working at Hale End to London Colney, and then gone from working at the academy to joining the FA in important roles. We absolutely celebrate all of that.

"We can't govern anyone's direction or journey. We will sit with an individual coach at the start of the year and ask them what they want to be, where they want to go, and once we establish that we can try and help them.

"Balancing what the coaches want, with what the players need is really important – but we do want our coaches to see that there is a pathway.

"If our coaches are content and believe they are developing with us, then hopefully this will rub off on the players, and they will be happy as well."

Part 1: Academy coaches broaden horizons with comedy
Part 3: Hobbs: Support for coaches is incredibly important
Part 4: Binnion: League helps take me out of my comfort zone as a coach
Part 5: Building connection with players is key to coaching