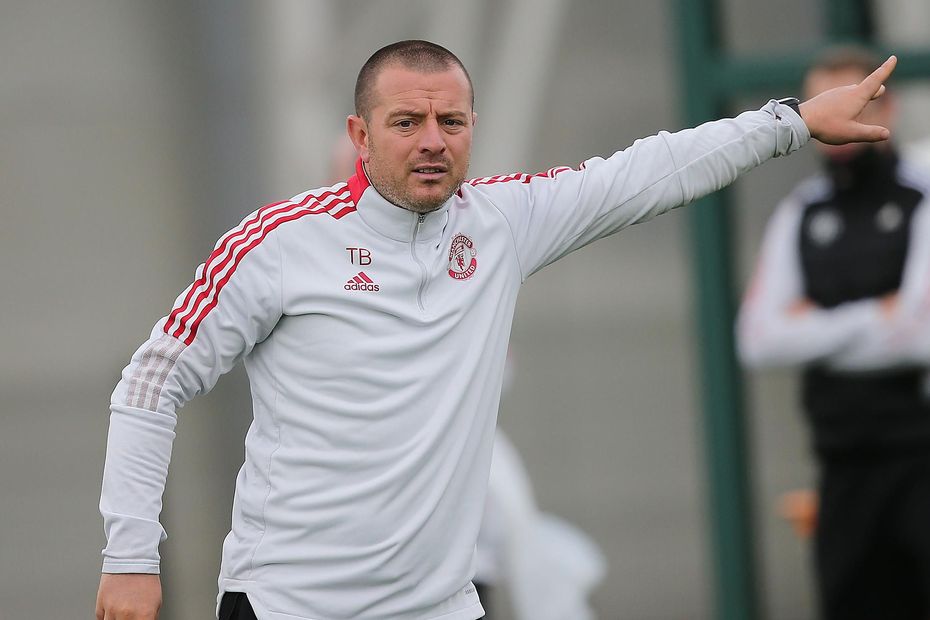 Binnion: 'I knew this club was special' External Link
Academy coaches broaden horizons with comedy
'Heads of Coaching can have lifelong impact on players'

As part of this, we are showcasing in a series of articles, how the Premier League is leading a positive change in the global perception of our coaching at academy and first-team levels, as well as increasing the diversity of the coaching workforce.

One way the Premier League is leading the change is through its Elite Heads of Coaching (EHOC) programme, which seeks to empower all Premier League and EFL clubs to establish a sustainable approach to coach development in academy football.

Earlier this year, Adrian Clarke spoke to Travis Binnion, Manchester United’s Under-18 lead coach, a role he also combines with being Head of Player Development & Coaching, who is currently on the Premier League’s Elite Coach Accreditation Scheme (ECAS).

"The most challenging part of my job is getting players to just worry about themselves and their progress.

"There is so much going on in a teenager's life and so many voices they can listen to - and we must not to let it interfere with their development.

"If we as coaches think we are the biggest and sole influences then we are kidding ourselves. So, to get these young players to be the best they can be, we need joined-up thinking and for all the various stakeholders to be on the same page.

"That means getting parents, friends, agents etc to buy in and understand the role they can play, to help that person achieve their potential.

"This is an environment and culture thing, and it's something we are working hard to create."

Straight-talking and incredibly passionate about improving the gifted young players in his care, Binnion speaks with clarity and is driven to make a difference.

After a hip injury ended his own dreams of becoming a first-team player at boyhood club Sheffield United, Binnion embarked on a coaching career within the Blades Academy at the age of 21.

Taken under his wing by John Pemberton, he was assistant manager of a Sheff Utd Under-18s side featuring Harry Maguire that reached the 2011 FA Youth Cup Final.

"I learned a lot about communicating with people and trying to inspire as Academy manager at Sheffield United," he says. "I picked up a lot of new skills doing that job which was fantastic, but it did dilute my time on the grass working with players.

"I did alright but trying to run and develop the academy, manage all the staff and work on the organisational side, all while still coaching the Under-23s, wasn't easy at the time."

In 2019, Cox brought Binnion across to Man Utd to oversee the U14-U16 player development phase. Last summer, after a reshuffle at Carrington, he became lead coach of the Under-18s.

Could that dual role be beneficial to the players? Binnion thinks so. "Nick Cox's vision is working really well," he says.

"In academies I feel like there can be a lot of issues that crop up across phase lines - and that's the opposite of what is meant to be achieved.

"This is an environment and culture thing, and it’s something we are working hard to create"

"From foundations into 14s, 16s, into the youth team, even youth team to the 23s, you've got different people with differing opinions, a player's development can be stifled or accelerated. That's not always in the player's favour."

"Alignment is a word that is used a lot, but it is so key. The way we work at United reduces issues that can arise when there is a lack of continuity.

"Here I like to get our 14s, 15s and 16s coaches involved in some youth-team sessions and senior staff from the older age groups like Mark Dempsey and Paul McShane will get involved with the younger guys too.

"We have got a real swirl going on and it gives me the ability to make sure the programme is right for the players, that we are giving them the right experiences, and crucially, that we are all making the right decisions.

"We have the benefit of knowing what comes next for them, and that's the beauty of it."

Preparing teenage footballers for the rigours of life in the professional game is very much at the forefront of Binnion's thinking.

The technical, tactical, and athletic aspects of their development are naturally of paramount importance, but so too is their mindset.

"They grow up in a bubble, training and playing through the age groups, but down the line it is the best game in the world, that is also a ruthless industry," he says.

"They have got to know what is going to be required of them and you can't just shock them at the point when it happens. You need to build them up to it.

"That means the work ethic in training, the standards of behaviour around the building have to be right.

"It's important young players don't think they can just do their bit on the football pitch and then do what they want in the gym, in school or wherever else they are.

"You are trying to build a robust individual who's aware of their surroundings, who thrives as a person on and off the pitch.

"My view is players should only fail if they are not good enough, not because they weren't able to adjust.

"If we get that side of it right, with the quality of players we have at Man Utd, then we will succeed as an academy, and most importantly the kids will also go on and achieve."

In 2021, Binnion was offered a place on the Premier League's Elite Coach Apprenticeship Scheme (ECAS).

It is a two-year development programme aimed at accelerating the learning of coaches employed by clubs, who demonstrate the potential to be future elite coaches in youth football.

Encouraged by Man Utd to enrol in the scheme, the experience is proving beneficial to Binnion.

"I feel like I have been on a hamster wheel for 14 or 15 years. It's worked for me, and I just love coaching players and helping them.

"That's what gets me excited, but sometimes you need to step out of your day-to-day working environment to develop other skillsets.

"Even just taking the time to reflect on what you are, or what you aren't is invaluable."

Along with other selected coaches from around the country, he recently spent two days at Birmingham University learning communication and relationship-building skills, that included a talk from hostage situation specialists.

There was also an ad-lib session at a comedy club, designed to help the coaches work on reacting to impromptu situations, particularly on the media side.

"I want to upskill and stretch myself, and ECAS does that. It takes you out of your comfort zone at times and that's good.

"Technically and tactically you have to be spot-on, and for a coach at this level, I see that as a given.

"However, that connection with people, whether it is your seniors, the first-team staff, a parent, an agent a player; you will live or die on those relationships and conversations.

"At ECAS when they give you the theory behind it all and the underpinning knowledge, it is awakening. It gives you clarity on some of the things that have happened in the past."

In December 2019, Man Utd proudly celebrated the 4,000th consecutive fixture that contained at least one Academy graduate in the matchday squad, a run that is still ongoing.

Marcus Rashford, Jesse Lingard, Paul Pogba, Scott McTominay, Anthony Elanga and Dean Henderson are currently flying the flag for an academy that has developed a stream of outstanding players down the years.

Handed the responsibility to guide and nurture the next generation of talent, Binnion is excited at what the future holds.

"Just look at the number of players who have had careers, who came through at United, it is second to none.

"Continuing that success and developing it even further is a passion of mine, and a passion of the staff together. We want to be regarded as the best developers of players in this country and in Europe.

"At our place there is something more powerful than anything that can be said, and that is the photos hanging up of all the top players we have produced down the years. Maintaining that tradition is essential."

Before we wrap our conversation, Binnion is asked two more questions.

What has he learned most from his coaching experiences so far? And what gives him the biggest buzz?

"I have learned that if you truly care about every person or player that is in your care, you always have to be authentic with them."

"Care and authenticity mean you will mess up less. If you are being you, to the best of your ability, at that point to help the group of players or staff that you are with, and you get it wrong - you have got it wrong for the right reasons.

"For the wider industry and developers it’s about seeing players have long and successful careers in the game, and beyond football"

"That's when you can reflect and improve on it.

"As for the bits that make you feel best; while it is nice to play lovely football and win matches – those moments are only great for the players and staff involved.

"For the wider industry and developers it's about seeing players have long and successful careers in the game, and beyond football.

"Seeing kids you work with go on to the next level and shine, that's what provides me with the biggest buzz and the most satisfaction.