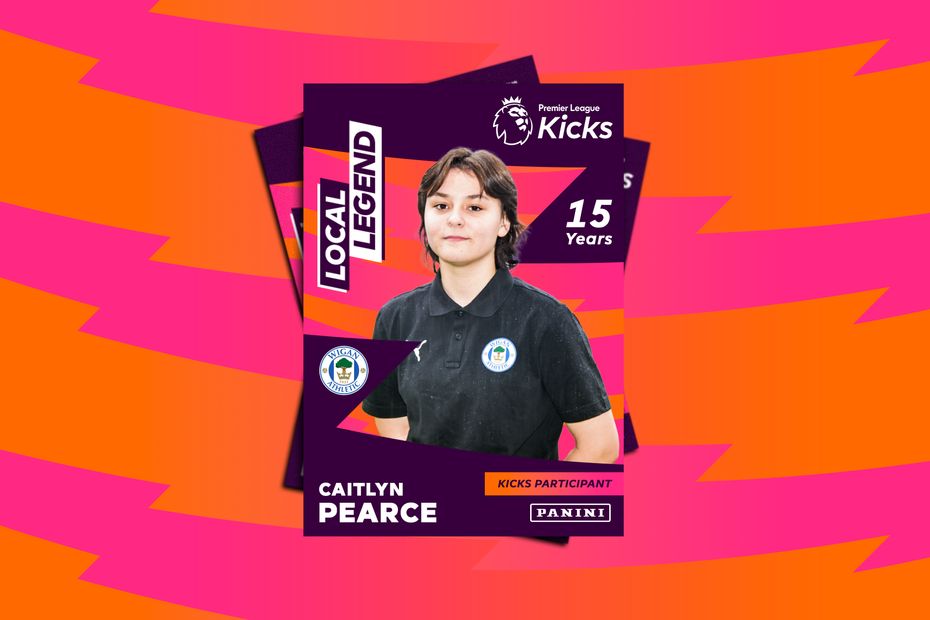 Thanks to PL Kicks in Wigan, 16-year-old's self-belief has transformed and she's a mentor for other participants

For nearly 15 years, the Wigan Athletic Community Trust have been at the heart of their town, supporting and mentoring young people in the local area through Premier League Kicks.

"We operate in some of the most deprived areas of the town and sometimes there's not a lot going on but the local community know that our staff will be there and that makes a huge difference to the young people."

One participant helped by Wigan's PL Kicks programme is 16-year-old Caitlyn. She joined in 2019 to play football with others and to gain confidence during a time when she was having difficulties at home.

"I was very shy," she says. "I didn't want to talk to anyone. I'd just sit on the side and watch everyone else. The first few times I cried because I was that nervous."

Taking part in a girls-only session, Caitlyn soon found her feet and made friends, boosting her self-belief.

Such is her confidence that Caitlyn is now a mentor for other Premier League Kicks participants and is also part of Youth Voices sessions, which provides a forum for young people to speak about and address issues important to them.

"It started off as one session, then two and three, and now it's got me to a point where I'm in education with them, which is going to give me a career," she says. "Now, I turn up to PL Kicks and talk to anyone and everyone.

"Kicks can definitely have a bigger impact than just playing football, like on your mental health, your physical health, building a stronger and safer community. It brings everyone together."

To mark her journey over the last three years, Caitlyn has been named as Wigan's "Premier League Kicks Local Legend" as part of the programme's 15th anniversary celebrations.

"I am very proud of myself," she says. "Considering I'm like someone small at the very beginning now getting into bigger places."

Such is the success of the League One club's PL Kicks programme that there are now 15 sessions a week, with more than 1,000 participants a year.

"Caitlyn is just one example of a young person who we've been able to give an opportunity to," Tom says.

"The badge of Wigan Athletic and the Premier League helps attract young people to the sessions and it gives them a chance to develop relationships with staff who become the youth workers with them and talk to them about issues facing their lives.

"The fact that we've been able to rely on that funding for almost 15 years is just incredible. It enables us to address local priorities, which is hugely important to a town like Wigan."