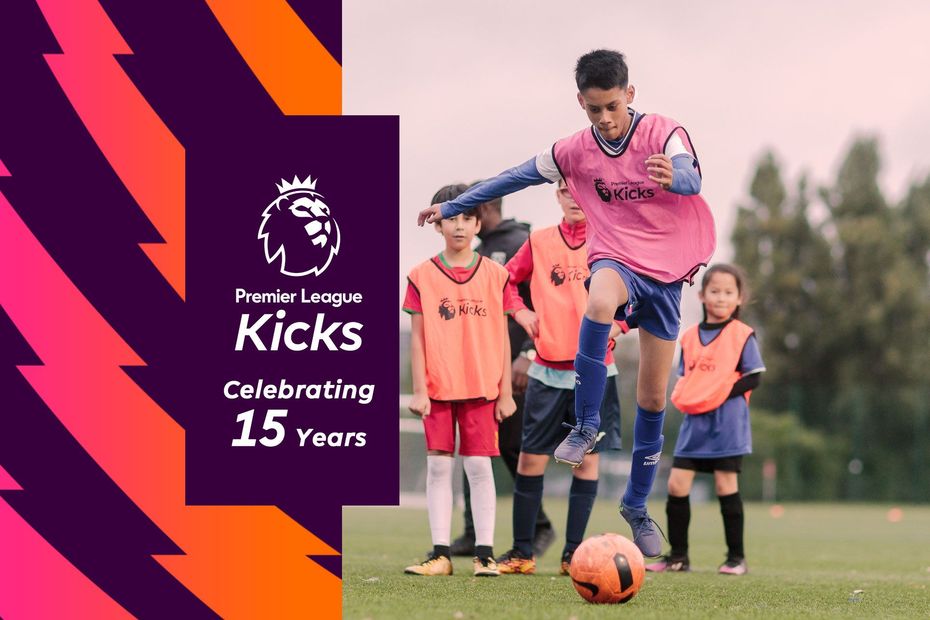 Premier League Kicks has supported hundreds of thousands of young people to achieve their potential and improve their wellbeing through free weekly football sessions and educational workshops.

Kicks began in the 2006/07 season in partnership with the Metropolitan Police, with the aim of involving and supporting young people in regular, positive and fun activity while helping to create stronger, safer and more inclusive communities.

To date, the Premier League has invested almost £66million in Kicks and in the year ahead an estimated 80,000 young people will take part in the programme.

Since it began, more than 440,000 young people have participated in Premier League Kicks football and multi-sport sessions held at community venues across England and Wales.

The programme started with four pilot clubs and is now run across 936 venues by 90 Premier League, English Football League and National League sides – all funded by the Premier League.

As part of the 15-year celebrations, clubs have nominated a Premier League Kicks 'Local Legend' - somebody who has taken part in, volunteered or worked on the programme and has inspired others through their dedication, work ethic and own personal development.

Each nominee will receive a bespoke ‘Local Legend’ football card, which has been created with support from Premier League partner Panini.

Former Manchester United defender Rio Ferdinand, who won six Premier League titles, has shared his support for the scheme and features alongside Kicks participants and coaches in a video celebrating 15 years of the programme's impact.

"For 15 years Premier League Kicks has been using the universal language of football to bring communities together and inspire a new generation of young people, providing positive role models who can give them belief and can help to steer them on the right path in life," Ferdinand said.

"Legend is a word you hear a lot in football, but legends aren't just created in stadiums. The coaches, mentors, volunteers and participants who have fulfilled their potential thanks to these weekly sessions all deserve to be called legends."

"We are proud of the incredible impact Kicks has had on communities up and down the country over the past 15 years," said Premier League Chief Executive Richard Masters.

"As we mark the anniversary, this is an opportunity to celebrate the local legends who have helped make Premier League Kicks what it is.

"The success of the programme would not have been possible without the hard work and passion of club staff, coaches and volunteers working alongside young people at Kicks sessions, week in, week out."

As well as providing young people with access to free football and sports activities, Premier League Kicks offers mentoring, life skills advice and access to opportunities like volunteering to help aid their development.

Former participant Najma Shariffu, who is West Ham United's Premier League Kicks Local Legend, said: "When I first started at Kicks, I was extremely shy and struggled a little bit with anxiety. Through the sessions I've been able to overcome those things and have become more confident, thanks to help from the coaches.

"They've supported my personal and professional development, from gaining my qualifications, to getting a full-time job and now being the PL Kicks lead at West Ham United Foundation."

Clubs also run workshops on a variety of social issues, enabling young people to openly discuss topics that affect them, like equality, diversity and inclusion and combatting youth violence and knife crime.

"The work of the Premier League Kicks programme has been imperative to the success of curbing youth violence," said Detective Inspector Madeline Kelly, Greater Manchester Police.

"We try and steer young people away who are on the periphery of youth gang activity and the Kicks programme has been intrinsic in that success. Kicks has helped to break down barriers between the police uniform and young people which is really important in the community."

The League funds Premier League Kicks and other community programmes through its £100m investment per season in community facilities and community and education programmes.

As part of the PL Kicks anniversary celebrations, representative teams from all 90 Premier League Kicks clubs have been invited to attend one of six regional tournaments during the February half-term (14-25 February 2022), bringing together more than 1,000 young people.