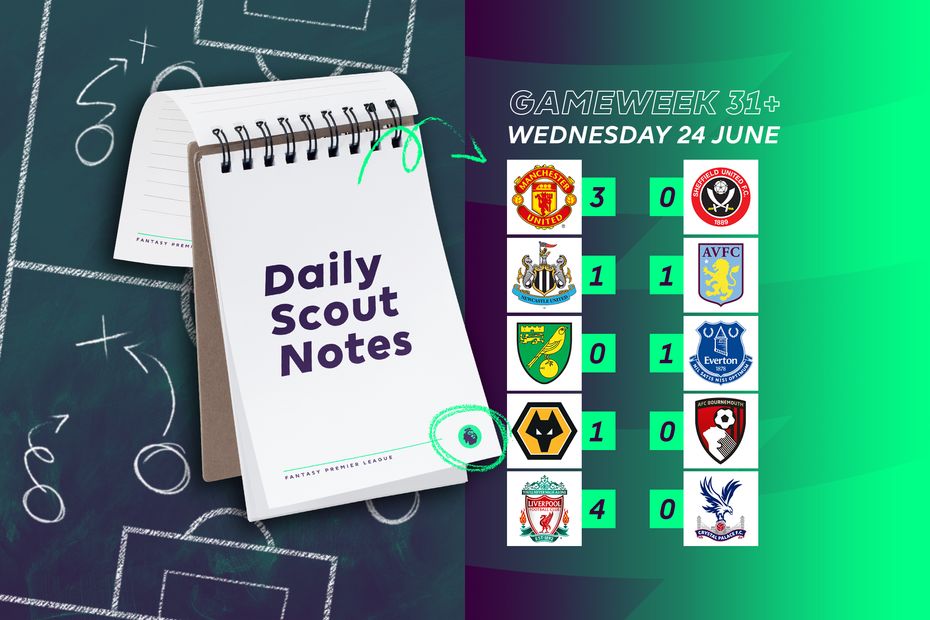 A triple-up on Manchester United’s attack looks an increasingly tempting tactic for FPL managers after the hat-trick by Anthony Martial (£8.0m) against Sheffield United.

The Frenchman had largely been ignored ahead of Tuesday’s deadline, earning just 51,000 new owners.

But both were overshadowed by Martial, who posted his season-high haul of 21 points.

While Rashford rewarded his owners with two assists, Fernandes suffered a rare blank, his first in six outings.

A very favourable upcoming schedule strengthens the appeal of bringing in the Red Devils’ trio over the run-in.

According to the Fixture Difficulty Ratings (FDR), each of their next three matches, against Brighton & Hove Albion, AFC Bournemouth and Aston Villa, score just two.

At the back, Aaron Wan Bissaka (£5.3m) is the form pick in a defence that have kept five clean sheets in the last seven Gameweeks. The right-back has two assists in six appearances.

For the Blades, Dean Henderson (£5.2m) and John Egan (£4.5m) both missed out but will be available to face Tottenham Hotspur in Gameweek 32+.

On-loan Henderson was unable to face his parent club, while Egan was suspended.

The early withdrawal of Matt Ritchie (£5.3m) against Aston Villa helped him enjoy further success as a differential.

Ritchie, who is listed as a defender in FPL but plays in midfield, kept his clean sheet as he was replaced after 66 minutes with the scoreline goalless.

The Newcastle United man has now produced a goal, an assist and six clean sheets in his last seven starts for his 0.9 per cent ownership.

But his owners will be waiting for an injury update after Ritchie was forced off with a knock in the 1-1 draw.

Ritchie’s short-term schedule warrants consideration if he is passed fit.

According to the Fixture Difficulty Ratings (FDR), Newcastle’s next two matches, against AFC Bournemouth and West Ham United, each score two.

Federico Fernandez (£4.6m) and Jamaal Lascelles (£4.3m) are the cheaper alternatives in a defence with three clean sheets in four matches.

For Villa, Jack Grealish (£6.3m) is the most-sold midfielder in the Gameweek after his fifth straight blank.

Over 53,000 have moved him out ahead of a tough schedule, with four of Villa’s next five matches scoring four or more in the FDR.

Grealish owners should consider moving to Ismaila Sarr (£6.3m), who has three home matches in four Gameweeks for Watford.

Everton’s defenders were the main source of points against Norwich City as the Toffees recorded their eighth clean sheet of the season.

The fixtures remain in Everton’s favour. Six of their final seven matches score no more than three, according to the Fixture Difficulty Ratings (FDR).

But with Yerry Mina (£5.3m) set to be available at the weekend, manager Carlo Ancelotti will have to decide which of his three centre-backs to leave out.

The Frenchman, who takes set-pieces, supplied his sixth assist of the campaign against the Canaries.

Meanwhile, there was disappointment for the 220,000+ who transferred in Richarlison (£8.3m) or Dominic Calvert-Lewin (£6.5m) as they both blanked.

For Norwich, owners of Teemu Pukki (£6.5m) and Todd Cantwell (£4.7m) may have to reconsider their options ahead of the Gameweek 32+ meeting with Arsenal.

Both were left out of the starting XI by Daniel Farke, with Pukki featuring as a substitute for the first time this season.

Raul Jimenez (£8.3m) justified his place as the most-bought player for Gameweek 31+ by scoring the decisive goal at home against AFC Bournemouth.

The Wolverhampton Wanderers frontman also rewarded his 284,000+ new owners by claiming the maximum bonus for a nine-point total.

Jimenez will be among the favoured Gameweek 32+ captain picks against Aston Villa, having scored in four of his last five appearances.

Adama Traore (£5.8m) provided an assist for Jimenez for the second successive match.

After making an impact from the bench last time out, Traore was handed a place in the starting XI as Wolves switched from 3-5-2 to a 3-4-3 formation.

Tight at the back

At the back, Nuno Espirito Santo's side picked up their sixth clean sheet in seven outings.

And they have the schedule to extend that run, with each of their next six matches scoring no more than three in the Fixture Difficulty Ratings (FDR).

But owners of Romain Saiss (£4.6m) will be concerned after he received his ninth booking of the season.

If he earns a yellow card against Villa, Saiss would be suspended for Gameweeks 33+ and 34+.

For the Cherries, Dominic Solanke (£5.1m) could be pushing for a start at home against Newcastle United. His fellow forward Callum Wilson (£7.4m) is suspended for two matches.

A goal and an assist against Crystal Palace took Mohamed Salah (£12.7m) back to the top of the FPL player standings.

Liverpool's Egyptian was the most-selected captain for Gameweek 31+, handed the armband by more than 1.3m managers.

And Salah repaid their faith with his eighth double-figure haul of the season, delivering 22 points with the captain's armband.

Left-back Robertson supplied his eighth assist of 2019/20 but still fell further behind Trent Alexander-Arnold (£7.8m) in the FPL defender standings.

Having opened the scoring from a direct free-kick, Alexander-Arnold has moved onto 187 FPL points for the season.

That total leaves him joint-third in the overall FPL rankings, level with team-mate Sadio Mane (£12.5m), who scored the fourth goal.

A visit to Manchester City in Gameweek 32+ limits the appeal of captaining Liverpool players, but Klopp’s teamsheet against Palace showed rotation is very unlikely while the Reds are still pushing for the title.

The Eagles will be hoping their talisman Wilfried Zaha (£6.7m) recovers from the first-half injury he picked up at Anfield in time for their home match against Burnley.

Max Meyer (£5.2m) replaced the Ivorian early in the first half and will be pushing for a start on Monday evening.