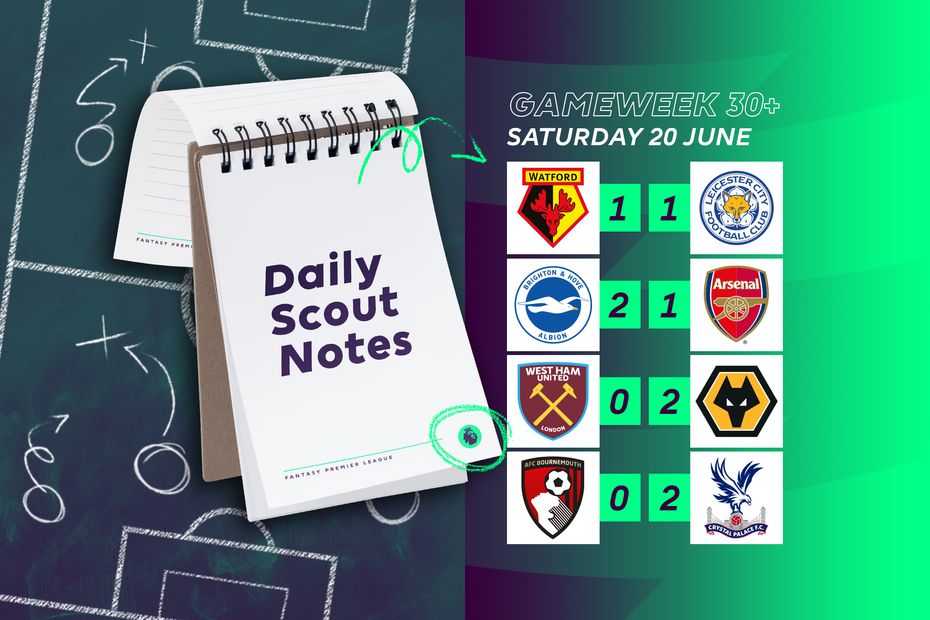 All four of Watford's starting defenders earned points against the Foxes.

Full-backs Kiko Femenia (£4.2m) and Adam Masina (£4.3m) collected clean sheets in the 1-1 draw as they were both replaced just before 80 minutes with the score still goalless.

Kabasele's impact at both ends of the pitch has been a big factor in home matches under Nigel Pearson.

The Belgian has two assists and four clean sheets in his last seven appearances at Vicarage Road.

That could mark him out as a standout value pick for a fine run of home opponents for the Hornets.

They entertain Southampton, Norwich City and Newcastle United in the next five Gameweeks.

The sixth top armband pick for Gameweek 30+, Leicester City's striker has now blanked in seven of his last nine appearances.

Instead it was Ben Chilwell (£5.5m) who scored for the visitors, claiming maximum three bonus to earn a match-high 11 points.

Right-back James Justin (£4.7m) offers a cut-price route into the Leicester defence and looks set to deputise for the injured Ricardo Pereira (£6.3m) over the run-in.

Having featured as a substitute against Manchester City, Pepe returned to the starting XI and scored the opener at Brighton & Hove Albion.

That helped him to eight points for Gameweek 30+, more than any team-mate.

Saka has recently moved into a more advanced role ahead of matches against Southampton and Norwich City.

However, Double Gameweek 30+ was one to forget for Pierre-Emerick Aubameyang (£11.1m).

He was handed the captaincy by 724,000 but blanked in both matches.

At the back, Emiliano Martinez (£4.2m) could be the cheapest starting goalkeeper in FPL if Gunners' No 1 Bernd Leno (£5.0m) is sidelined with the injury that forced him off early on.

However, their upcoming schedule does little to encourage investment. Brighton face four of the top five teams in the Premier League in the next five Gameweeks.

Wolverhampton Wanders continue to richly reward FPL managers at both ends of the pitch.

Doherty supplied an assist and also helped Wolves to a fifth clean sheet in six.

The Irishman's four goals and six assists have earned him over 19,000 transfers in this Gameweek, more than any other defender.

Doherty looks the leading option in the Wolves defence for a very favourable upcoming schedule.

Each of their next seven matches score no more than three in the Fixture Difficulty Ratings (FDR).

Frontman Jimenez was the third-most sold player heading into Gameweek 30+, moved on by over 403,000 managers.

But the Mexican's sixth goal in eight matches punished those sellers, underlining his form for that promising run of opponents.

Adama Traore (£5.7m) will be pushing for a start against AFC Bournemouth in midweek after emerging from the bench to assist Jimenez's opener.

For the Hammers, Michail Antonio's (£6.9m) role up front means he could provide FPL managers with an "out of position" option when their fixtures improve from Gameweek 33+ onwards.

The left-back supplied an assist in the 2-0 win while also helping Crystal Palace to a fourth successive clean sheet.

Sitting in only 5.4 per cent of squads, Van Aanholt has been overlooked by FPL managers due to the value offered by fellow defenders Gary Cahill (£4.4m), Joel Ward (£4.3m) and Scott Dann (£4.3m).

Yet the Dutchman has merited the extra outlay recently, producing 41 points over the last four Gameweeks.

Palace's tough upcoming schedule suggests Van Aanholt may have to mainly rely on his attacking output for the run-in.

Six of the Eagles' remaining eight matches are against opponents in the top half of the table.

While such a schedule could also limit the prospects of Jordan Ayew (£5.2m), his form could still be useful for managers needing a cut-price forward to help facilitate a 3-5-2 formation.

The Ghanaian netted Palace's second and has delivered attacking returns in each of his last four matches.

For AFC Bournemouth, David Brooks (£6.2m) could emerge as differential in midfield. The Welshman made his first appearance of the season after a long-term injury.