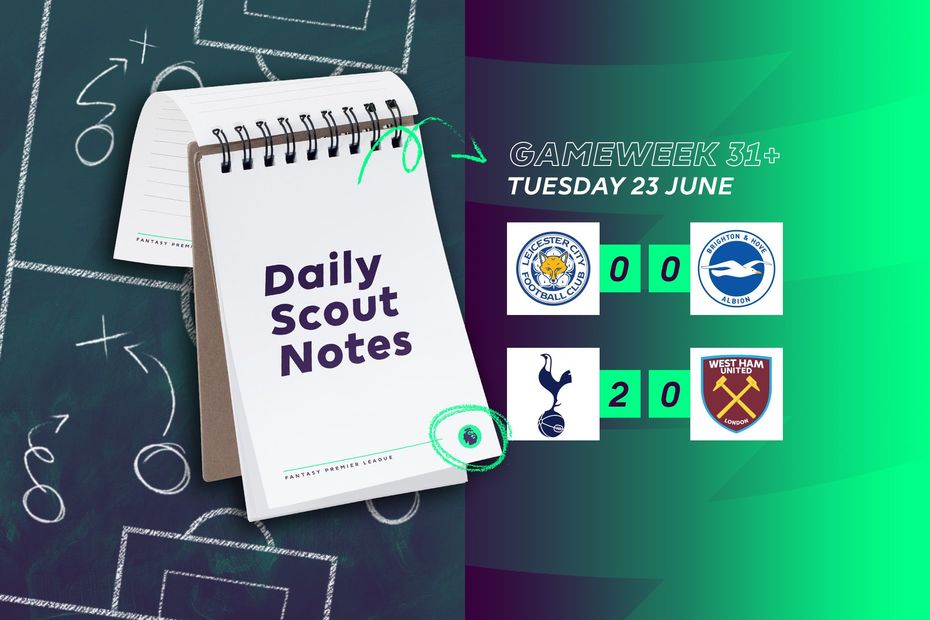 The Scout reviews every Fantasy Premier League fixture, whether it's noting player rotation and injuries, making astute tactical observations or highlighting in-form differentials, until the end of the season.

Kasper Schmeichel (£5.4m) is now the top-scoring goalkeeper in FPL after making his second penalty save of the season.

The Dane edged one point ahead of Dean Henderson (£5.2m) after helping Leicester City to their eleventh clean sheet of 2019/20.

Leicester's defence could now warrant investment ahead of an appealing run of matches.

The Foxes face Crystal Palace, AFC Bournemouth and Sheffield United over the next five Gameweeks, all of whom are among the six lowest-scoring teams this season.

In attack, however, owners of Jamie Vardy (£9.8m) and Harvey Barnes (£6.2m) may be looking for replacements.

Vardy blanked for the seventh time in eight Gameweek appearances, while Barnes dropped to the bench as Brendan Rodgers rotated his wingers against Brighton & Hove Albion.

The Seagulls' upcoming opponents deters any investment, with Manchester United, Liverpool and Manchester City in their next four.

Nonetheless, Tariq Lamptey (£4.0m) and Aaron Connolly (£4.2m) both started against Leicester and could appeal as cut-price squad options in defence and up front respectively.

The Tottenham Hotspur trio were among the 12 most-bought players for Gameweek 31+, each transferred in by more than 100,000 managers.

Meanwhile, Kane's effort took his tally to five goals and an assist in his last eight Gameweek appearances.

The 2-0 win also highlighted Aurier's prospects at both ends of the pitch.

The Ivorian has one goal, five assists and four clean sheets in his 19 outings for Mourinho.

An ownership of just 6.0 per cent of managers pinpoints Aurier as a big differential.

Spurs' schedule suggests FPL managers can keep profiting from their key players in defence and attack.

Each of their remaining seven matches scores no more than three in the Fixture Difficulty Ratings (FDR).

For the Hammers, Michail Antonio (£6.9m) continued in the centre-forward role.

Listed as a midfielder in FPL, he could profit when the fixtures turn in their favour from Gameweek 33+.