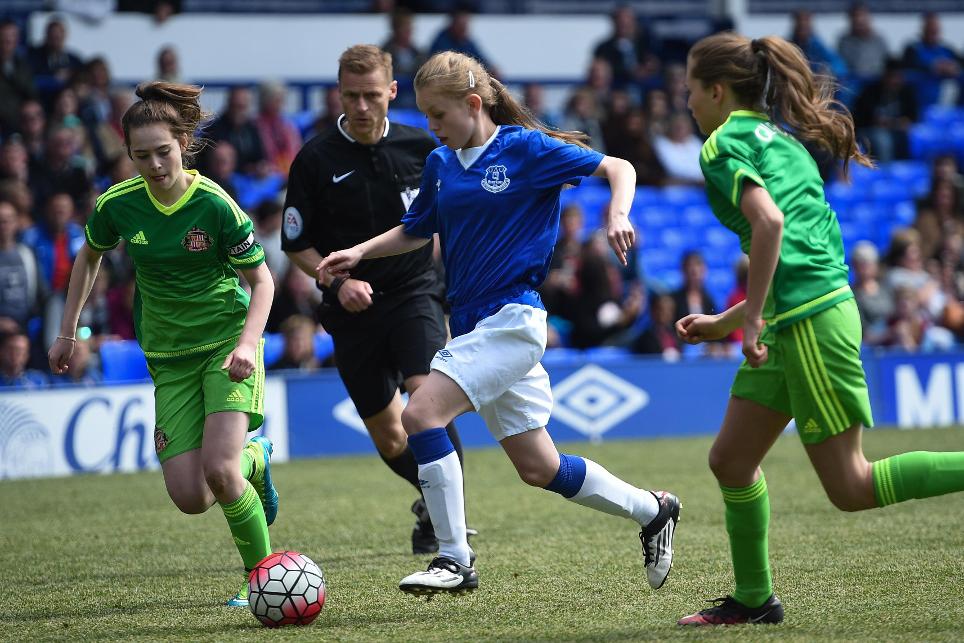 Leighton Baines and Jonjoe Kenny met the players and presented trophies as 40 schools and more than 300 young people, representing the 20 Premier League clubs, competed for the Schools Tournament trophy at Everton's Goodison Park.

Baines has been part of this year's event from the start, meeting Everton's representatives at the draw for tournament in March.

The 31-year-old, who hails from Kirkby nearby, knows the impact that playing at a venue like Goodison Park can have on schoolkids.

"When I was younger I was in county sides and a final was at Goodison Park," he told premierleague.com. "I never got there but it was always something that, as a kid, you were talking about and looking forward to.

"When you see the young players, nostalgia creeps in. You remember what it was like on a hot, sunny day playing in a tournament. You would be out on your feet all day playing and it was the time of your life.

"It's a great incentive to play here. These youngsters will go to the stadiums to support their teams and be in awe of the guys they are watching but to be able to come out on the pitch itself, see how big it is, the stands, hopefully it is inspiring for them and something for them to aspire to.

"It's a great experience for everyone involved."

Last week's Premier League Schools Tournament gave kids the chance to experience life as a top-flight footballer, with teams wearing their club's kit and playing matches refereed by Premier League officials, while many of the players arrived at Goodison Park in coaches used by the first team.

"As a kid, playing in these events, there's nothing better," said Kenny, 19, a defender who has come through the ranks at Everton to make his Barclays Premier League debut in the final match of 2015/16.

"It gives them a taster of what can happen and will give them confidence. You can see all the kids enjoying their time and they are buzzing to be on the pitch."

The tournament also gives a high-profile platform for girls to show the strength of the female game with an Under-13s girls and an Under-11 mixed competition.

Baines and Kenny watched Everton's Under-13 girls representatives Greenbank High took on Sunderland's St. Bedes Comprehensive in the final and were impressed.

"Girls football is growing all the time," Baines said. "There's more enthusiasm for it, for ladies to participate and people's appetite to watch it.

"It’s being given more of an opportunity and it's great to see them starting playing football so young."

The tournament is one of many community programmes run by the Premier League and its clubs throughout the year, all having an impact on thousands of lives around the country.

"It's vital to support these events," Baines said. "You can have such an influence on some of the younger people in the community and it's always a great feeling when you can be involved in something that either helps somebody or brings a smile to somebody’s face.

"It's one of the biggest pleasures of being a footballer."