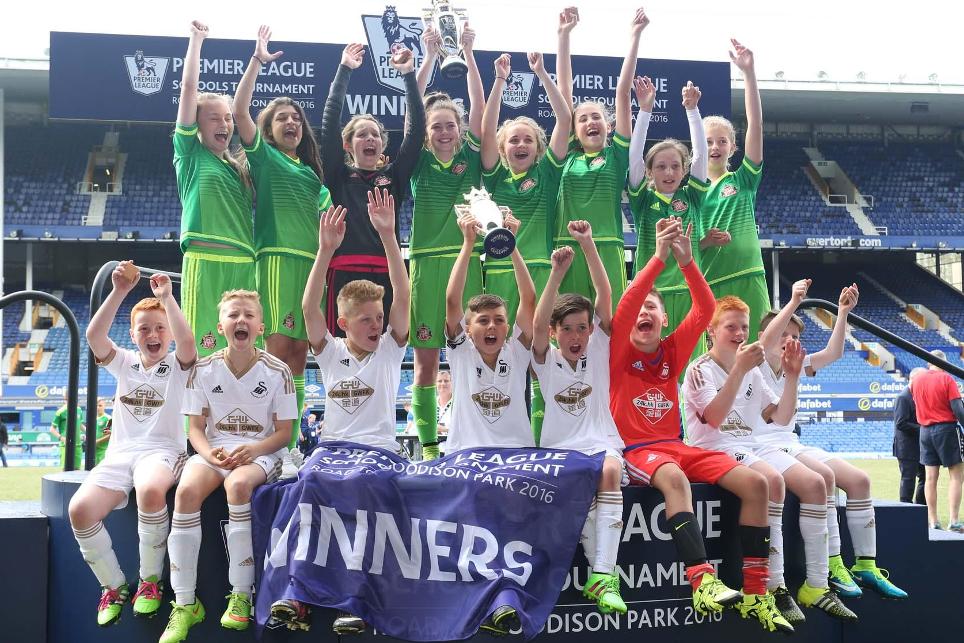 Two new clubs have been added to the Premier League Schools Tournament roll of honour after schools representing Sunderland and Swansea City claimed victory in this year's event at Goodison Park.

St. Bedes Comprehensive in Peterlee claimed victory for the Black Cats in the Under-13s girls tournament courtesy of a 1-0 win over hosts Everton. The triumph marked the end of a dominant performance for St Bedes, who lost only once in the group stages and reached the final with a win over rivals Newcastle United.

"I have really seen the players grow. Over this tournament they have improved and have worked as a team, rather than having the odd player that stands out. You have to be a team to win something like this.

"This kind of tournament inspires them and gives them the belief that they can succeed. I didn't think we would get to the final but we believed in ourselves and dug in and it proves that you can succeed if you try. That's life skills, not just football."

In the Under-11 mixed event, Ysgol Gynradd Gymraeg (YGG) Castell Nedd's side, unbeaten in the whole tournament, won the title for Swansea City with Joel Colwill sealing a 1-0 victory over Crystal Palace's representatives Hayes Primary.

"We were nervous for the final but everyone got over that and did what they had to do," said YGG Castell Nedd defender Morgan Thomas. "Not many get chosen to do this kind of stuff.

"Not many people have a chance to play on this pitch. You have to earn the right to do so. It was very good to be Swansea's representative. Lots of schools entered but we came through qualifying to be here, it's unbelievable. I will never forget this."

The trophy win was a sweet moment for the YGG Castell Nedd team, who just missed out on being Swansea City's representative at last year's Schools Tournament at Tottenham Hotspur's White Hart Lane.

It is not the only victory the team have enjoyed this year, with the players winning the Welsh Rugby Union Primary Schools Final at the Principality Stadium in April.

"I was aware that we had the nucleus of a very good team and I was hopeful that we would qualify for Goodison Park," said YGG Castell Nedd head teacher Tudur Jones. "We missed out at the finals stages last year which was agonising and the boys were particularly determined to go one step further this time.

"It has been an amazing experience for the boys and for their families. The families have really appreciated the opportunity for the boys to showcase their talents on such a big stage. It's been fantastic from start to finish."

The 11th Premier League Schools Tournament has been the biggest ever, with more than 14,000 players and 1,700 schools taking part in qualifying events run by the 20 Premier League clubs.

The 40 winning teams from those qualifiers were given the honour of representing their clubs at Goodison Park and by doing so, enjoyed the full Premier League experience.

Many of the teams travelled to Merseyside in coaches used by the first team and at the stadium, they wore their club's kit, came out of the tunnel to the Premier League anthem and played on the same pitch at their heroes in matches officiated by Premier League referees.

There were also plenty of special guests in attendance, with CBBC presenters Lauren Layfield and Mark Wright filming the event for Match of the Day Kickabout while Everton players Leighton Baines and Jonjoe Kenny and Premier League Executive Chairman Richard Scudamore presented the trophies.

"Sport is a fantastic thing for young people to get involved in," Scudamore said. "It builds confidence, it gives them opportunity, it's competitive and it also gives them the chance to represent their club in their club colours, on a Premier League pitch here at Everton. It's a great experience for them.

"Events like this work because they capture the imagination. People want to get involved and it's fun. It is an experience that will live with them for ever. It's a great event. It gets ever noisier and the quality of the football raises every year."