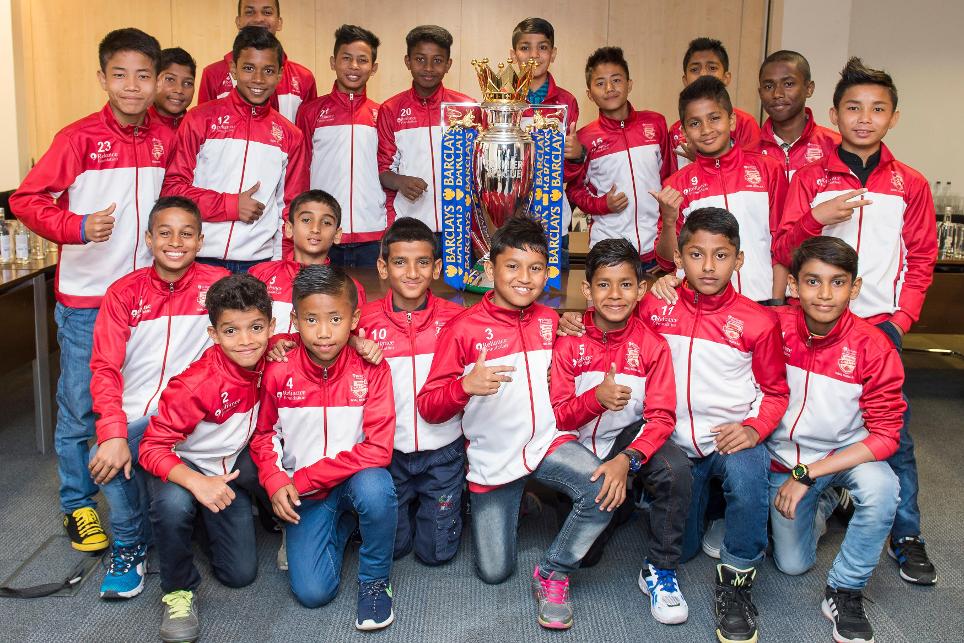 While cricket has long been the dominant sport in India, the popularity of football is growing rapidly.

The country will host the FIFA Under-17 World Cup next year and even if global domination is a distant dream for Subhajit Belel and his team-mates at the Reliance Foundation Young Champs, the co-operation between the Premier League and its clubs and the Indian Super League (ISL) is helping to ensure that the growing popularity of football is founded upon the development of the game at a young age.

In a developing country with a population of 1.3 billion, where the emerging ISL boasts the fourth-best average attendances in the world, the Premier League can extend its global reach by sharing the best coaching methods while winning hearts and minds of potential long-distance supporters.

Belel, 12, was among 21 young Indian players from the Reliance Foundation Young Champs Programme who were selected to visit England as part of the mutual co-operation agreement between the Premier League and ISL signed two years ago.

They visited eight clubs as part of a 12-day tour, enjoying coaching from the clubs they visited, playing matches against the Premier League academy counterparts, looking round the stadiums and participating in community days.

"I enjoyed the Chelsea training the most because the ground was very good," Belel said. "The training was high intensity and I gave my 100%."

The visit to the United Kingdom also included a session at the Premier League offices in London, where they saw the trophy Leicester City won in May, met Executive Chairman Richard Scudamore and learnt from the League's Youth Department about player education and broader development at clubs.

It was not all work, though, as the Young Champs also enjoyed an open top bus tour of London, organised by VisitBritain.

Each club they visited brought a new learning experience.

Their visit to West Brom was special because they learnt about the work the club do in their local area through Albion Foundation, trying out blind football and powerchair football, which are run by the Foundation.

"The partnership between the Indian Super League and the Premier League will be mutually beneficial," Rob Lake, director of the Albion Foundation, said. "For the ISL, it's an opportunity for the League to share good practice and knowledge.

"We've got hundreds of years of experience of footballing culture; football is new to Indians and they want to learn from the biggest and best in the world so that will be the advantage for them.

"The games are watched live, kids are wearing the shirts, and it's important our club and other clubs in the Premier League are giving something back to help them to develop their league so they can rival the PL in the future."

Through the Albion Foundation, West Brom have been one of the most active clubs in developing the game in India.

The Foundation has a partnership with the Delhi Dynamos, the Delhi State government, the University of Wolverhampton and Youth Football International, as part of its "Pass It Forward" programme.

West Brom defender Jonas Olsson flew out last month to see the programme in action, which is being extended to work with more than a thousand schools.

"I want to get out on the streets and in the slums and spend time with children who have a real passion for football," Olsson said before the visit.

Dave Lawrence, football development manager of the Albion Foundation, recently returned from New Delhi where he says PL clubs should look to leave a lasting legacy within a coaching structure.

"The focus on the recent trip was more to do with coaching the coaches, so we spent about 12 hours of that week working with coaches from Delhi Dynamos and Youth Football International," Lawrence said.

"We want to make sure it's not just a case of the Albion Foundation being involved for a week then stepping away, but how we can engage with more coaches to make sure they continue their involvement.

"The facilities in New Delhi are very different to what we can see across West Brom now. I'm very fortunate to have a dual role within the academy and we've got a 4G pitch outside, a brilliant Dome area, sports-hall facilities.

"The areas we use in India are very different: grass is rare and the bobbly surfaces make it very difficult to control and move the ball as well as on surfaces over here. But there are enough facilities to be able to develop a good sports programme.

"What I've found is how coachable the Indian youngsters are. Although English can be a barrier, they listen intently. They understand the game quite well.

"As much as they can, they try and watch the game, even though access to TVs might not be easy.

"Talent is not quite on a par with what we're working with here in Albion - but that's not to say they can't get there in the future, purely because they are so coachable and easy to work with."

Pete Lansley (@PeteLansley), a lecturer in football journalism at the University of Derby, is an FA Coach Mentor who coaches for Derby County Community Trust while reporting for the Guardian and the Daily Mail.