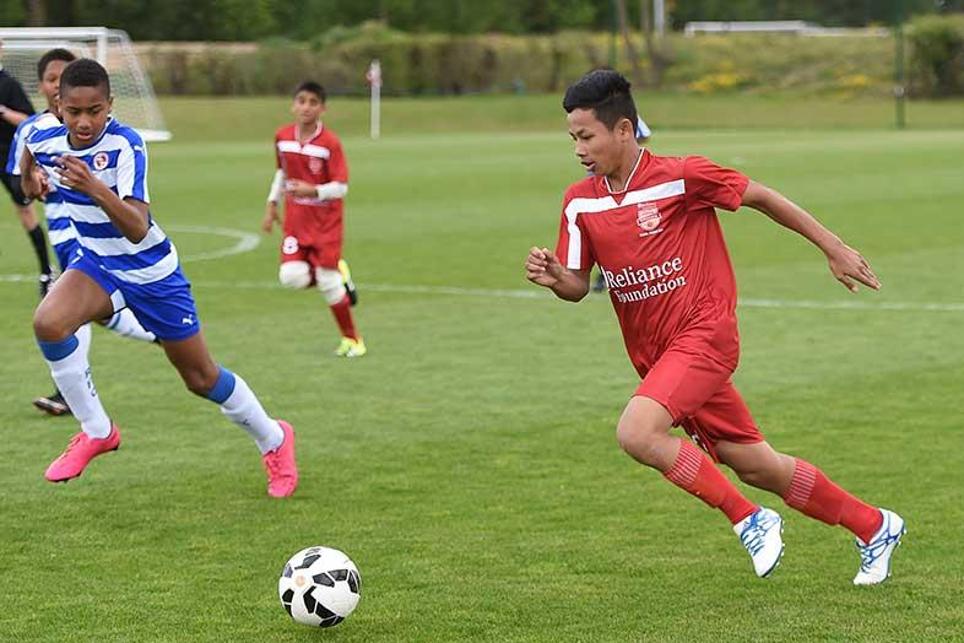 Koustav Dutta, 14, has been playing football for two years and travelled 45 minutes from his home in Rajarhat, in the neighbourhood of Kolkata, to the Atletico De Kolkata Scouting Festival for Reliance Foundation (RF) Young Champs.

There he impressed scouts to qualify for the final round of selections in Mumbai and earn his full-time residential scholarship with the RF Young Champs Programme.

Mark Vaessen, a Dutchman who has been coaching for 20 years and has a UEFA 'A' Licence, runs the Mumbai football school where 23 players live, receiving central board school education between football sessions in the early morning and under floodlights in the evening on an artificial pitch.

Many of the youngsters have come from broken homes. It took six months to get the passports for their trip to England as many children lacked the formal documentation or the family.

The 21 players who flew to the United Kingdom have since trained or played at the academies of Chelsea, Crystal Palace, Southampton, West Bromwich Albion, Manchester City and Liverpool.

"We see the future the same as in England to start at five years old."

While Vaessen admitted they conceded most of their goals early on as they adapted to the pace and strength of the English players, they earned a creditable 2-2 draw with Southampton and impressed throughout their matches against the academy teams of their age groups.

"I like football because I want to be a professional footballer, like [Lionel] Messi," Dutta, a left-footed midfielder, said.

In a cricket-mad country where football is established as the nation's second favourite sport, with ISL matches attracting average crowds of 27,111, young players have tended to start playing football at secondary school age.

This means that beyond the lack of facilities, home support and coaches, they also trail their European counterparts in terms of hours on the ball.

"We see the future the same as in England and Holland to start at five years old," Vaessen said. "What we are trying to do is make leagues for them at that age.

"But what we try and do now is train a little bit more, eight times a week, to get the time back that they lost, especially in the technical skills.

"I see the same talent in our players that I see in England. [But it’s] not only the talent here but the way that they are trained, up until now, and that's something I can hopefully be a part of that. If we come back in three years, hopefully you won’t see the difference in that."

There are about 20 artificial grass pitches in Mumbai, a city of around 20 million people, Vaessen points out, much fewer than the kids saw at Chelsea's Cobham training base alone.

Vaessen wants his Young Champs to take back the dedication to the sport they have witnessed during their tour of the Premier League's academies.

"I hope that they can see the love of football and the history within every club where we went," he said. "They must take that home. We must start the history of football in India.

"Football is already 100 years old here. I tell the players to live football, not only play it. Live it and love it."