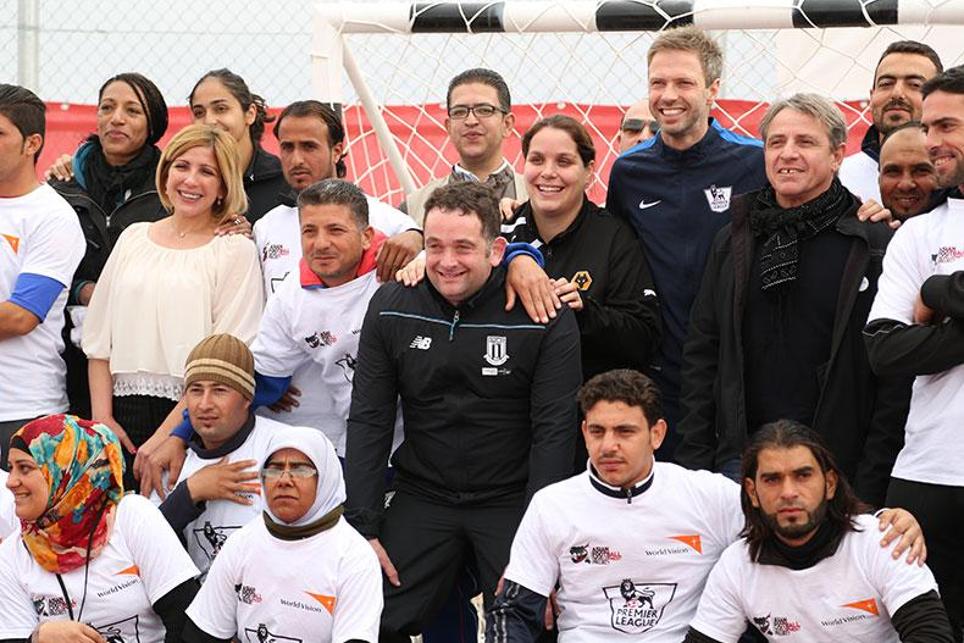 The Premier League is this week delivering a training course in the Azraq Refugee Camp in Jordan that will give 36 coaches the skills to help them set up and deliver a new football league for boys and girls in the camp.

The initiative, organised and funded by the Premier League in partnership with World Vision International and the Asian Football Development Project, will train 24 men and 12 women, including a number of Syrian refugee volunteers, who hail from World Vision Jordan, the Jordan FA, and a variety of aid organisations active within the camp.

Premier League coaches will supply the expert training for the coaches and referees, who will then run a 32-team youth football league in the camp, organised by World Vision International from a grant from the Premier League.

"The young people living in Azraq Camp have had their lives severely disrupted," Premier League Executive Chairman Richard Scudamore said. "Providing them with regular access to fun, high-quality football training and tournaments delivered by properly trained coaches means they will reap the benefits the game has to offer: teamwork, improved confidence and well-being.

"But equally importantly, it will give them a chance to return some much-needed normality to their lives."

The project will utilise a specially designed curriculum based on that used on Premier Skills, the Premier League's international programme which is run in partnership with the British Council.

A closing ceremony will take place on 19 November to mark the completion of the workshop. The ceremony will include a football festival, giving the newly trained coaches the chance to demonstrate the skills they have acquired on close to 100 Syrian boys and girls, who will take part in training sessions and tournaments, learning different football skills and techniques.

"Syria's future will be built upon its young people," British Ambassador to Jordan Edward Oakden said. "I'm delighted that the Premier League is investing in these young people, as is the UK as a whole, and helping them build the teamwork skills that Syria is urgently going to need to rebuild the country once this terrible conflict is over."

Azraq Camp is the second-largest refugee camp in Jordan, currently hosting over 20,000 refugees with 6,876 boys and girls aged 17 or under. World Vision International’s initiatives in the camp include making sport available to young people, providing them with not only physical benefits but improving their social, psychological and mental well-being.

"I am so glad that we can bring these skills all the way to Azraq Camp and show the Syrian children that even institutions like the Premier League are interested in them and their future," Steffen Horstmeier, Head of the World Vision Jordan office, said.