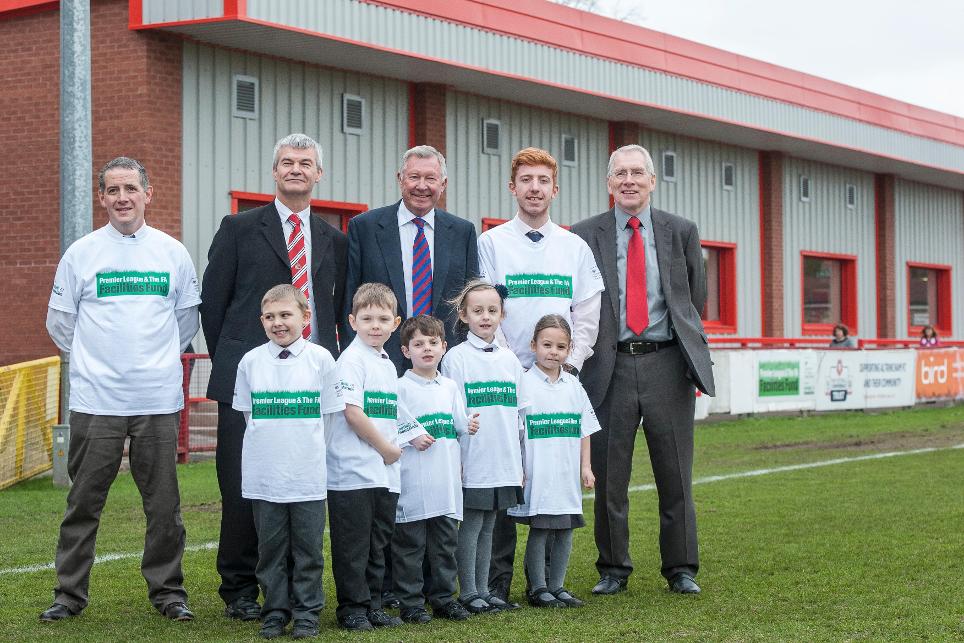 Premier League & The FA Facilities Fund External Link
'Every community should have a facility like this'
Scholes: These facilities will have an unbelievable impact

Sir Alex Ferguson CBE has praised the work of the Premier League & The FA Facilities Fund in supporting the grass roots of the game as he opened a new sports hall at Altrincham FC.

The manager, who steered Manchester United to 13 Premier League titles, visited the Vanarama Conference club (fifth tier of the football pyramid) to open a £752,000 community sports hall with more than half the funds coming from the Facilities Fund and from the Football Stadia Improvement Fund (FSIF).

The pavilion, which is next to the club's main pitch, will house many programmes delivered by Altrincham FC in the Community as well as help Altrincham to generate extra revenue. Of the money £269,470 came from the Premier League and The FA Facilities Fund (PLFAFF), which provides grants towards developing new or refurbished grassroots football facilities, while £114,880 came from the FSIF, the largest funders of non-league football in the country. The funds were delivered by the Football Foundation.

"This new community sports hall at Altrincham FC is going to be an invaluable resource for the club and community for years to come," Sir Alex said. "The money to make all this possible has come from the Premier League & The FA Facilities Fund, which is delivered by the Football Foundation and funded by the Premier League, The FA and the Government, through Sport England.

"That is a strong and important partnership as every footballer ultimately starts out at the grass roots. This sort of project is the perfect example of how the Football Foundation is working with its funders to provide football clubs with facilities that get more people playing sport, support football clubs' excellent community outreach work and create talent pathways through which promising youngsters can progress."

The PLFAFF has just announced another 80 projects around the country that are set to benefit from its funds. The latest tranche of funds will go towards projects that range from replacing unsafe goalposts to new floodlit 3G pitches as well as equipment to help pitch maintenance. It goes to at all levels of the football pyramid beneath the professional game (for a full list click here)

In the past year, 235 grassroots facilities projects have benefited from a total of £44.8million of investment from the PLFAFF. Minister for Sport, Helen Grant MP, called the Fund "a fantastic collaboration between government and the football authorities that is helping to strengthen the national game's grass roots right across the country".

She added: "Good facilities such as 3G pitches are crucial to encourage and sustain participation as well as help develop the next generation of talent.

"This fund, delivered through the Football Foundation, is also helping to bring communities together through the power of sport and I know it will continue to go from strength to strength."

It is not only clubs whose facilities benefit from the PLFAFF. Bridgemary School, in Gosport, Hampshire, has a new 3G pitch thanks to £255,397 from the Fund.

The new artificial pitch will replace poor-quality grass pitches and enable the school to offer to pupils, to local grassroots clubs and the wider community a first-class facility that can be used all-year round. The school's pitch, which also benefited from £150,000 from Sport England's Inspired Facilities legacy fund, will also be used by the Chelsea FC Foundation during school holidays and John Harley, a former player at Stamford Bridge and now a coach at the club's academy, opened the facility.

"Close links between the professional game and communities are crucial in helping to promote the next generation of talent and helping youngsters enjoy the benefits of physical activity," Harley said. "I'm delighted that the Chelsea FC Foundation will be able to carry out such work here in Gosport."