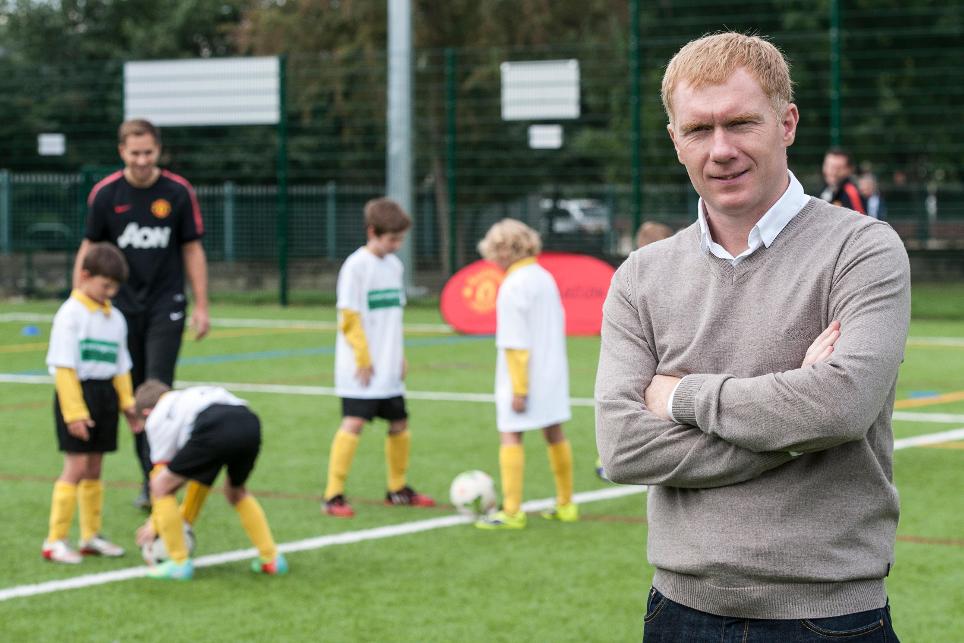 "Who wouldn't want to play at facilities like these? They will have an unbelievable impact on the local community."

Manchester United legend Paul Scholes has visited two venues upgraded with money from Premier League & The FA Facilities Fund in Salford, where he was born, and, seeing his son's opportunities to play football affected by the conditions of facilities over the winter months, the former midfielder fully understands how 3G pitches can help teams like his son's as well as the broader community.

"It brings kids together to play football, not just boys but girls and adults too," he tells premierleague.com. "You see kids around streets with nothing to do but if you put a football pitch and some goals there, you can virtually guarantee that it's going to pass a night for them. It's a way of getting kids off the streets and bringing people together.

"This is the real stuff, this is what giving back to the community is all about. What the Premier League is doing in providing these pitches is incredible, really."

Last autumn the Premier League, The FA and the Government via Sport England launched a funding package to boost grassroots facilities across the country, committing to £102 million of investment over three years to a new Premier League & The FA Facilities Fund.

The Fund, delivered by the Football Foundation, England's largest sports charity, aids the building and refurbishing of grassroots facilities, giving people from all walks of life the opportunity to play football at safe and well-maintained venues. Funding began at the start of this year and local communities have started to benefit from the new, 3G artificial grass pitches on their doorstep.

This week, Scholes, who is regarded by many as one of the best players to have graced the Barclays Premier League, saw for himself how the work of the Facilities Fund (PLFAFF) has made an impact in local communities.

He visited facilities at Salford City College's Eccles Campus, built with a grant of £179,276 from the fund, and at Salford Community Leisure’s Fit City, which got a £472,401 grant to refurbish their pitch.

At each venue, Scholes saw how the pitches are put to use for the good of the local community, meeting participants and coaches from the various groups who take part in coaching sessions at the facilities, such as disability, girls and school groups.

Scholes won 11 Barclays Premier League titles at Old Trafford and was part of the famous Class of ’92 squad, a group of players who progressed through the United youth ranks to become the backbone of United’s success. He believes these 3G pitches, which have floodlights to allow use in the evenings, can play a key role in developing local talent not only for clubs, but for the national team as well.

"I have seen it myself with my son, sometimes you can go six weeks without playing a game," Scholes says. "From November to January you are struggling for games but now, with these kind of facilities, you are guaranteed to play every week and you can play good football on it as well.

"It's not as if you are on a park pitch with glass everywhere, it's so much better to have a facility like this. It can only benefit that all year round kids can play football, and if kids are playing football all year round they can only get better."

Asked if facilities can help the journey from youth football through academy football to first-team football, Scholes said: "Without a doubt. We have seen the results in Germany and Brazil. Apparently, with an aerial shot of Brazil, you can see football pitches everywhere. They may not have the astroturf pitches but they have the weather. In England when it rains we are absolutely knackered, there's nowhere to play.

"The Premier League has put loads of money in to get as many of these pitches as we can. If we can do that then hopefully there's a brighter future for English football."

The Salford City College pitch was opened in January and is proving to be a hit. "If we could open all night, we would," says the college's head of sports development Phil Arbelo-Dolan.

"It's great for the college," Arbelo-Dolan says. "We used to have a sand-based pitch and every time it rained we couldn't use it, but now we can play on it whenever we want. It's not just the sports students who get access to it, every single student in the college uses this now."

The arrival of both pitches has allowed both the college and local authority to forge greater links with not only the local community but the Manchester United Foundation, who uses the venues for its coaching and educational programmes to help young people in the local area.

As well as hosting the Manchester United FA Girls' Centre of Excellence, the Salford City College site also allows the MU Foundation to deliver BTEC Levels 2 and 3 in Sports Coaching. There is also MU Foundation work taking place at the Fit City pitch. There Scholes found out more about the Barclays Premier League Works programme, which supports and gives opportunities to young adults who are not in education, training or employment.

"We very quickly discovered that we can't do anything by ourselves and this event, with all of these young people using the pitch, shows partnership in action," MU Foundation chief executive John Shiels says. "However, you can have as many partnerships as you want but if you haven't got the facility to deliver the programmes, you have got no chance.

"We chose to work in areas of social deprivation. Our coaches go in, our projects go in, and they start to build relationships. Those relationships are possibly the most stable things that some of our kids enjoy. We can't do it without facilities. The young people need a hub, they need a community and they need something to feel a part of."

The Fit City site replaced a sand-based pitch that was 20 years old and has created a buzz of interest in the Ordsall area.

"Demand from the local community is massive," Caroline Barrow, the Salford Community Leisure sports and leisure manager, says. "We've set up a system where it costs £1 to play because we were getting so many kids coming down and they thought it was amazing. They couldn't believe that it had been built in their area. Kids can come down after school so for the local police and the local community, they have seen a decrease in anti-social behaviour in the evenings.

"It's had a massive impact. We are looking at getting people more active more often and we have seen a rise in our figures in terms of people using the pitch. It's all ages, from juniors to senior 5-a-sides. It's lifted the whole area, it's really exciting times."