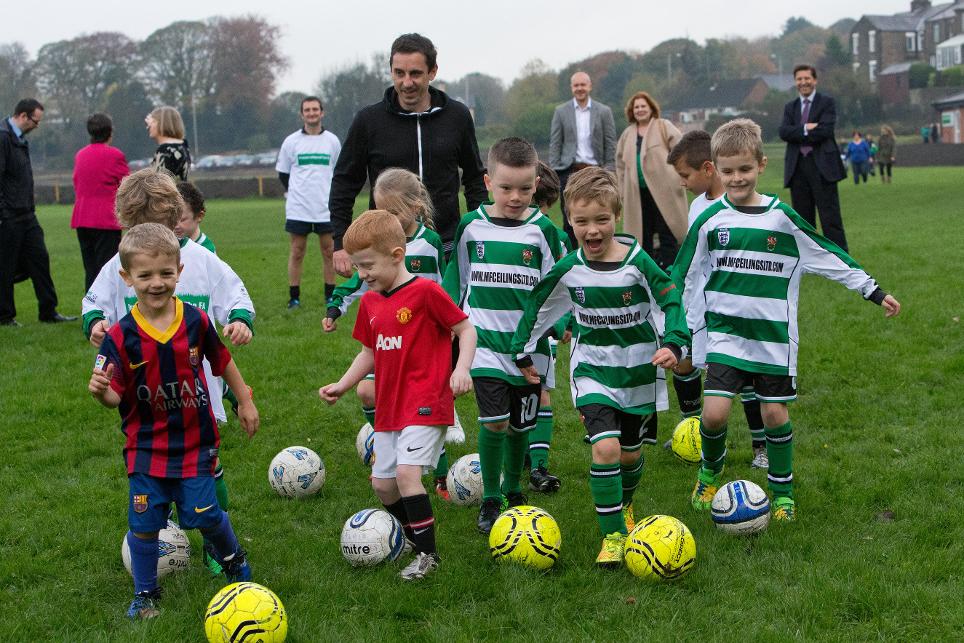 Gary Neville opens a new clubhouse for the Horwich St Mary's club in Bolton, which was funded by the Premier League & The FA Facilities Fund

Manchester United legend Gary Neville saw at first hand the impact a state-of-the-art facility can have on a local community when he officially opened a new clubhouse for the Horwich St Mary's club on the outskirts of Bolton.

Horwich St Mary’s boasts 26 teams from Under-7s upwards but until this year, they had the most basic of facilities. Players had to change in two fire-damaged and rusty shipping containers which had no heating or running water, making the match-day experience far from ideal for the 350 plus footballers representing the club.

But thanks to a £738,807 grant from the Premier League & The FA Facilities Fund (PLFAFF), together with £190,000 of funding from the club itself and £50,000 from Sport England's Protecting Playing Fields Trust, Horwich St Mary's now has a clubhouse to be proud of, with four changing rooms, two rooms for officials, a multi-function suite, a kitchen, disabled facilities and spectator toilets.

There is also a new car park and road access while an area of grassland is being improved to house grass pitches, including junior and mini-soccer pitches, from next summer.

Neville, who visited the site three years ago before it was developed, was impressed by the "incredible" transformation of the facility.

"It wasn't particularly pleasant down here before but now you have got somewhere to go inside and have a cup of tea and sit and talk while the youngsters are outside enjoying themselves," Neville, who won eight Premier League titles at Man Utd, told premierleague.com. "Football is a social experience, it has always been, and people need to understand the importance of that at grassroots level.

"Facilities are important, it gives more enthusiasm to the coaches, they will be happier now coming down here knowing that they have got facilities to support them. We didn’t have facilities like this when I was younger, we got changed in the car a lot of the time. I do believe it should the basic right of every community to have a facility like this."

The PLFAFF was launched last year and is funded by the Premier League, The FA and the Government via Sport England, who have committed to £102 million of investment in grassroots football over three years.

The Fund, delivered by the Football Foundation, England's largest sports charity, enables the building and refurbishing of grassroots facilities across the country, giving all sections of the local community the opportunity to play football.

And Football Foundation ambassador Neville, who is now a pundit for Sky Sports as well as a coach for the England national team, believes improving grassroots facilities can only be a good thing for the English game at all levels.

"If we want to try to produce England players and English players for the Premier League, then this is where it all starts," he added. "The best facilities possible will mean better coaching and better standards of play.

"As The FA Chairman’s Commission recently stated, improving this country's grassroots facilities is critical to success of the game. As an England coach I find it very encouraging to see the Premier League & The FA Facilities Fund making a difference.

"In an ideal world one of the children here will go on to play for England and fulfil their dreams but at the very least, this facility will provide somewhere where they can socially engage. You learn so much taking part in a team sport: discipline, sharing, disappointment, praise and dealing with injuries. All the things you learn in a team sport are lessons for life."

The official opening on Friday, which was also attended by Bolton West MP Julie Hilling, marked the culmination of 13 years of graft by many volunteers at the club, not least by club secretary Leslie Allon, who received a plaque in recognition of her hard work and determination that will be fixed to the wall of the new pavilion.

"It's the realisation of a dream," she said. "In the 21st century the facilities we had were just not acceptable. These kids deserve better and we have provided it now. We can build on this and they will enjoy the games more.

"This will have a huge impact on the local community. We have already got an influx of children coming down and wanting to play. We don't want world beaters, we just children to come down and have fun and enjoy playing football.

"Without the years of hard work from those at the club and funding from the Premier League & The FA Facilities Fund, our vision and hopes for Horwich St Mary’s could not have been realised, so we are all extremely thankful for all those who have contributed to this great effort."

The development of the Horwich St Mary's facility will have significant implications for the club, which is now planning to run more teams, with emphasis placed on widening participation to include girls' and women's teams.

The club also plan to increase and improve the standard of coaching, while the Horwich St Mary's teams, who were playing at various venues in the local area, will now be able to play their fixtures at a place all can call home. And with an impressive new building, the club can improve and generate new revenue streams to make it a sustainable business.

"Without facilities like this, local footballers are just not going to enjoy the experience of playing football," said Football Foundation chief executive officer Paul Thorogood. "We are trying to produce more facilities like this for people to play, to develop the future talent of the country, and to provide a better experience at grassroots level for people who love to play football."