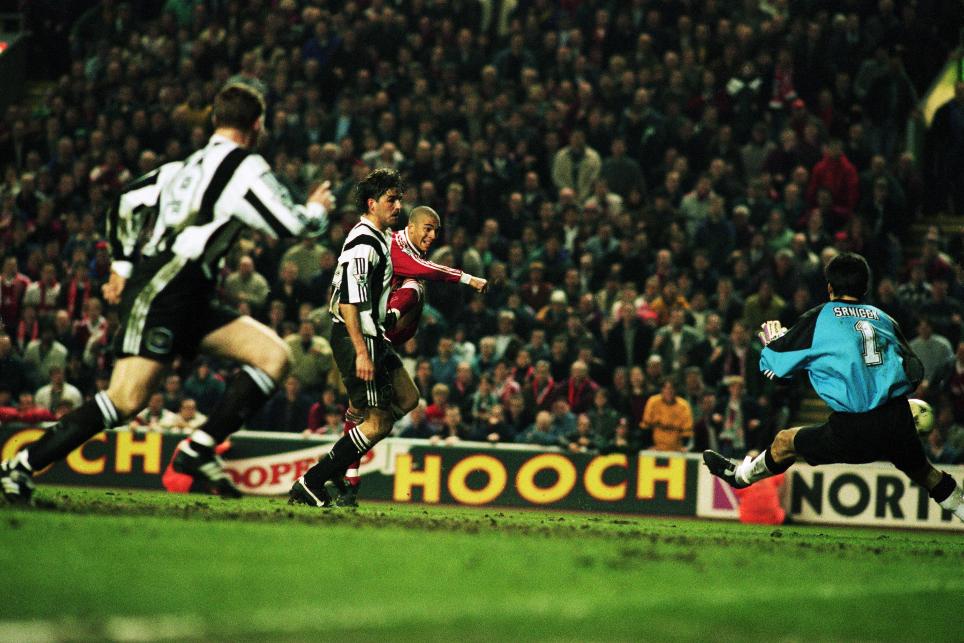 Season after season, the Premier League throws up a series of gripping contests packed with drama and breathtaking action. Here David James looks back on one of the greatest matches in tine competition’s history.

On 3 April 1996, Stan Collymore struck deep into stoppage time to give Liverpool a 4-3 victory over Newcastle United in a match that had huge ramifications at the top of the table, and James, goalkeeper for the victorious Reds that day, told premierleague.com about the team's "tremendous relief" at the final whistle.

Going into the match, Kevin Keegan's Newcastle were three points adrift of Premier League leaders Manchester United with two matches in hand, the first of which was a tough trip to Anfield.

Like Newcastle, Liverpool were also in pursuit of their first PL title and could move to within five points of the summit with victory.

Roy Evans' side got a perfect start when Robbie Fowler headed the hosts in front, but Les Ferdinand and David Ginola turned the match on its head to put the Magpies 2-1 up after 14 minutes.

Fowler levelled after half-time but Faustino Asprilla put Newcastle in front once more moments later. Then Collymore took centre stage, prodding in the leveller on 67 minutes before rifling the winner past James in the dying moments. Anfield erupted in celebration, and former England goalkeeper James looks back on winning the contest with pride.

"To end up 4-3, and getting the goal in the last minute, was just a tremendous relief," he said. "In the match there was a moment when we thought we weren't going to do it."

The victory was the first of two memorable 4-3 encounters against Newcastle in successive seasons, with the Liverpool winner coming in the last minute on both occasions.

"The first one, with Stan Collymore's winning goal, was just a wonderful game of football for everyone to watch. Looking back you feel honoured to have been a part of it.

"At the time you don't think about it being something that people will talk about for years to come. I remember it was 3-3, and I think Ginola had a chance which I managed to block and then we went down the other end and scored.

"So it was more a feeling of relief of getting three points at the time. Then, year on year, people say 'Oh, did you play in that game?' and I say I did. It's definitely one to have in the DVD collection."

"I hate that goal. At the time, I spent quite a few weeks afterwards moaning about the fact that I should have saved it."

Manchester United went on to win the title for the third time in four seasons, despite a free-scoring Newcastle side being 12 points clear at one stage.

Liverpool finished third, 11 points off the top, and James was ever-present between the posts for the Merseyside club.

The goalkeeper, who is the fourth-highest appearance maker in PL history with 572 appearances, was also on the receiving end of one of the season's memorable moments, as Leeds United striker Tony Yeboah crashed a thunderous volley in off the underside of the bar as they beat Liverpool 1-0 in their first home match of the season.

While the strike is widely regarded as one of the finest in Premier League history, James has a very different perspective.

"I hate that goal," he said. "At the time, I spent quite a few weeks afterwards moaning about the fact that I should have saved it.

"I got to see the coverage because it was the live game on Sky Sports. I think the commentator said about 30 seconds beforehand 'all this game needs is a goal' - and then Tony Yeboah turns up and scores.

"I blame the commentators!

"But it was, obviously, a terrific strike, and it was in a rich period of form for him at the time as well."

The Ghanaian striker scored 12 PL goals in 1995/96, including a hat-trick at Wimbledon that included another fabulous individual effort, this time a half-volley that went in off the crossbar.

"Even by his standards, breathtakingly brilliant," was the call by Sky Sports commentator Martin Tyler, but boyhood Liverpool fan Yeboah said the effort against the Reds is his fondest memory of his time at Elland Road.

"When I was a kid I was a very big Liverpool fan, so when I played against Liverpool I was so excited," Yeboah said. "It's a game I'll never forget. The goal I scored was the goal of the year. I can watch it every day."