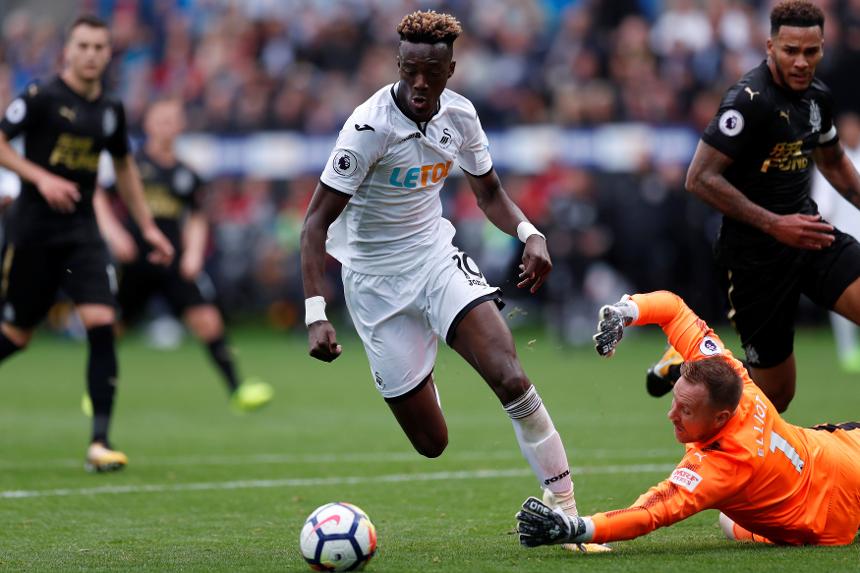 Ahead of Spurs match, Adrian Clarke analyses why Paul Clement's men have struggled for goals

Rotation could put Liverpool defence in a spin

Two successive clean sheets away from home, three if you include last season, should give Paul Clement's Swansea City an element of confidence for their visit to Wembley Stadium this Saturday.

In terms of shape, they have been relatively solid this term.

However, to stand a chance of inflicting a second home defeat on Tottenham Hotspur, Swansea know they must find much greater penetration inside the final third.

On paper Clement's tactical approach is a positive one.

Whether he's chosen to start with a back three or four, Clement has consistently paired two strikers up front, Jordan Ayew and loan signing Tammy Abraham.

While both men have shone in snippets, both scoring in the 2-0 win at Crystal Palace, goalscoring chances have been few and far between.

Both forwards have mustered only five shots on goal in four matches, hitting the target twice apiece.

This in part explains why Swansea currently sit bottom of the Premier League table when it comes to efforts that test opposing goalkeepers.

There isn't necessarily a lack of quality in the Swansea front line. Both Abraham and Ayew are fast, powerful strikers with the ability to trouble rival sides.

It is more a case of the rest of the side needing to be in better sync with them over the course of 90 minutes.

Abraham is a player who is accomplished in the art of holding up the ball, a trait that helped him shine during this summer's UEFA European Under 21 Championships.

But across the opening four Premier League matches he has not been involved enough in build-up play.

Last weekend at home to Newcastle United, for example, he had the fewest touches of any starters (32) and was found with a pass by only five of his team-mates.

Interestingly, Swansea's creative midfielders, Tom Carroll and Renato Sanches, did not pick out Abraham with a single pass.

It is now more than two full matches since Carroll found Abraham and that combination has only totaled four passes over the course of the campaign to date.

The team needs them to link up much more.

It is not solely down to the 19-year-old but you could argue he could work a little harder to provide angles for the midfielders behind him.

The furthest distance Abraham has covered in a PL match this term is 8.28km, a figure that is on the low side.

Ayew, somebody who has been asked to float around more than Abraham, averages 10.8km.

His challenge now is to get into the box to support Abraham more regularly.

The Ghana forward has looked bright at times but has not posed enough of a goal threat. Much of his best work has occurred out wide, or in deeper areas.

With Wilfried Bony back at the club, these two forwards need to show Clement this weekend that they can get him goals this season.

I believe they can function well together but for now the chemistry between themselves and those around them can improve.

To relieve pressure at Spurs this weekend, Swansea will need these two strikers to offer a threat inside the home side's half.

If not, it could be a long afternoon.