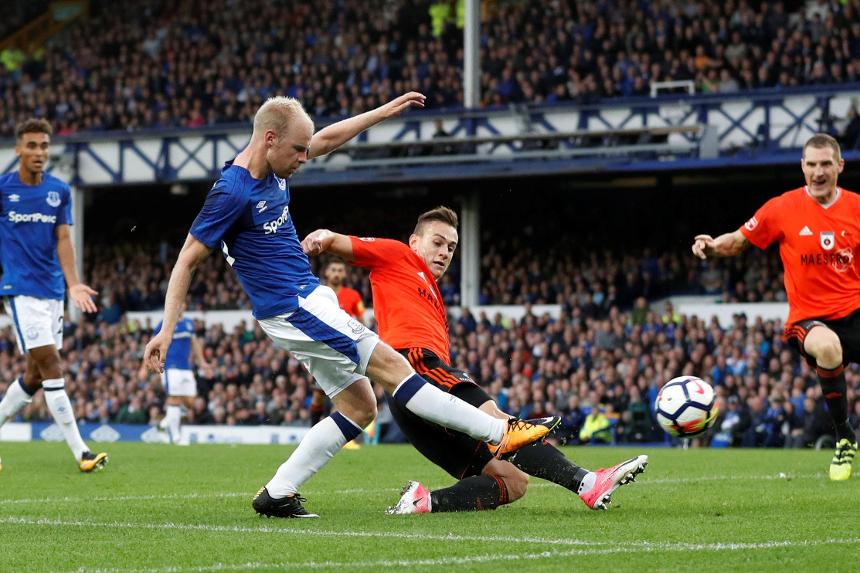 Adrian Clarke analyses how the additions of Klaassen, Rooney and Ramirez will make the Toffees less reliant on individuals this season

Adrian Clarke is analysing three clubs set for a dramatic change in style this season. He follows on from West Ham United with how a significant void up top will be filled by Everton.

If Ronald Koeman does not replace Romelu Lukaku with a centre-forward of a similar ilk, then we will witness a style change from Everton this season.

So much of their attacking play was built around sliding passes down the sides for the forceful Belgian, now of Manchester United, to run on to. Without such a power-packed presence they must come up with an alternative approach.

What will the changes be?

First of all they need to spread the goals around the side better than they did last season. Ross Barkley's tally of five was next-best behind Lukaku's 25.

Bringing in three top-quality finishers in Sandro Ramirez, Davy Klaassen (pictured top) and Wayne Rooney is a nod towards the importance of this.

Each can create but between them they scored 33 league goals last term.

To further aid the dispersion of Everton’s goals around the side, their principle front player will also need to hold the ball up better than Lukaku did last term.

Although his 65.49% pass success rate was not poor by a striker's standards, retaining possession is not a natural strength of Lukaku's.

Often play would break down when passes were fired into him, and because he loved peeling towards the channels, Everton would sometimes lack a pivot in the centre of the field.

While they will lack his power and pace, new boys Ramirez and Rooney are better when it comes to central hold-up play.

These qualities will help Everton's midfielders build the confidence to make "third man" forward runs in beyond them; this is something the Toffees will desperately need in order to penetrate.

Of all Premier League forwards to feature at least 20 times last season, Rooney topped the charts for pass accuracy, with 84.21%. Albeit many of his appearances for Man Utd were in a deeper role.

Ramirez passed with 79.01% accuracy for Malaga in LaLiga and he is adept at shielding the ball away from his markers.

The physicality of English football may make it more difficult for the young Spaniard, but it speaks volumes of his ability that only five PL centre-forwards topped his pass success rate last term.

If Everton do not possess a pacier option to spearhead their attack, Rooney or Ramirez must bring support players into the game.

Who will they be?

Youngsters Ademola Lookman and Dominic Calvert-Lewin immediately spring to mind as forwards who like to break into the box from deep. Tom Davies, Kevin Mirallas and Yannick Bolasie are capable too.

But it is Klaassen who stands out most.

Having scored 14 goals for Ajax last season, he will be targeting double figures at Goodison Park, and is noted for his ability to pop up inside the area to score.

How Klaassen links up with Rooney and Ramirez will have a major influence on results.

To keep up with their top seven rivals, Everton must share the goalscoring responsibilities better in 2017/18.

Many of the new arrivals seem well equipped to lend a hand.