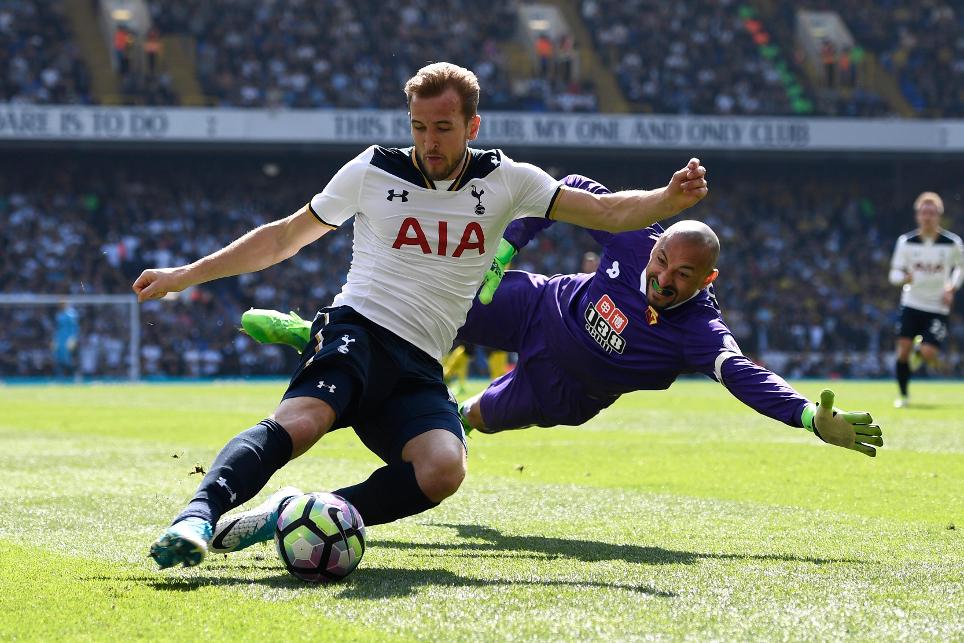 The race to become top scorer in this season’s Premier League features a quartet of familiar star names, and it’s a battle that will go right down to the wire this Sunday.

Our tactics expert Adrian Clarke assesses the performances of those Golden Boot contenders, and today he assesses the striker who is leading the way with 26 goals, Harry Kane…

Harry Kane scored his third PL hat-trick of a fabulous campaign with a stunning four-goal salvo at the King Power Stadium this week, and it leapfrogged him ahead of Romelu Lukaku in the scorers’ charts.

With the best minutes-per-goal ratio of all the Golden Boot contenders (94.3 mins per goal) it is a lead he fully deserves as the Spurs star is the most complete centre-forward in the division.

Tall and robust, he has a physical presence that ruffles defenders. The 23-year-old is also deceptively quick, and extremely hardworking.

Mauricio Pochettino demands that he stays on the move, joining in with most attacks, and this constant involvement wears his markers down.

His desire to sprint into goalscoring positions also marks him out from the rest.

Kane’s right foot has been absolutely lethal during 2016/17.

While he is more than capable of shooting with his weaker left, or climbing high to head the ball in, 20 of his 26 strikes have come from his favoured side. Whether it is one or two-touch, on the floor or as a volley, Spurs’ shining star has been instinctively excellent in front of goal.

Kane’s 64.7% shooting accuracy and 31% conversion rate are both higher than those of Romelu Lukaku, Alexis Sanchez and Diego Costa.

Assists made to Kane

There is a perception that Dele Alli is his chief supplier, and although the England pair combine quite beautifully, only two of his goals have been teed up by the classy attacking midfielder.

This season Christian Eriksen’s dead balls have laid on four goals for Kane, who has also struck up a terrific understanding with Son Heung-min, especially on the counter-attack.

If Kane is crowned Golden Boot winner for the second season in succession this weekend it would mark another campaign of imperious progress.

Next season he will be targeting the 30-goal barrier.

See: Lukaku the most improved