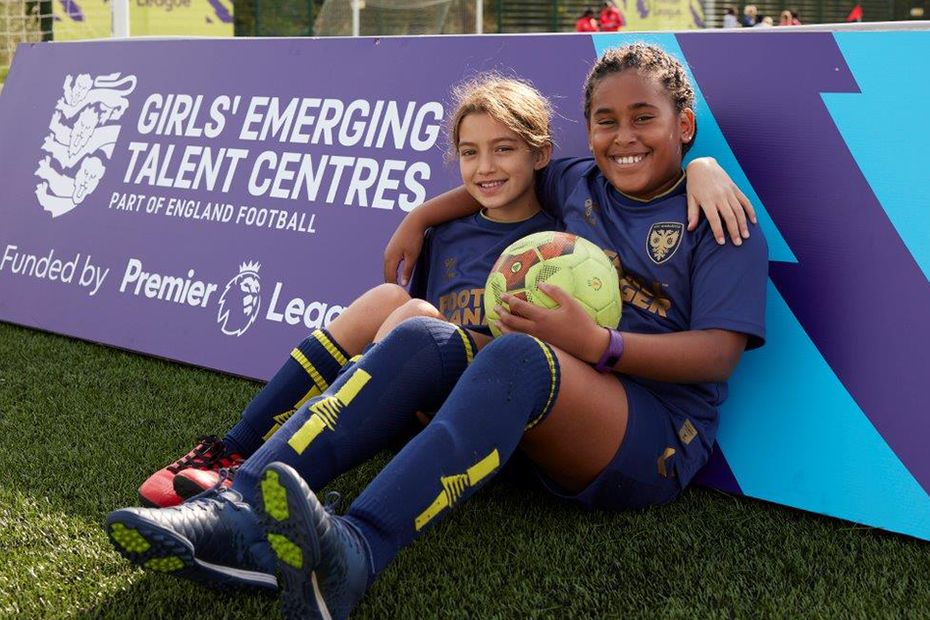 The site is one of 70 FA Girls' Emerging Talent Centres, supported by the Premier League, with the aim to provide better accessibility and more inclusivity for young female players and enhance player development.

Funding of £5.25million from the Premier League across the next three years will see the number of female players aged 8-16 engaged in The FA programmes across the country more than double from 1,722 to over 4,200 by the end of the 2023/24 season.

This is part of the Premier League's £21m investment in women's and girls' football over three years. Within this is £10.5m for the grassroots game and £3m for a new strategy for the FA Women's National League.

The Premier League Trophy and Women's UEFA Women's EURO 2022 Trophy were present together for the first time to mark the partnership. A tournament, featuring 12 Under-11s girls teams from the Premier League Primary Stars programme, was run by Brentford on the day.

Gunnersbury Park Sports Hub is one of the largest outdoor sporting facilities in London and was made possible thanks to a £4m investment from the Football Foundation, funded by the Premier League, The FA and Government.

Asante, who won 71 caps during a 14-year international career, and White took part in a Q&A with the participants, sharing their advice on working hard to become the best version of yourself and emphasising the focus on enjoying playing football at an early age.

"We really hope the legacy of us winning the Euros is to empower people to live out their dreams and to want to play football and be active," said the Lionesses' record goalscorer White, who was the spearhead of the victorious EURO 2022 side.

"Seeing the amount of girls playing and the smiles on their faces is just incredible.

"The investment from the Premier League is significant and an amazing opportunity which provides access for more young girls to play. Hopefully it means the women’s game will continue to grow and grow.

"This is all about the next generation of girls being given the accessibility and opportunity to play football in safe and fun environments."

"This is such a powerful partnership and supports our endeavour to offer football to every young girl in every community."

The first 60 licences for Emerging Talent Centres, which will be operated for at least 30 weeks per season, have now been confirmed and the venues can be found on the FA website.

Licences were allocated on a regional basis with a mix of professional football clubs, club foundations and County FAs selected to deliver coaching programmes at the centres to develop the talents of young players.

"The women's game has so much potential for growth, and working with the Premier League and their experience of developing talent and delivering community programmes is hugely exciting," said Kay Cossington, The FA's Head of Women's Technical.

"Seeing the two trophies together actually gave me spine tingles because this is such a powerful partnership and supports our endeavour to offer football to every young girl in every community. Through the FA Emerging Talent Centres, we will engage 2,500 more girls in the next three years."

Funding for the Emerging Talent Centres is on top of investment in the PL Primary Stars programme, which sees the League fund 105 professional football clubs across the pyramid to deliver free school sports sessions to five to 11-year-olds.

"The Premier League and our clubs are committed to developing football for everyone and it is important that opportunities for girls will increase, so we are delighted to support the FA's Emerging Talent Centres," said Nick Perchard, Head of Communities at the Premier League.

"These ETCs across the nation will increase and diversify the talent pool and give more girls than ever the chance to take their first steps on the pathway towards playing professional football and following in the footsteps of the inspirational Lionesses."

Lee Doyle, 56, of Southall, has been named Brentford's Community Captain in recognition of his incredible work in the local area.

The Community Captain armband and pennant is being given to more than 100 members of the public, who have made an outstanding contribution to their club and local area, as part of the Premier League's 30th anniversary celebrations.

Lee, Chief Executive Officer at Brentford FC Community Sports Trust, was nominated due to his remarkable commitment and innovation while leading the organisation over a 35-year period, which has benefited the local community across all ages and backgrounds.

He has developed programmes that use sports activities, blended with programmes in health, education and employability, to create positive, measurable outcomes for participants of all ages.

Brentford wanted to recognise his achievements by awarding him the accolade of Community Captain.

"It was a surprise and an honour really to be named as a Premier League Community Captain but I'd like to accept the award on behalf of the team of people at our Community Trust who make things possible for others," he said.

"Receiving the licence for the Emerging Talent Centre will boost our programme for girls. This gives us an area of focus and more resource so girls can grow and love the game."