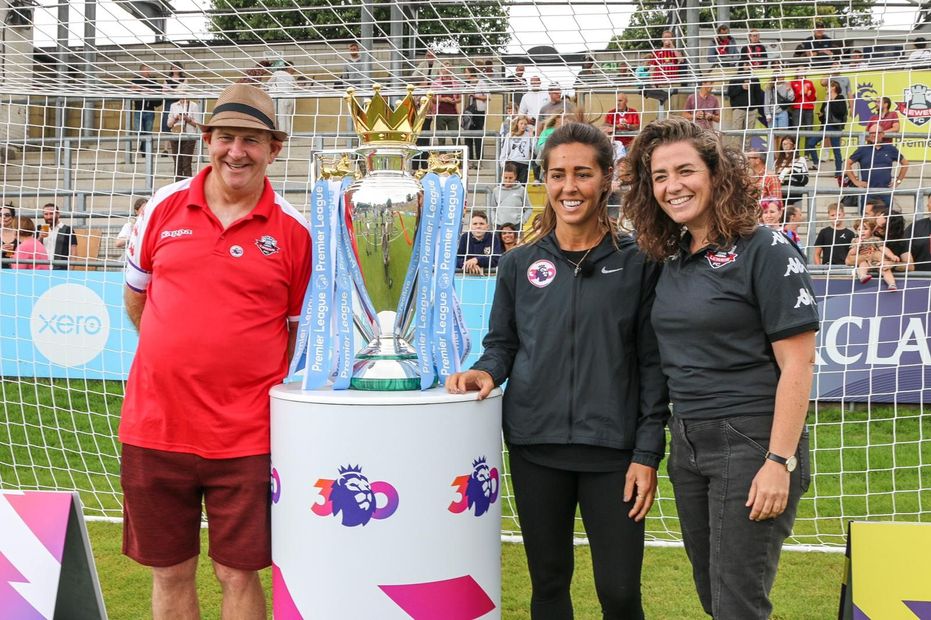 Alongside Lewes FC Chief Executive Maggie Murphy, Williams cut a ribbon on the goalposts ahead of the FA Women’s Championship (FAWC) fixture against Southampton and also led the teams out for the south-coast derby.

The new playing surface is 95 per cent natural grass, intertwined with a mesh carpet to ensure stability, as used in the Premier League.

This is one of the first four women’s pitches to be opened to support the growth and professionalism of teams in the FA Women’s Super League (WSL) and Women’s Championship, made possible by the Premier League Stadium Fund.

In addition, investment via the Premier League Stadium Fund is available for WSL and FAWC clubs to support improvements of their stadium facilities for players, supporters and officials.

The Premier League Trophy also visited The Dripping Pan, which has been home to Lewes since 1885, as part of the celebrations of 30 years of the top-flight competition.

Williams, who won a record 172 caps with the Lionesses said: “I am thrilled to help open the new football pitch at Lewes FC, it is a brilliant place to play and watch football. It’s great to see the Premier League’s commitment to investing in and helping to progress the women’s game.

“This will allow the women’s team to have the opportunity to play on the same quality pitch as the ones used in the Premier League, enabling the players to develop further and showcase their skills.”

“Our aim is to continue our commitment to professional women’s football and I know that both the Lewes and visiting teams and managers are so excited to try out the new pitch, which will allow for high-quality and entertaining football this season and beyond.

"It’s very exciting for us as a club, and for all our supporters, and will help us to attract even more talented players.”

Long-serving groundskeeper and popular local figure Roger Feltham, 61, who has tended to the pitch at the stadium for 38 years and will continue to help maintain the new surface, was recognised as the club’s Community Captain.

The Community Captain accolade is being given to members of the public who have made an outstanding contribution to their club and local community, as part of the Premier League’s 30th anniversary celebrations which also includes a Trophy Tour visiting more than 50 professional, non-league and women’s clubs across England and Wales who receive funding from the Premier League.

Feltham was presented with a special Community Captain’s armband and pennant by Williams and Murphy and a plaque engraved with Roger’s name was added to the Premier League Trophy plinth.

During the Trophy Tour, the League will be announcing new financial commitments to benefit fans and communities. This includes increased investment into the Premier League Fans’ Fund, with £5m available to support fan engagement projects across the top four divisions of the football pyramid. The League is also investing an additional £13.5million into the Football Foundation to create small-sided pitches in the heart of communities that need them the most.

The tour will also give an opportunity to highlight new Premier League investment into women’s and girls’ football, including the Emerging Talent Centres announced earlier this summer.

Premier League Chief Executive Richard Masters said: “The continued success of Premier League football enables us to provide unprecedented investment in communities and wider football. As we look to the future, we are committed to investing more than ever, to help develop the game and provide opportunities to people of all ages.”