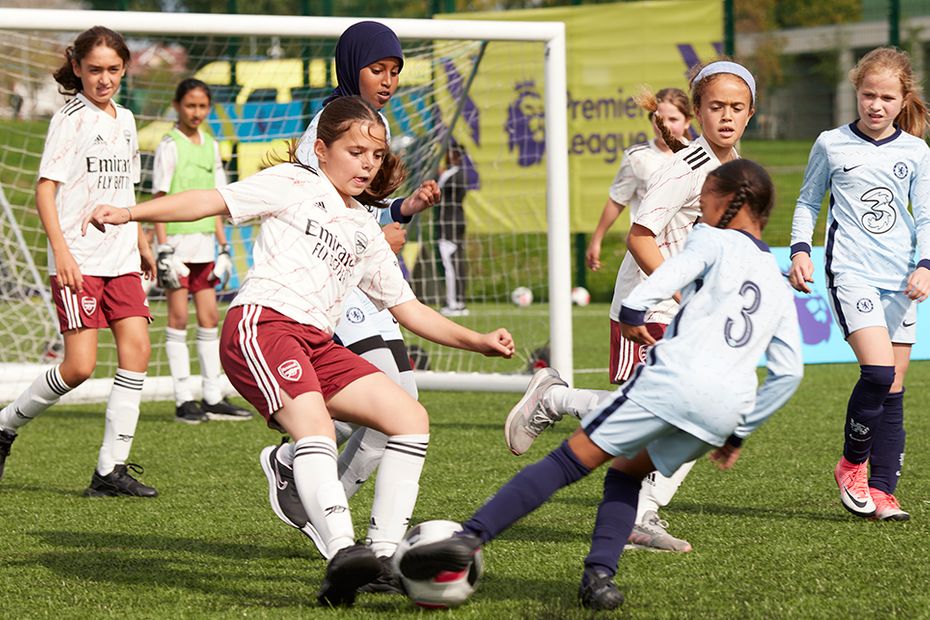 We visit Gunnersbury Park Sports Hub to see how the Premier League, The FA and clubs are working together to boost girls' football

Last week at Gunnersbury Park Sports Hub in London, 11 teams comprising girls who deeply enjoy football and playing for their respective teams came together to celebrate their love of the game.

For some, it's a deep passion that they want to take forward into the professional arena, while for others it presents an opportunity to play a fun game alongside friends that become so close-knit they want to go on the field and help one another.

"There were no girls' teams growing up, so watching all this and seeing all the girls enjoying themselves is so exciting and lovely to see."

These are the words of UEFA Women's EURO 2022 winner and England's record goalscorer Ellen White, with the smiling faces of the tournament's participants behind her.

White's experience of growing up with football was a lot different to those who were present at the Premier League U11s tournament, because a girls' team wasn't readily available at her school.

"I played football with the boys at my primary school and then also my local boys' team, but then I got told that I wasn't allowed to play with the boys any more," she said.

Having been not much older than the girls playing in this tournament at the time, White looked on in awe at the opportunities being presented to the young girls.

She said: "We want it to be so easy for girls to play football and enjoy it."

Fellow Lionesses legend Anita Asante has accolades with numerous clubs including Arsenal and Chelsea, as well as currently being a first-team coach at Bristol City WFC, and she was also impressed with the talent on show at Gunnersbury.

For both Asante and White, being at Arsenal when they were younger gave them the chance to be part of an academy that offered both coaching and facilities to use.

Asante remarked that she "felt extremely lucky to have the opportunity and it was one I wasn't going to take for granted".

However, the Premier League doesn't want it to be purely luck.

The Premier League investment into The FA's Emerging Talent Centres (ETC) is just one way of showing that commitment to pushing and driving the women’s game.

Over the next three years, the Premier League is investing £5.25m into Girls' ETCs in order to support player pathways for girls across 70 centres. The main area of focus here is girls aged 8-16.

The Gunnersbury tournament comprised teams from almost every part of London, and what was evident was that the contingent were extremely diverse.

While centres have been available in the past, reaching all the communities possible has always been an area of struggle, and one that huge steps have been taken in, as displayed by the participants of the tournament.

Asante remarked on how programmes like this not only mean a lot for getting girls involved in football, but also "a shift in society when we start to normalise the roles of women, allowing girls to be inspired and to inspire… something that communities get behind locally".

For her, the personal development side that football brings is evident.

Tournament champions AFC Wimbledon have benefited from the programme, and U11 player Alice spoke about the event signifying "a great opportunity for girls to play football and have fun with friends".

Team-mate Leilani added: "I know not every girl gets the opportunity to play football but I'm really glad that we get the chance to."

Both girls were beaming both on and off the field and it was clear to see what programmes like this mean to them and their development.

Most notably, they both referred to the impact their coaches have had on them and the way they think.

Traits such as "not giving up" and "trying your best" were mentioned as part of the mantras they abide by, ideals that slot into every walk of life.

Though we know that barriers to entry still exist for girls in football, it's also clear that the mindset towards the women's game is changing.

And as more effort goes into creating pathways for these girls who want to play socially and professionally, we get renewed confidence, like that of Leilani and Alice, that there is a path to navigate for girls in football.