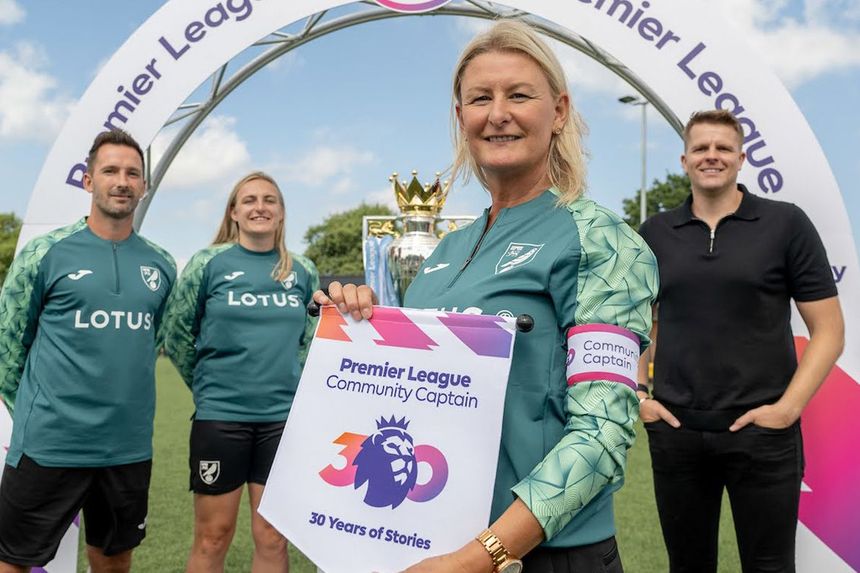 Jackie Thornton has been named as Community Captain by Norwich City in recognition of her incredible work in the local area during 24 years of work with the club's official charity, the Community Sports Foundation.

The Foundation's Head of Development played an instrumental role in the construction of community hub, The Nest. The facility is located on a 22-acre site in Horsford, near Norwich international airport, and opened in 2021 on a previously derelict plot of land.

Each year, more than 110,000 people use The Nest's facilities, which include a floodlit full-size 3G pitch, high-quality grass pitches, indoor multi-space areas, an IT suite, residential and catering facilities, and accessible changing rooms.

Activities delivered by the Foundation at The Nest include social projects to boost mental health and combat loneliness, providing access to sports sessions and experiences for people with disabilities, and engaging local young people through schemes including Premier League Kicks. The venue also hosts FA Women's National League home matches for Norwich City.

The Community Captain accolade is being given to members of the public who have made an outstanding contribution to their club and local community, as part of the Premier League's 30th anniversary celebrations. These also include a Trophy Tour, which is visiting more than 50 professional, non-league and women’s clubs across England and Wales who receive funding from the Premier League.

"I feel very proud and privileged to receive the Community Captain award," said Jackie. "But I would like to accept the award on behalf of everybody who has contributed to the Foundation over many years, as well as helping to build The Nest.

"We've got amazing facilities here engaging 110,000 people every year from toddlers to people aged 86-years old. The support and backing of the Premier League over the years has been essential for us to grow and develop. Without that, programmes could not take place."

The event took place on the fifth day of The Canary Cup football tournament. Under-10s and U12s boys development teams from 10 football clubs around the country were able to see the Premier League Trophy up close and have their photos taken.

Foundation Chairperson and TV presenter Humphrey added: "Jackie Thornton is our Community Captain. It's a moment of recognition for someone who's been with the charity for an incredibly long time and was totally instrumental in us being able to build The Nest."

"Football is something that brings communities together, inspires young people and changes lives. Something that we don't celebrate or talk about enough is that the Premier League is known as the best football competition in the world, but it's also a competition that is giving hundreds of millions of pounds to charity.

"It's a competition with a heart and a real clear understanding that football is more than just a game."

Drury, who captained Norwich in the Premier League during 12 seasons playing for the club, said: "Jackie's the perfect Community Captain because she's got leadership skills and had that vision about what she wanted to achieve. It's the same as on a football pitch. You need everyone on your side pulling together in the same direction."

Premier League Chief Executive, Richard Masters, said: "As we mark 30 years since the Premier League first kicked off, it is important we celebrate the unsung heroes who deliver brilliant work in their communities. These people – whether they are participants, coaches, volunteers or long-time employees – are the lifeblood of their clubs and their communities.

"The continued success of Premier League football enables us to provide unprecedented investment in communities and wider football. As we look to the future, we are committed to investing more than ever, to help develop the game and provide opportunities to people of all ages."

During the Trophy Tour, the League will be announcing new financial commitments to benefit fans and communities. This includes increased investment into the Premier League Fans’ Fund, with £5m available to support fan engagement projects across the top four divisions of the football pyramid.

The League is also investing an additional £13.5m into the Football Foundation to create small-sided pitches in the heart of communities that need them the most.

The tour will also give an opportunity to highlight new Premier League investment into women's and girls' football, including the Emerging Talent Centres announced earlier this summer.