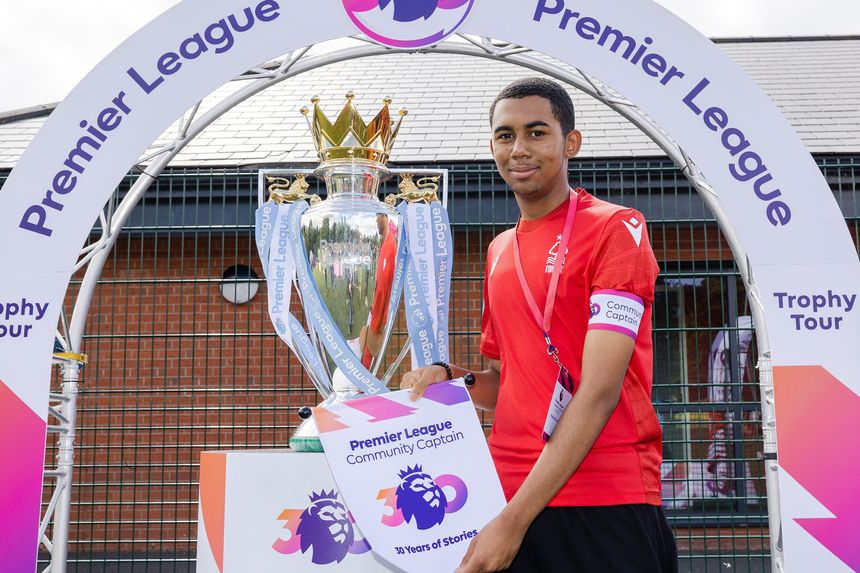 Emirah Burnett, 14, honoured for his work for Nottingham Forest Community Trust as part of PL30 celebrations

Fourteen-year-old Emirah Burnett has been named as Nottingham Forest's Community Captain in recognition of his incredible support of other young people taking part in Premier League Kicks sessions and his role in youth social action in the local area.

The Community Captain accolade is being given to more than 100 members of the public who have made an outstanding contribution to their club and local community, as part of the Premier League's 30th anniversary celebrations.

Presentations to the Captains form part of the Premier League Trophy Tour, which is visiting more than 50 professional, non-league and women’s clubs across England and Wales who receive funding from the Premier League.

Former Premier League player Michael Dawson and England cricketer Stuart Broad were also in attendance. Emirah's name will also be engraved onto a plaque and added to a bespoke Premier League Trophy plinth created for the Tour.

Moran, who presented Emirah with the Community Captain award, said: "Emirah truly deserves to be called Nottingham Forest's Community Captain. Emirah joined the Trust’s Premier League activity in July 2021 and since then has attended 105 hours of activities and sessions.

"He goes above and beyond attending weekly Premier League Kicks sessions, taking part in social action activity and now volunteering at a local Sikh Temple to prep, cook and prepare meals for homeless people and those in the most need in Nottingham city centre.

"Huge congratulations to Emirah, our Community Captain, he's such a great young man and he shows the impact that the Premier League has on lots of young people in our City."

Premier League Chief Executive Richard Masters said: "As we mark 30 years since the Premier League first kicked off, it is important we celebrate the unsung heroes who deliver brilliant work in their communities. These people - whether they are participants, coaches, volunteers or long-time employees - are the lifeblood of their clubs and their communities.

"The continued success of Premier League football enables us to provide unprecedented investment in communities and wider football. As we look to the future, we are committed to investing more than ever, to help develop the game and provide opportunities to people of all ages."

During the Trophy Tour, the League will be announcing new financial commitments to benefit fans and communities. This includes increased investment into the Premier League Fans’ Fund, with £5m available to support fan engagement projects across the top four divisions of the football pyramid.

The tour will also give an opportunity to highlight new Premier League investment into women's and girls' football, including the Emerging Talent Centres announced earlier this summer.