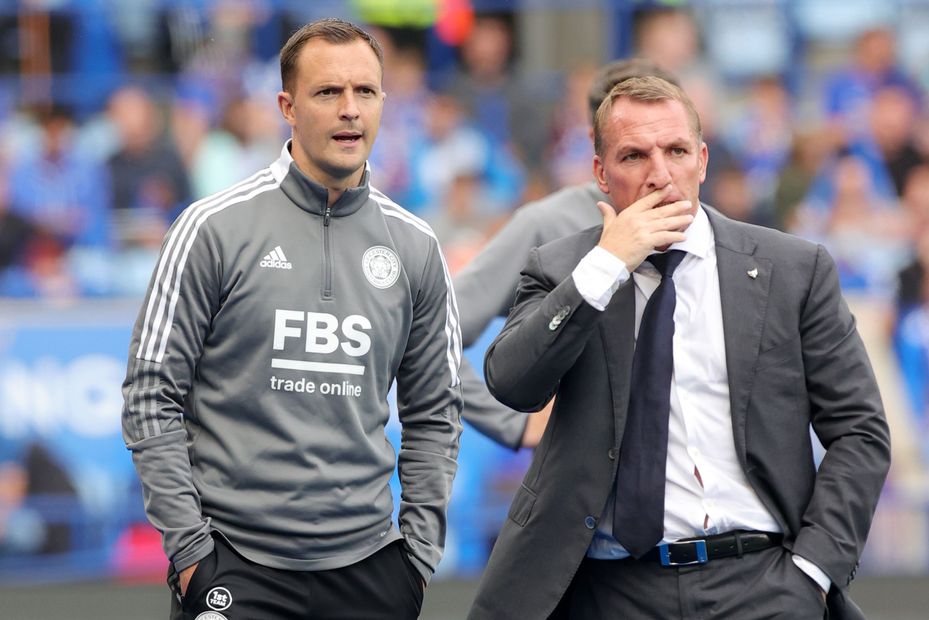 Hobbs: To help players we must help coaches
Binnion: Coaches must be authentic with their players
Jackson: Building connection with players is key to coaching

As part of this, we are showcasing in a series of articles how the Premier League is leading a positive change in the global perception of our coaching at academy and first-team levels, as well as increasing the diversity of the coaching workforce. This includes interviews with some of the talented coaches coming up the ranks at Premier League clubs.

Earlier this year, Adrian Clarke, spoke to Leicester City's Chris Davies, one of the most highly respected and successful young coaches in English football.

In 12 years working alongside Brendan Rodgers, first as a member of the backroom staff at Swansea City and Liverpool, before becoming his assistant at Celtic and Leicester City, the former Reading youth team player has played a part in several notable achievements.

Still only 37, Davies' CV includes a promotion from the Championship, a role in one of the most exciting Premier League title races this century, back-to-back domestic trebles in Scotland and the masterminding of a first ever FA Cup Final triumph for Leicester.

Taking time out of his busy schedule, Davies provides a wonderful insight into what it is like to be an assistant manager.

Here, he breaks down his role and responsibilities, as well as telling us what he has learned as a No 2.

"I will lead the training day to day. That means I'll plan the sessions and manage the other coaches Kolo Toure and Adam Sadler on it, plus goalkeeping coach Mike Stowell. I'll then present my ideas to Brendan every morning. Normally it's, 'Good, happy with that,' and off we go," says Davies.

"Brendan will oversee and observe the training sessions. He will only intervene when he feels there is something he needs to say.

"Over the years he has gone from being really hands-on, taking pretty much every training session, to now trusting the staff more to deliver what he wants before picking his moments to come in.

"When it comes to the day before a match, things are different. Brendan will lead that session with the players.

"That's his game-planning day where the final details are laid out for the players. As the manager, he is rightly at the forefront of putting across those messages. It is something he has always done.

"As coaches we are all guided by the game model the manager puts in place. We know what sort of team we want to create, so there are specific details we are trying to cover each day.

"We've built up a huge database of session plans that are all bespoke to us, which is so useful. In the last few years, for logistical reasons, I've transferred from handwritten sessions to computer database sessions and it saves me hours!

"The challenge for myself and for all coaches is to make sure we are adding variety. You must stay open-minded to other types of sessions and learning from other content, so we can keep bringing new things to the table.

"If players have seen it all and your repertoire is used up, things can go stale.

"One thing Brendan and I have always done is engage with the existing staff, too. At Celtic, for example, we leant on John Kennedy, who is a brilliant coach, with some great ideas and sessions of his own.

"Sadler was already here at Leicester and he's great. I'll also go on courses and conferences as often as I can.

More than an assistant

"A big part of my job is to make sure Brendan only hears what is absolutely necessary or relevant. The assistant needs to be a buffer.

"Managers at this level can get saturated with information and too many tedious little things – and that's not what they need. If somebody has got an issue and I can deal with it, then I will always try to do that and encourage them to come to me first.

"To be fair to Brendan, he's got a huge energy for work and a real interest in every part of the club. He's always open to people knocking on his door, but an assistant's job is try and protect the manager.

"I want to help him make the big-money decisions with the clearest mind possible.

"I don't like it when an assistant goes around waving their arms and telling everyone what to do on a match day. Let the manager manage. By doing that, you give his words more weight and authority with the players.

"Before a game, I like to remind people of their jobs and reinforce the manager's current message, whatever that may be.

"I feel I'm pretty good at motivating the players, so I can be quite vocal and loud inside the dressing room. That said, sometimes you need to be softer and talk to them about calmness and having the confidence to get on the ball and play.

"It's our job to feel that emotional atmosphere inside the room.

"Personally, I also like to go around individually to embrace each player before they go out, to get a sense of what they need.

"Do they need that bit of edge from me? Or do they need someone to tell them it's all going to be alright? We must make sure the players are in the optimal place when they go out onto the pitch to do their jobs.

"During games I take a step back and focus on things from a strategic point of view. I don't like to get too involved emotionally in this decision, that decision.

"I've got a little thing I write on a notepad WIHH (What Is Happening Here).

"It's my way of coming out of the battle and looking at this from a purely tactical point of view. What is going on in this game? What does our team need?

"I'll advise on that throughout the game with Brendan and try to add some value.

"At half-time the four of us will sit around together and chat for five minutes, while the players are settling down, before Brendan delivers his message.

"In the second half, it's primarily about substitutions, that's the main way you can affect the game. I may talk to the physios to check in on the physical status of certain players during this period too.

"You are making judgment calls under pressure in grounds that have big atmospheres, so there isn't time for long-winded debates.

"When I talk to Brendan during the game, it has got to be snappy, to the point and have a good rationale."

The value of experience in analysis

"All my experience was in youth coaching before taking a position as opposition analyst at Swansea when I was 25, and it was the best thing I could ever have done.

"In those five years [two at Swansea, three at Liverpool], my confidence grew enormously in terms of tactical awareness.

"To have real genuine knowledge meant I could go to a Steven Gerrard, a Jordan Henderson, any top player, with confidence, and talk to them about the game and be able to give them advice.

"I'm so pleased I did that job. There were times while I was doing it that I was wishing I was out there on the grass as a coach, but I wouldn't change it for the world.

"When I ended up at Reading as assistant manager, at the age of 30, I realised how valuable that job had been. Straightaway, I felt I could hold my own in conversations about tactics. My confidence soared and suddenly everything felt easy."

"I like to spend quality time analysing opponents and our own game. Those are the hard yards you need to put in, to deliver high-quality content and information back to the players. Analysing a match properly takes me three hours.

"Ever since my time at Liverpool, I've had individual player meetings and it's something I have continued since I became an assistant.

""I especially like working with midfielders because it was where I played, and it's probably the most complex position on the pitch in terms of the spaces around you."

"When I've got some clips to show them, I'll ask a player to come and meet me for a quick chat. It'll only usually be a 15-minute meet-up, where I pick out three things, max.

"Usually, I'd split my observations into two areas; decision-making and execution. Decision-making is tactics. Execution is technique.

"That development time, in the classroom if you like, is the most connection I have ever found with a player.

"By taking the time to go into detail about ways they can improve and feeding it back to them; that's a really strong relationship-builder between player and coach.

"They feel like you've gone the extra mile to help them and that's what players appreciate."

"Because of the spotlight and exposure players are under, I am always very conscious about how I need to act and what I need to say, depending on whether the team is going well or not.

"Top-level players are under tremendous scrutiny these days. Every pass they make can be seen and discussed around the world, with people critiquing everything they have or haven't done, so having empathy with them is crucial.

"If it goes too far and you become a cheerleader 'not going to help them though.

"There's a fine balance that I've got better with, the more experience I have gained."

"If there is one quality you need to build from to be a good assistant manager, it is loyalty. Trust has to be base.

"Without it, the manager can never relax and know you've got his back. I pride myself on loyalty and trust above anything else. I'm here to support the manager every day, in whatever way I can.

""We are all part of the same team, the same club, we all want the same thing but there are internal dynamics at play so it's important that I protect Brendan. I also need to lead at the right times too."

"You work very hard and dedicate yourself to the job, but it isn't actually your team and it's vital you remember that.

"As an assistant you have to be respectful of the boundaries and be aware it isn't your team. It belongs to the manager. They have all the pressure and responsibility.

"There's a bit of art to it, I guess. You need that huge work ethic and to embrace your key role in planning, but at the same time realise there are lines that can never be crossed.

"That is why the dynamic between manager and assistant is very complex."

"I don't think many people dream of being an assistant manager when they are older. Most want to coach their own team.

"When I first started working with Brendan, I did tell him that one day I would like to be a first-team manager. That was clear and it was a good starting point for us as a working relationship.

"That’s the path I still want to go down, to be a manager at the right time.

"Whilst I'm doing this job, though, and it is a wonderful job to have, I'll always be completely focused and loyal to Brendan, and to know my role."

Part 1: Betsy: Focus on being the best coach you can
Part 2: Why Arsenal lead the way for counter-attacking goals
Part 3: Hobbs: Support for coaches is incredibly important
Part 5: Binnion: Coaches must be authentic with their players
Part 6: Jackson: Building connection with players is key to coaching