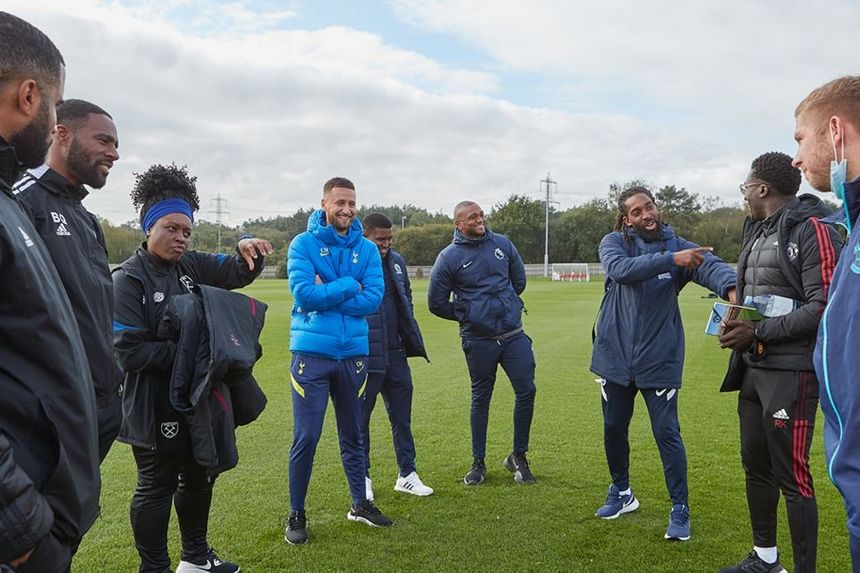 The Premier League launched its No Room For Racism Action Plan in February 2021. Here is what progress has been made one year on.

The Premier League set medium and long-term targets for its own organisation to increase diversity in leadership positions in all areas, creating a workforce which reflects the diversity of our industry and communities.

The Premier League is committed to creating new pathways for people from under-represented groups into Executive and Board roles in the League, clubs and related organisations.

Supporting The FA's launch of the Football Leadership Diversity Code jobs board is one example of how the League is working to remove barriers for candidates of all backgrounds looking to work in football.

Diversity has made the game stronger on the pitch and it is essential that this diversity is reflected in leadership roles across all areas of the game.

The Premier League is committed to targeted recruitment and succession planning to ensure the 2026 and 2031 targets outlined in the Action Plan are met.

Those targets represent a commitment to treating all staff and potential candidates fairly, regardless of gender or ethnicity, and a belief that a more diverse workforce drives business performance.

The Premier League is committed to increasing the representation of coaches from Black, Asian and minority ethnic backgrounds in coaching and other technical roles at senior levels in football.

The Premier League has continued to work with partners across football including The FA, EFL, PFA and LMA to deliver new coaching programmes which build a diverse cohort of future coaching leaders.

There are 36 participants now on the different inclusion schemes supporting careers in coaching.

These are long-term initiatives and as part of this strategy, the League is supporting black former players into coaching positions; 13 of the 36 coaches are former players.

The Premier League worked with football partners to launch the Coach Index in December 2021. This supports black, Asian, minority ethnic and female coaches with access to a self-registration platform, where coaching vacancies and learning and development opportunities in both the men’s and women’s professional game are signposted. More than 250 coaches are already registered on the platform.

The Premier League will continue to work with partners to achieve an agreed integrated diversity target for all coach-development programmes. This is currently in progress with the aim to achieve this by the start of next season.

The Premier League has established a Coach Advisory Group comprising current and former coaches to inform and guide the League’s work in this area.

The Premier League will work to ensure that every player has the opportunity to achieve their potential at Premier League Academies and in their future careers, whether in football or elsewhere, regardless of ethnicity or background.

The Premier League has begun its comprehensive study and collection of data to help identify areas where action can be taken and track progress.

The Premier League has identified the underrepresentation of British South Asian players as a priority area and will be announcing its strategy to address this issue later this season.

The Premier League has issued new discrimination protocols to all Category One and Two Academies. The protocols were created in collaboration with academy staff and players to ensure any abuse targeted at players, match officials, coaches or other participants is not tolerated and details how incidents should be reported.

The Premier League will continue to take action against all forms of racism so that football is a welcoming and safe environment for all participants and fans.

Significant progress has been made to combat abuse at matches and online.

For season 2021/22 Premier League clubs agreed to enforce new League-wide sanctions, including permanent bans for any individual found to have committed discriminatory or abusive behaviour at a match or online.

The Premier League launched its online discriminatory abuse reporting system in June 2020 to support players, managers and match officials who have received abuse and has worked with police, CPS and relevant law enforcement authorities to take legal action where possible.

In June 2021, a man in Singapore was found guilty of sending serious online abuse to Brighton and Hove Albion player Neal Maupay and was convicted of crimes relating to harassment following an investigation and formal criminal complaint filed by the Premier League.

The Premier League is committed to continue protecting players and do more to ensure that attending a Premier League match is a safe and welcoming environment for all.

The Premier League will:
- Develop a fan education programme on all matters of equality, diversity and inclusion
- Work with clubs to develop a central approach to data collection for discriminatory incidents at Premier League matches and online
- Continue working with the police and government to leverage legal action where possible

The Premier League is committed to using the appeal and reach of the League and clubs, working together to help children and young people reach their potential through education and creating pathways to opportunities.

The Premier League has worked with clubs to create new No Room For Racism educational resources, which are used by our national community programmes and across the Academy Education and Player Care network.

The teaching materials have been downloaded by more than 5,750 primary school teachers, engaging more than 170,000 pupils covering topics such as the importance of diversity, allyship and tackling online hate.

The Premier League and its clubs will continue to promote the resources to more than 18,500 primary schools, which is 84 per cent of primary schools in England and Wales.

In April 2021, the Premier League revised its existing Equality, Diversity and Inclusion Standard (PLEDIS) for all its clubs.

This Standard aligns with the principles of The FA’s Football Leadership Diversity Code and supports clubs in setting and achieving their targets for greater representation of currently under-represented groups.

Premier League rules state that all clubs must commit to achieving these standards and substantial progress has been made by clubs since the framework was first introduced seven years ago.

There has been significant engagement from clubs with the Standard by representatives from all areas of the game, including at Chief Executive and Board level.

The Premier League achieved the EY National Equality Standard in November 2021, a kitemark achievement for inclusive employers in the UK.