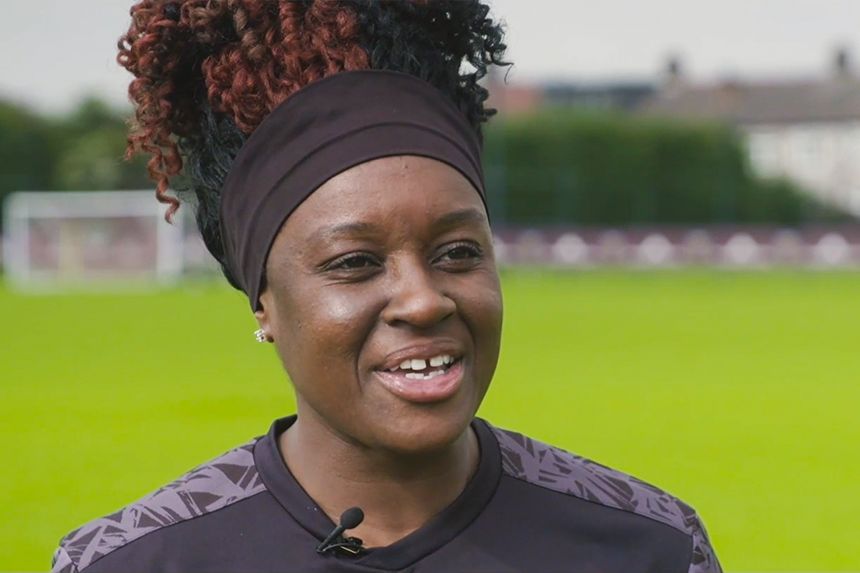 Farley joined the club in June as part of the Premier League's Coach Inclusion and Diversity Scheme (CIDS).

She is three months into a 23-month placement in a programme that aims to improve the equality, diversity and inclusion within the English professional game.

"If it wasn't for CIDS, people maybe wouldn't know that I could do this," she says. "I am good enough but this brings it to life.

"This programme is initiating change and it really resonates with me."

Farley is relishing using CIDS to help her development as a coach, passing on her knowledge to others as well as being a mentor and role model for the younger generation.

"It's not just, a little bit here, a little bit there, 'Thank you very much' and that's that. Sustainability is what is key to making this work and I'm excited for the journey."

Farley had worked in both men's and women's development football at clubs such as LA Galaxy in the Unites States, Reading, Arsenal and Chelsea and was eager to continue her development by applying for the programme.

"My ideas, my perspective, my diversity can add a value and a variety to the bigger goal"

As well as improving diversity, CIDS seeks to support the aim of the Premier League's No Room for Racism Action Plan and Elite Coaching Plan of improving pathways for coaches and creating a world-leading coaching development system in Academies and at first-team level.

During her time at West Ham, Farley will work with schoolboy and professional teams across the full range of Academy age groups, learning from the club's strong coaching workforce to equip herself better for future full-time coaching work.

"The main thing I have developed so far is giving my points of view to session ideas and demonstrating that," she says. "It is a safe space to express an opinion.

"It's about having the support and the information to be brave. You're here to embrace your difference so don't hesitate, don't hold back. It's OK to be your authentic self.

"I've also developed in terms of goal-setting and the coach development plan. It's tangible now.

"Before it would be goals written down on sheets of paper but now you realise, this pathway is going to boost me to keep progressing."

As well as having a significant impact on her, Nicole believes CIDS will have a wider role in inspiring the next generation of coaches and players.

"On and off the pitch, being able to show your skill set is huge because I can do it, I believe it and now I can inspire somebody else," she says. "It's different ideas and different perspectives to come into the same common purpose: we want to develop professional players.

"My ideas, my perspective, my diversity can add a value and a variety to the bigger goal.

"We can speak about an issue that we both understand. We can have that common ground. That's bigger than the football and that's why it is so powerful."

Being part of CIDS is part of West Ham's commitment to championing equality, diversity and inclusion across the club.

The club were recently awarded the Premier League's Equality Standard Advanced level while their Staff Equality Forum supports the work of the Equality Strategic Group and is already helping to ensure that equality is embedded at every level of the organisation.