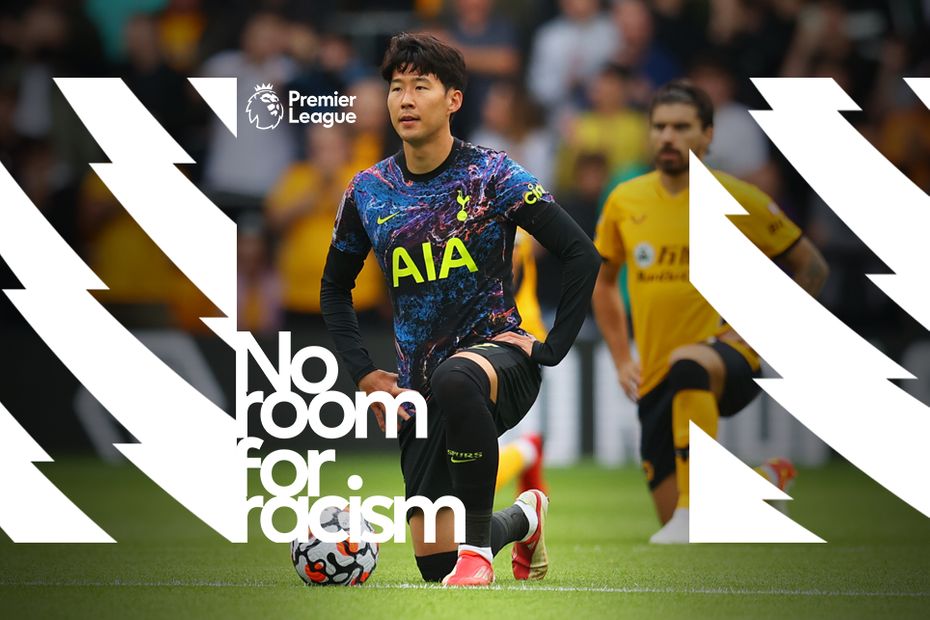 The Premier League launched its No Room For Racism Action Plan in February 2021, outlining a series of commitments aimed at creating greater access to opportunities and career progression for Black, Asian and other minority ethnic groups in football, and actions to eradicate racial prejudice.

Premier League Chief Executive Richard Masters said: "Football is a diverse sport, which brings together communities and cultures from all backgrounds. This diversity has made the game stronger on the pitch and it is vital we ensure this is reflected across all areas of the game.

"The No Room For Racism Action Plan underpins the Premier League’s continued commitment to promoting equality and tackling discrimination. It builds on the wide-ranging work undertaken by clubs, aiming to ensure that everyone can achieve their potential, regardless of background.

"There is no place for racism in our sport and the Premier League will continue to take action against all forms of discrimination so that football is inclusive and welcoming for all."

Action across all PL activity

This action plan will be embedded across all Premier League activity, supporting the League’s ongoing No Room For Racism initiative.

It has been closely co-ordinated with the principles of The Football Leadership Diversity Code, which will be integrated into the Premier League Equality Diversity and Inclusion Standard that clubs have worked to achieve over the last six years.

Match rounds have been dedicated to urging fans to take action - to challenge and report racism - and a series of education programmes are provided for fans and primary schools.

This work to promote racial equality sits alongside the wide-ranging action the League and clubs undertake in other areas of diversity and inclusion.

This Action Plan has been developed in partnership with the Premier League's Equality Advisor to the Board, Paul Cleal, and was given unanimous support by the 20 Premier League clubs at last week’s Shareholders' meeting.

The Premier League is committed to increasing diversity in leadership positions in all areas, creating a workforce which reflects the diversity of our industry and communities.

The Premier League will create new pathways for people from underrepresented groups into Executive and Board roles in the League, clubs and related organisations.

The Premier League is committed to increasing the representation of coaches from Black, Asian and minority ethnic backgrounds, in the process addressing the historic underrepresentation of Black former players in coaching and other technical roles at senior levels in football.

The Premier League will continue to work with partners across football including the FA, EFL, PFA and LMA to set targets and deliver programmes for underrepresented groups to improve career opportunities and pathways. This will develop more Black, Asian, minority ethnic and female coaches who can succeed at the top level of English football.

This includes an agreed integrated diversity target for all coach development programmes and licensed courses, which will be announced later this year.

The Premier League will work to ensure that every player has the opportunity to achieve their potential at Premier League Academies and in their future careers, whether in football or elsewhere, regardless of ethnicity or background.

The Premier League will conduct a comprehensive analysis to identify areas where action can be taken to widen access, enabling progression of the best talent and improving career outcomes as players or outside football.

The Premier League is committed to using the appeal and reach of the League and clubs, working together, to help children and young people reach their potential by promoting aspiration, education and pathways to opportunities.

The Premier League will continue to invest via the Premier League Charitable Fund (PLCF) in the clubs’ inclusive community programmes such as Premier League Kicks, supporting participants’ personal and social development and increasing opportunities to progress into employment inside and outside football.

The Premier League is reviewing the community workforce and creating initiatives that generate diversity of leadership and inclusiveness of delivery.

The Premier League will continue to take action against all forms of racism so that football is a welcoming and safe environment for all participants and fans.

Action includes:
- driving awareness and action among fans through the year-round No Room for Racism initiative
- education of fans, children and young people
- making reporting of abusive and discriminatory behaviour easier and more effective
- improving enforcement and the effectiveness of sanctions, whether offences occur in stadiums or online

The Premier League, clubs, PGMOL, the PFA, LMA and supporter organisations will continue to work together to promote equality and inclusion ensuring stadiums are free from discrimination and provide welcoming environments for all fans.

The Premier League has adopted a transparent approach to driving equality, diversity and inclusion and will provide clubs with a clear framework for achieving and reporting progress against agreed EDI targets.

The revised Premier League Equality Diversity and Inclusion Standard (PLEDIS), which aligns with The Football Leadership Diversity Code, will support clubs in setting clear targets for greater representation of underrepresented groups and providing guidance on how they can be achieved.

See: No Room For Racism Action Plan Commitments in detail