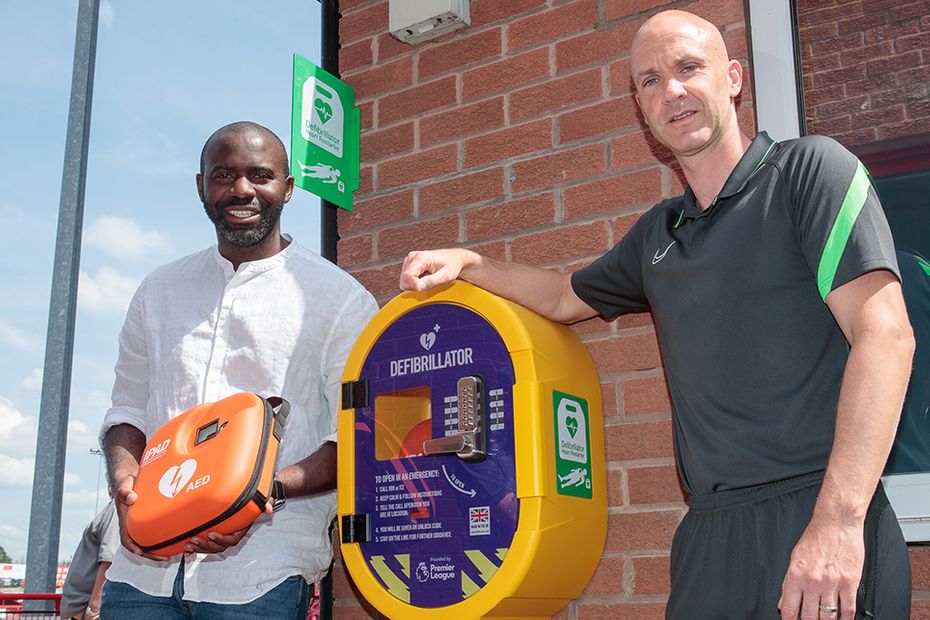 Nine years ago, former Premier League player Fabrice Muamba suffered a sudden cardiac arrest on the pitch while playing for Bolton in 2012.

And so earlier this year, he jumped at the chance to promote the opening of Premier League Defibrillator Fund applications for grassroots clubs by attending the installation of a defibrillator at Altrincham FC.

"I know from personal experience the importance of having access to this type of medical equipment, which is why I am a big supporter of the Premier League's initiative to fund defibrillators for thousands of grassroots football clubs and facilities," he said Muamba, who made 167 PL appearances for Arsenal and Bolton.

In the summer, the Premier League announced it will be providing Automated External Defibrillators (AEDs) to more than 2,000 grassroots clubs and facilities, with the aim of helping save the life of someone experiencing a sudden cardiac arrest.

Altrincham FC is one site to benefit from the first round of applications, which was open to Football Foundation-funded facilities without a life-saving device onsite.

Grassroots clubs who own their facilities can apply for an AED. Once installed, these devices will be accessible, if required, to an estimated 1.5million people across the country per season.

Muamba was joined at Altrincham by Premier League referee Anthony Taylor, was the official when Christian Eriksen collapsed during the Denmark v Finland game at this summer's UEFA 2020 Euros.

'Brilliant for the community'

"The Premier League being able to provide life-saving equipment across grassroots football really is vital, so I fully support their Defibrillator Fund," Taylor said.

"Christian's collapse at Euro 2020 highlighted to us all that a sudden cardiac arrest can happen to anyone at any time.

"My daughters and I are season ticket-holders at Altrincham, so it's brilliant for both the club and community that a defibrillator has been installed here."

The event was supported by a member of The FA's medical team, who conducted a CPR training session for Altrincham FC first-team players, women's players and club and community staff.

The defibrillator installed at Altrincham FC is not the first time the Premier League has supported the National League club.

They have benefited from Football Stadia Improvement Fund grants totalling more than £660,000, which has most recently included surface work and a new drainage system for their pitch.

"I'd like to say a heartfelt thank you to the Premier League for this defibrillator," said Altrincham FC in the Community Director Peter Foster.

"We're a relatively small club but we probably get around 100,000 people coming through the doors a season, from players and spectators to users of the sports hall and staff.

"Any one of them could be required to use a defibrillator and while we hope it's never used, knowing that the Premier League have been able to provide us with one, in case it is needed, is brilliant."

Since forming the Football Foundation in 2000 along with The FA and Government, the Premier League has contributed £364m towards community sports pitches and facilities.

This has leveraged total investment of more than £1.6bn in grassroots football.

How clubs can apply

Grassroots clubs who own their facilities and want to apply for a defibrillator should head to the Football Foundation website and use this form to check their eligibility for an AED.

If eligible, clubs can place their order.

At least 12 young people, aged between 12-35, die of undiagnosed cardiac conditions in the UK every week. Over 30,000 people of all ages suffer a cardiac arrest outside of hospital every year and less than one in 10 survive.

While defibrillators are designed to be simple to use, each grant recipient will be required to have at least one person successfully complete The FA Education’s free online Sudden Cardiac Arrest course.

The Premier League is working with partners at The FA and Sport England to ensure facility developments funded by the Football Foundation incorporate this equipment in the future.