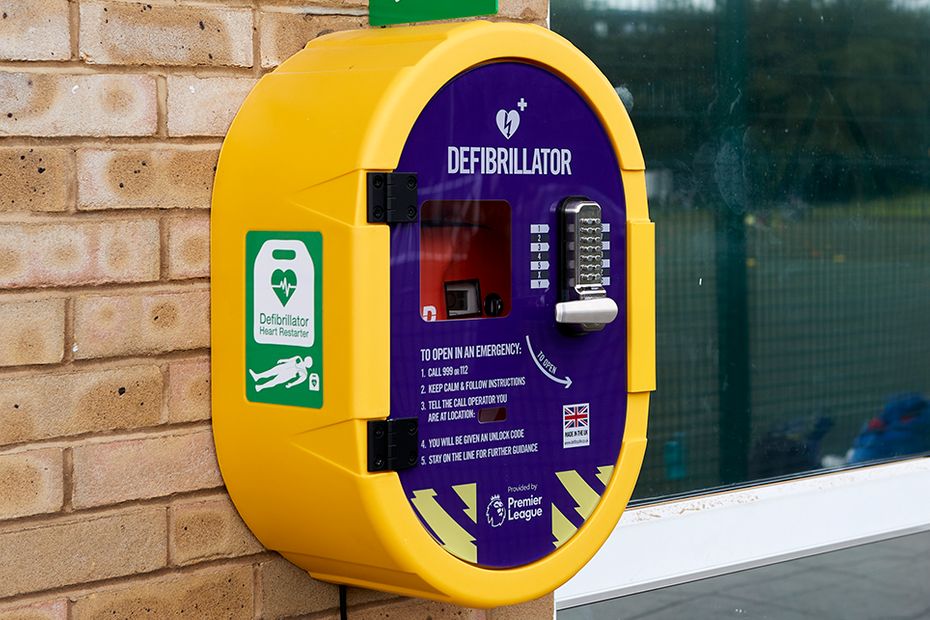 The Premier League began the rollout of its Defibrillator Fund this week with an installation at Southfields Academy.

The Premier League announced last month it will be providing Automated External Defibrillators (AEDs) at more than 2,000 grassroots clubs and facilities, with the aim of helping save the life of someone experiencing a sudden cardiac arrest.

Southfields Academy was one of the sites to benefit from the first phase of applications, which was open to Football Foundation-funded facilities without a life-saving device onsite.

"We are committed to a quick rollout of the defibrillators we have funded and it was great to see the first one installed this week," said Premier League Chief Executive Richard Masters.

"Supporting the welfare of participants at grassroots facilities is a priority, so having these devices at sites up and down the country, and providing training opportunities for using them, could make the difference in saving somebody’s life."

At an event to mark the installation, Chair of the Premier League Doctors Group and Crystal Palace club doctor Zaf Iqbal spoke of the importance of AEDs.

He was joined by members of The Football Association's medical team, who conducted a CPR training session for participants on AFC Wimbledon's Premier League Kicks programme, which takes place at the facility. The Labour MP for Putney, Fleur Anderson, was also in attendance.

"Making defibrillators accessible at grassroots football facilities across the country is hugely important," said Dr Iqbal. "This equipment is vital in helping someone who goes into a sudden cardiac arrest, as is the education around how this equipment is used.

"Every minute's delay in using a defibrillator in a cardiac arrest results in around 10 per cent decreased chance of survival, while in some cases performing CPR can more than double the chances of survival.

"So, the more we can do, via the Premier League, to raise awareness around this life-saving equipment and CPR, the better."

At least 12 young people, between the ages of 12-35 years, die of undiagnosed cardiac conditions in the United Kingdom every week.

Over 30,000 people of all ages suffer a cardiac arrest outside of hospital every year and less than one in 10 survive.

Southfields Academy is a school site which has previously benefited from Football Foundation funding from the Premier League, The FA and Government.

The school received a grant of £449,116 grant towards a full-size 3G pitch and changing pavilion block, which was completed in December 2011.

"This facility is used year-round by our pupils and the local community, so it is great that we have been able to apply for a defibrillator from the Premier League and that this has been installed so quickly," said Southfields Academy Principal Jacqueline Valin.

"It is a fantastic asset that will be of reassuring benefit to all who use these pitches."

The next phase of applications for the Premier League Defibrillator Fund will open in early August, when grassroots clubs that own their facilities will be able to apply for an AED.

Once installed, the AEDs will be accessible, if required, to an estimated 1.5million people who use these facilities per season.

While defibrillators are designed to be simple to use, each grant recipient will be required to have at least one person successfully complete The FA Education’s free online Sudden Cardiac Arrest course.

The Premier League is working with partners at The FA and Sport England to ensure that facility developments funded by the Football Foundation incorporate this equipment in the future.

Since forming the Football Foundation in 2000 along with The FA and Government, the Premier League has contributed £364m towards community sports pitches and facilities.

This has leveraged total investment of more than £1.6billion in grassroots football.

Find out more about how to complete The FA Education Sudden Cardiac Arrest online course.