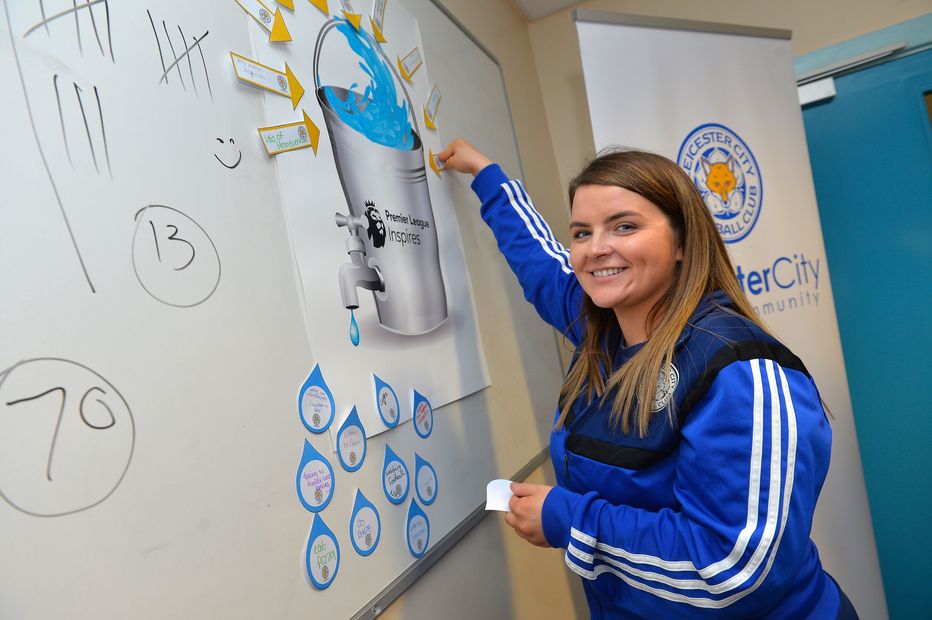 Providing support for pupils at Thomas Estley Community College was taken to a new level during the pandemic by Amelia Paynter, a PL Inspires co-ordinator for Leicester City in the Community (LCitC).

In her role with LCitC's Premier League Inspires programme, Amelia normally focuses on face-to-face, small-group and individual mentoring with youngsters at the school who have self-esteem and confidence issues.

But during lockdown, Amelia and staff from LCitC - the charitable arm of Leicester City - continued to offer consistent support in a number of different ways including remote learning and regular phone calls to pupils.

This outreach work at Thomas Estley and other local schools proved invaluable during an unsettling time.

"Young people's lives were turned upside down," Amelia says. "They were doing all their learning at home.

"That one phone call a week was a different voice, someone to check in, to ask the questions and to just see where they need the support, which is what they are used to in 'normality'.

"It was really good to carry that on and have that connection with them."

Thomas Estley was one of the first secondary schools in the region to undergo mass daily testing for its pupils.

And with every member of staff and pupil tested twice weekly, Amelia played her part in ensuring the school remained a safe environment to learn in.

As well as providing practical support during lockdown via the PL Inspires programme, Amelia stepped up to train as a rapid flow tester.

"With rapid flow it's not necessarily something I would have signed up to as an Inspires coach," Amelia added. "It's working with young people, but actually it was exactly what the school needed."

Her willingness to adapt to the ever-changing challenges faced by the school during the pandemic has not gone unnoticed by Thomas Estley principal Mandi Collins.

"Amelia was really involved with our students most at risk of disengagement, so students who wouldn't be able to make good progress because of their issues of self-esteem and confidence," she says.

"We had to redeploy all of the non-teaching staff [to help with testing] and she was very much a part of that. We talk about the Thomas Estley family and Amelia has fitted in brilliantly as part of this family."

Leicester are one of 31 clubs who currently run the Premier League Inspires programme, which uses the appeal of football and the club badge to deliver a high-quality education curriculum that inspires students to succeed and excel academically, physically and socially.

Part 1: How Man City help young people find their voice
Part 2: Fulham teaching Franklyn the value of teamwork
Part 4: 'PL Inspires has given me something to look forward to'
Part 5: Morgan using PL Inspires message to help others
Part 6: Emily focused on the future thanks to PL Inspires
Part 7: PL Inspires celebrates impact of social-action projects