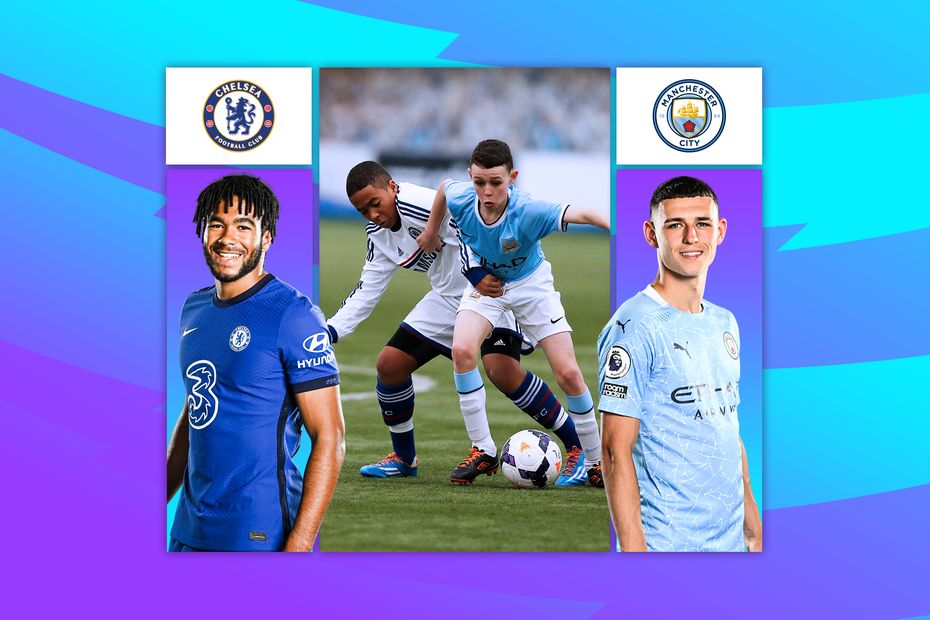 When Chelsea and Manchester City go head-to-head in the UEFA Champions League final on Saturday, the two teams will be familiar with each other not only from past Premier League meetings but also from contests some of the players have had from an early age.

Chelsea defender Reece James and Man City's Phil Foden are set to refresh a rivalry that has lasted more than eight years down to youth football.

The two faced each other playing for the same sides in a Premier League National Under-14 Tournament final back in 2013.

These tournaments and the pair's development at the Academies since have come under the umbrella of the Premier League's Elite Player Performance Plan (EPPP), which is in its 10th year and has helped to bring through a new generation of talented English players.

"These young players have been in our Academy system since an early age and have had access to elite coaching and best games programme competitions.

"They have been working on this for a long time. So to step out in a Champions League final is something that they will certainly be relishing."

Foden and James are not the only products of the two clubs' Academies who are set to be involved in Porto.

Almost a quarter of the players who helped get their teams in the final are English homegrown, while almost 30 per cent are homegrown players.

Chelsea's Mason Mount, Tammy Abraham and Callum Hudson-Odoi all joined the club's Academy at the age of six or eight. For City, Eric Garcia joined at Under-18 level, while Nathan Ake came through Chelsea's Academy.

Saunders says the presence of these players shows the positive impact of the EPPP, which was launched in 2012 after England's failure to qualify for the 2008 UEFA European Championship and has featured more than £1billion of investment by clubs, not just in facilities but in coaching as well.

"The Elite Player Performance Plan was launched with a long-term plan to ensure the Premier League and our clubs continued to develop more and better homegrown players," he says.

"The plan was focused on a number of principles ensuring increasing strategic investment in the Academies. We've improved the coaching provision available to the players from 250 full-time coaches in 2012, to 800 full-time coaches now.

"Importantly, the contact time our clubs have to work with to develop the young players has increased about 40 per cent. We're seeing the fruits of that labour and investment in time and commitment by our clubs in the performances of the many young players now making their mark in the Premier League."

Competing on a global stage

The League has focused on the goal of having clubs' homegrown players play alongside and on opposition to the best foreign players. This has the aim to improve their standards and build Premier League and national teams that can compete on a global stage.

Saunders says statistics from the past season show homegrown players are able to compete against the best of the world.

"On average, 38.2 per cent of Premier League starters were eligible to play for England during 2020/21, the highest figure for the 12 seasons that this has been recorded," he says.

"Fifteen per cent of all minutes in the Premier League have been made up by homegrown players aged under 23, which is significantly up on the five-season average."

Naturally, not all players from clubs' Academies are able to reach the first team and Saunders stresses that, while the EPPP is geared towards developing better homegrown players, it also is tasked with ensuring that those who come through Academies are given holistic development on and off the pitch.

A recent survey of parents of boys at club Academies found 93 per cent felt their children were receiving a positive experience at their Academy.

"We're really proud parents feel their sons are having positive experiences in our Academies," Saunders says. "Obviously, we would like to see that number rise to 100 per cent, but it feels like we're starting from a positive foundation and it is something we are committed to building on as we look to the seasons ahead.

"We continue to work to ensure the football development programme in place for young players is meeting their needs so the next generation of Premier League players are being developed and educated in the right way.

"The success of the Academy system will ultimately be judged on firstly the quality of players coming through to play in our first teams and for the national team as well as the experiences the players have in the system, regardless of whether they progress into the professional game or not.

"But regarding the experience of those players who don't make it into the Premier League and our clubs, we have wide-ranging duty-of-care provisions in place to ensure all Academy players are supported.

"We have full-time staff dealing with education, safeguarding and player care. They are all working to ensure our Academies are safe, caring and inclusive environments. But they also support players' mental and emotional wellbeing to ensure they are having a positive experience."

After the UEFA Champions League final, football fans' eyes will turn to the 2020 UEFA European Championship, where England will be hoping for a first international triumph since 1966.

Saunders says the success that players in Southgate's squad have had for England at youth level offers excitement to fans such as him.

"We have a generation of young English players who are exceptionally talented," he says. "A number of them have experienced success in in 2017, when the Under-17s and Under-20s won the World Cup and the Under-19s won the European Championship.

"Phil Foden and Mason Mount among others took part in those competitions, so they go into the Euros with experience of big-game moments.

"Ultimately, it is knockout football and the margins are very fine but I think we can be excited about the talent we have at our disposal and in terms of Gareth and his team are a fantastic group of people to whom we wish the best of luck."