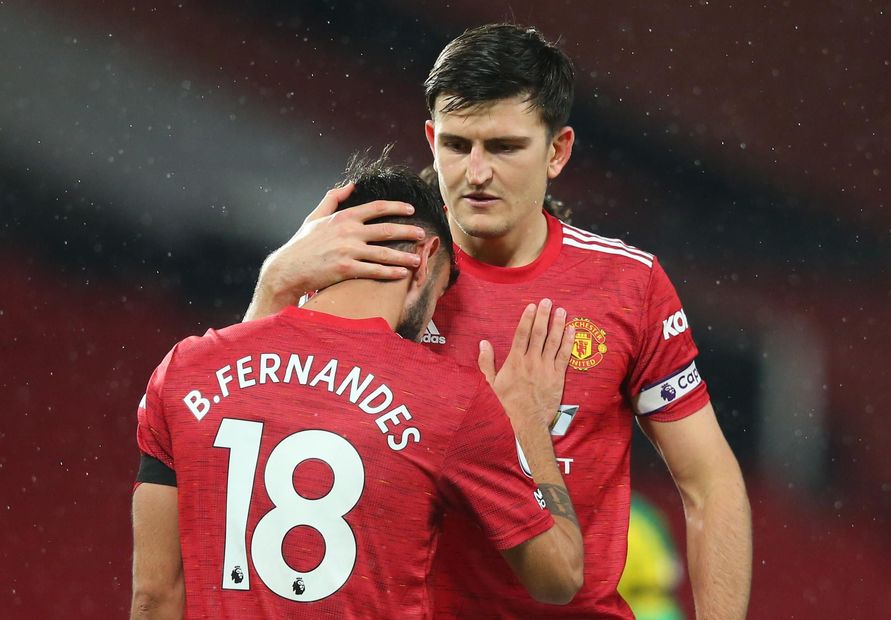 Harry Maguire (£5.5m) is the only player to start all of Man Utd's 33 matches this season ahead of their trip to Aston Villa and home encounters with Leicester City and Liverpool.

His potential for attacking returns is further highlighted by the underlying numbers.

Maguire has produced 32 shots in the box in 2020/21, eight more than any other defender in Fantasy.

Fernandes, the top-scoring player in Fantasy, is handed the armband, with Mohamed Salah (£12.7m) named vice-captain.

The Crystal Palace No 1 was a huge success in his previous meetings with his Double Gameweek opponents Sheffield United and Southampton. Guaita claimed 17 points over those matches, thanks to two clean sheets, a save point and four bonus points.

The Leicester wing-back faces Newcastle United and Man Utd in strong form at both ends of the pitch. Castagne has earned 22 points across his last three appearances, delivering a goal, an assist, a clean sheet and three bonus.

An ownership of only 6.2 per cent makes him a handy differential pick for his Triple Gameweek.

Man Utd’s playmaker produced double-figure hauls in the reverse fixtures against two of his upcoming three opponents. Fernandes has started 32 of his side’s 33 matches and looks the least likely of their attackers to be rotated.

Three goals in his last three starts have taken Liverpool’s Egyptian to 20 for the season, bettering his tally of 19 from last term. Salah’s 11 shots in the box and four big chances both rank among the top four players over the last four Gameweeks.

The teenager offers an in-form armband alternative to Fernandes for managers chasing mini-league rivals. Greenwood has four goals and an assist in Man Utd’s last four matches, claiming 35 points to the Portuguese’s 12.

Southampton's playmaker faces Liverpool and Crystal Palace on the back of a goal, an assist and 15 points in the last two Gameweeks. Ward-Prowse is also on penalties for Saints, with Danny Ings (£8.4m) sidelined through injury.

The Everton striker visits West Ham United and Villa sides who are both without a clean sheet in seven matches. Away from home, Calvert-Lewin’s total of 15 big chances is more than any other player in Fantasy.

Villa’s forward goes into Double Gameweek 35 in his most consistent form of the season. Watkins has attacking returns in five successive appearances, scoring three goals and producing two assists.

The Leicester striker has nine goals, two assists and 73 points in his last eight matches. From Gameweek 26 onwards, Iheanacho’s totals of 34 shots, 22 shots in the box and 16 shots on target all rank among the top two players in Fantasy.