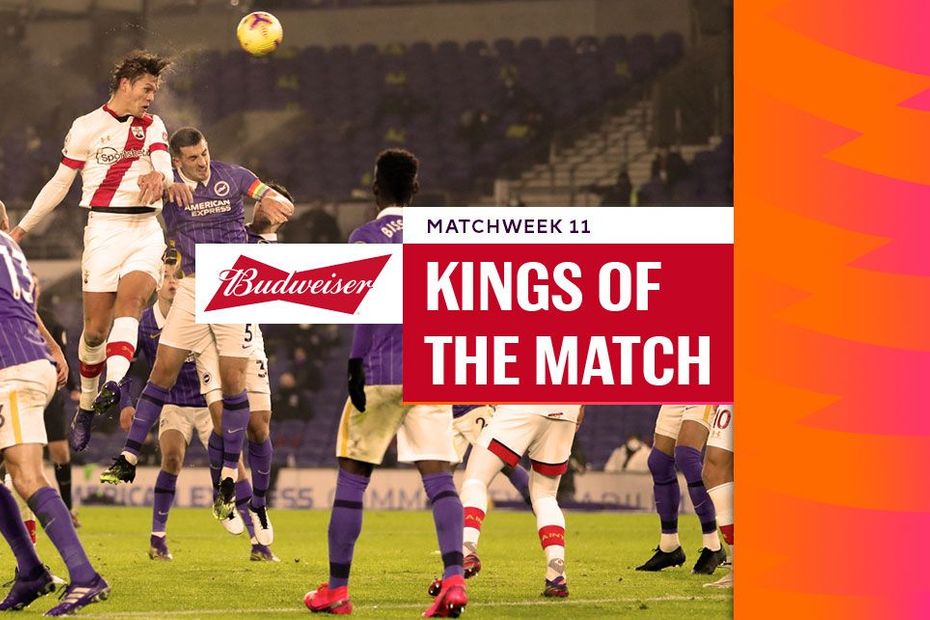 See which players earned the backing of supporters, including Southampton defender Jannik Vestergaard

Supporters voted in their thousands to crown their Budweiser Kings of the Match in Matchweek 11.

The Premier League's top scorer struck his 11th goal in as many matches to earn Everton a draw and win 82.7 per cent of the vote.

The Belgian claimed 70.9 per cent of the vote after scoring one goal and creating another in Manchester City's win over Fulham.

Despite playing only one half, the Portuguese midfielder changed the match, assisting one goal and making eight key passes to earn almost three-quarters of the vote.

More than 40 per cent of fans selected the defender after he scored his fourth goal of the season.

Zaha was a constant threat on his return to the Crystal Palace side, scoring two goals to pip Christian Benteke to the award.

Vardy was the clear winner with 81.2 per cent of the vote after he scored a 90th-minute winner in his home city.

The South Korean's brilliant strike and assist earned him two-thirds of the vote as Tottenham Hotspur went top with a north-London derby win.

The Egyptian scored the opener and set up Joel Matip's headed third to take 70.5 per cent of the vote.

The centre-back was voted the star after heading in a terrific equaliser then playing the pass that led to Southampton's match-winning penalty.