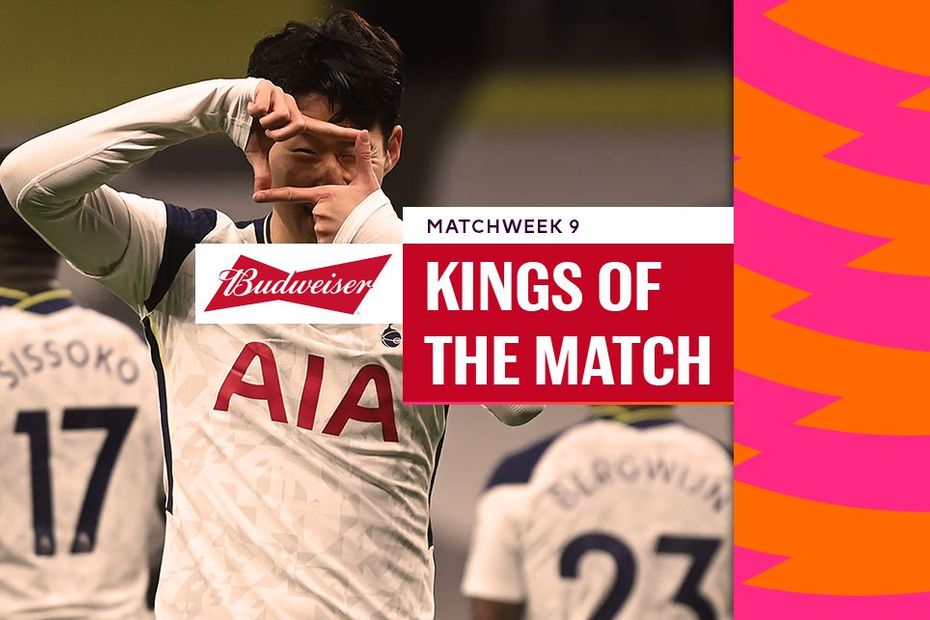 See which players earned the backing of supporters, including Spurs' Son Heung-min

Supporters voted in their thousands to crown their Budweiser Kings of the Match in Matchweek 9.

The Chelsea defender played his part in another clean sheet in the victory at St James' Park, earning 45.6 per cent of the vote.

Aston Villa's captain had an impressive 82 per cent pass completion rate, and polled just over half of the vote.

The Tottenham Hotspur star struck his ninth goal of the season and claimed over 80 per cent of the vote.

The Portuguese midfielder took a huge 81 per cent of the vote as his penalty proved decisive at The Hawthorns.

Calvert-Lewin's two goals against Fulham took him to the top of the Premier League scoring chart with 10, and earned him 83.3 per cent of the vote.

The defender's contribution to West Ham United's clean sheet against Sheffield United was enough for him to beat goalscorer Sebastien Haller to the award.

The goalkeeper made four crucial saves to help 10-man Arsenal secure a point, and was rewarded with 37.5 per cent of the vote.

Jota broke a club record by scoring for the fourth successive top-flight Liverpool home match and was chosen by just over half of the voters.

Pope's stunning stoppage-time save from Christian Benteke ensured Burnley claimed their first win of the season. He won 65.8 per cent of the vote.

McCarthy became the third goalkeeper to win the award after pulling off a succession of stops against Wolverhampton Wanderers and taking 31.2 per cent of the vote.