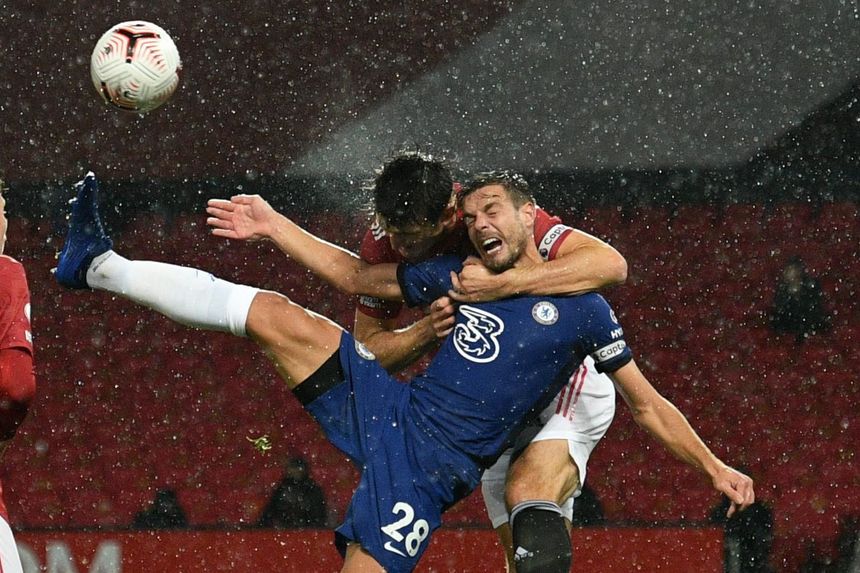 Former Premier League referee Chris Foy explains the processes behind the decisions made by the on-field match officials and Video Assistant Referees from Matchweek 6.

Incident: Chelsea felt they should have had a first-half penalty when Harry Maguire held down Cesar Azpilicueta in the penalty area during a corner.

Foy’s view: This was difficult for the on-field match officials to see as both players were challenging for the cross, but the footage shows Maguire is clearly holding down Azpilicueta, affecting his ability to play the ball.

Incident: Fulham forward Aboubakar Kamara is shown a yellow card for a challenge on Ebere Eze. That was upgraded to a red card after the VAR recommended the referee look at the challenge again at the RRA.

Foy’s view: You can understand why the referee saw it as a yellow card on-field, but the VAR has the benefit of looking at the replays and seeing the high and full point of contact on the back of the leg. Kamara is unfortunate because there’s clearly no intent, but he has endangered the safety of Eze, and you can fully understand why the referee has changed it to a red card.

This was good process and the right call.

Incident: Lucas Digne is shown a straight red card for catching Southampton full-back Kyle Walker-Peters on the back of the leg.

Foy’s view: This is not dissimilar to the Kamara red card. Again, there’s no intent from Digne, but intent is not something the referee or VAR take into account. Digne treads on the back of Walker-Peters’ leg. Again the contact is high and full and has endangered Walker-Peters’ safety, and, for me, you can understand why he’s been shown a red card for serious foul play.

It’s consistent with the Kamara decision. The VAR would have looked at the incident, and said, “Check complete”, confirming the red card judgement.

Incident: Arsenal striker Alexandre Lacazette scored with a near-post header, but the assistant referee flagged Granit Xhaka offside as he was stood next to Kasper Schmeichel.

Foy’s view: The on-field decision here was offside, and you can understand why the assistant has raised the flag, as he can see that Xhaka is stood in an offside position and has affected Schmeichel’s ability to save the ball. The VAR has looked at this and agreed with that decision.

The complication comes when you look at the replays and you can see Schmeichel steps away from Xhaka and so it becomes subjective as to whether he does impact him.

You do also have to consider Leicester’s James Justin at the back post, who does hesitate when looking to clear the ball. You can ask the question whether that hesitation was caused by Xhaka being there.

It’s a difficult call to make and the VAR is satisfied there is evidence of an impact. Ultimately, whichever way you fall, one team would have felt aggrieved, so sticking with the on-field judgement is fair.

Incident: Fabinho fouled Oli McBurnie on what looked to be the edge of the area. Referee Mike Dean awarded a free-kick, but the VAR factually told him the incident happened on the penalty area line, and therefore a penalty should be awarded.

Foy’s view: This was really good use of VAR. From Dean’s angle, it looks as if the foul is committed just outside the area. The VAR has the benefit of checking exactly where the contact was made, and McBurnie’s foot was on the penalty area line. This means, factually, it’s a penalty.

The foul itself remains subjective, and while Fabinho does make contact with the ball, his trailing leg clearly brings McBurnie to the ground. Therefore it’s not a clear-and-obvious error to award the foul.