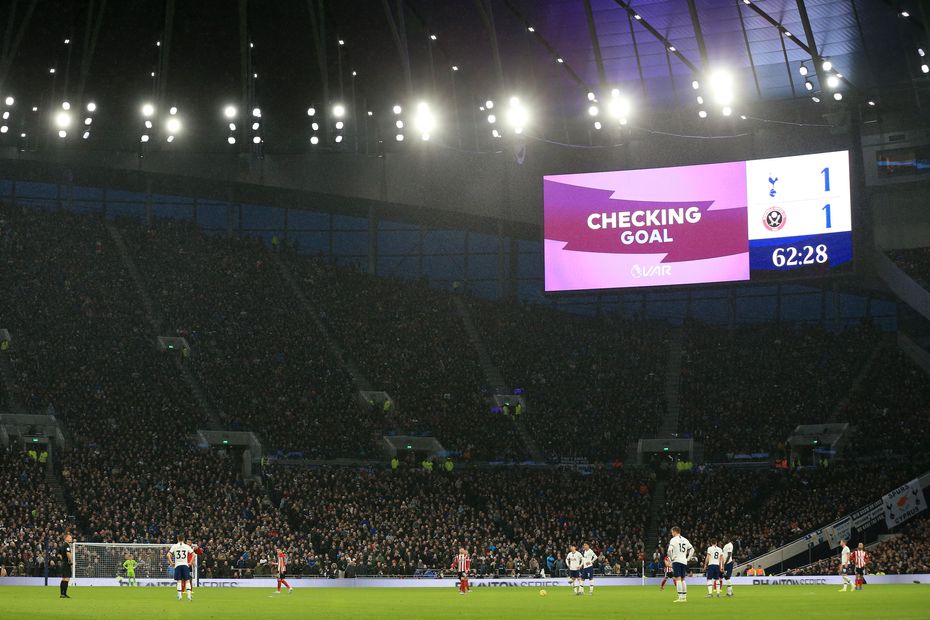 In the Premier League, offsides are determined by the VAR using Hawk-Eye’s virtual offside line technology.

This has two levels.

A two-dimensional line, which can be quickly positioned in line with the final defender for clear offside decisions.

These are two lines that are positioned for the defender and attacker.

The lines can also take into account parts of the body off the ground, which is shown as a 3D vertical line.

The positioning of the crosshair is manual, with a line one-pixel wide, so that the exact position of the offside line and the relevant body part can be accurately identified by the VAR.

To begin with the two lines, attacking and defending, are coloured yellow and black. In this state, the VAR can change the position of each line. These lines are not the final confirmed position.

From the 2021/22 season, the process was tweaked as part of an adjustment to the implementation of VAR.

Firstly, for marginal offside decisions, after the one-pixel lines are applied, the VAR puts on the thicker broadcast lines and where they overlap, those situations will now be deemed as onside.

In the first two seasons of VAR, the Premier League displayed the whole process of the VAR determining the offside call to broadcasters, who could share with viewers.

For 2021/22, all that will be shared with viewers is the final image confirming the decision of offside or not.

This process is similar to the one in place at UEFA Euro 2020 and other international competitions.

Before each match, Hawk-Eye calibrates multiple cameras to give many options when showing an offside decision in the event that a body part is covered in one camera.

For the Premier League, five cameras are calibrated: the main wide camera, both 18-yard box cameras and both goalline cameras.

The example below shows how the defender’s foot cannot be seen on the 18-yard box camera as it is blocked by another defender’s body.

Therefore the goalline camera was used as both the defender and attacking body parts could be clearly seen.

Hawk-Eye can also use any broadcast camera to identify the point of contact with the ball by the attacker, and synchronises all cameras for this purpose.

The broadcast cameras operate with 50 frames per second, so the point of contact with the ball is one of those frames inside the 50 per second.

Premier League pitches have a camber on the side of the pitch, designed to drain water.

Before the season, the pitches are calibrated by Hawk-Eye, creating a 3D model of each of them, which is then maintained during the matches.

Hawk-Eye's offside line matches the camber of the whole pitch to ensure as accurate a decision as possible.

Why do VAR lines sometimes look not straight?

A lot of it is down to the camera angle and perspective. Unless a broadcast camera is perfectly in line with the last defender, the camera angle can make him appear to be further back or forward than he is in reality of the horizontal line drawn.

In the photo below, Eric Dier's left knee is his body part that is furthest back, but the camera angle makes his head appear closer to the goalline.

This is also true of the vertical line drawn with respect to gravity adjudging offsides. This will only appear straight if the camera is in line with the offside incident.